Poop doping could be the latest performance enhancement craze

“Eventually, she learned that her microbiome (the colony of microbes in her body) was dangerously unbalanced and was not functioning as it should.” This is not saying “She thought this might be unbalanced” it says she learned it was unbalanced.

She is a microbiologist. Are you?

This is you, responding to Jonathan Eisen, asking him if he’s a microbiologist. Later in your post you assume that the postdoc in the story knows more than him. Possible, but unlikely given Eisen’s scientific record.

You literally asked Jonathan Eisen in this thread if he is a microbiologist.

This is really interesting to me.

I don’t make statements by asking questions. If you do, please, don’t assume we all express disrespect by asking things like ‘are you a microbiologist’ when maybe, just maybe, I didn’t know that, and asked. Like you do when you don’t know something?? Sheesh.

I’m also fairly certain Mr Eisen is big enough to state if he feels disrespected by such a question, himself.

But yes, I did ask someone I did not know was a microbiologist:

She is a microbiologist. Are you?

the answer he didn’t give me rather makes the last part of this thing I also said not so accurate an assumption:

But now that i have an answer to my direct question, I can modify my assumptions.

I’m going to assume she knows more than nothing, and more than me, and maybe more than you too.

to Mr Eisen. Thank you for drawing my attention to my false assumption.

Eat rye bread, brown rice and lentils for a month.

See if you feel any different.

Sure, he’s a well-respected micro biologist. Do we know that the person posting as @Jonathan_Eisen is the real one, however? After all, on the internets no one knows you’re a puppers.

Sure, he’s a well-respected micro biologist.

And not a terribly respectful one, if that is him, but academia has it’s privileges it seems.

I’m glad the conversation turned to how to properly respect authority and speak to your betters. We need more of that around here. /s

I’m trying not to break the conversation while clearing out posts that are nothing but personally directed missives. If you are not discussing the poop doping or something related to it, AND instead are discussing HOW to discuss things on the BBS, please stop yourself.

It’s nice to have an educated viewpoint here on BB, from someone with an interest in the field. We had that a lot in the old days, but it seems to have petered out.

I do though know a lot of scientists, published, practicing, theoretical, practical. We’ve all had long conversations and entertaining evenings understanding eachothers’ fields, and how science and real life collide.

So your opener “this is a bogus story” - that immediately - but instantly - shot through your credibility.

I am a non-believer in God, but we all know that it is impossible to prove that God does not exist. I cannot say that “God is bogus”, and still count myself as correct, as having integrity, and presenting myself to the world in a balanced, useful and meaningful way.

The term “bogus” is linguistic shorthand for an assortment of ailments and ills that trouble the writer. It’s also lazy slang, and always has been, and has always been recognised as such.

Your blogpost is casual and laced with sarcasm and clear disrespect for any potential in the story. It may be that you are outraged, that you take umbrage at the entire narrative - but you are a scientist, perhaps a respected scientist, and potentially I could come to respect you too.

Phrases like “they should do it with their eyes as wide open as their other parts” are imbued with suggestive overtones and constrained by puritan-like language control. You’re looking for the soundbite, but it isn’t quite coming off. It erodes your credibility.

And you’re flogging t-shirts. No problem really, but it doesn’t look very serious. I know scientists are not wealthy, for the most part. But your blog and the ads - it’s undermining the potential seriousness of your points.

I’m far from saying you should come across like a stilted 19th century scientist. But you read like a scientist in a Peter Benchley novel - to me.

I’d love you to write a more nuanced piece on this. Here, below, your article and presence has set the monkeys off shouting. Much, it appears, like the Twitter row you caused.

Your post here on BB doesn’t directly challenge the commentary in the publisher’s article. It just says “this is a bogus story”. I find that inadequate, and again, undermining of any professionalism potentially inherent in your analysis of the overall story.

Additionally, your blog post doesn’t seem to challenge or discuss the concept that certain gut flora might enhance athletic performance - surely that’s the most interesting aspect here, in terms of human performance? Is it possible, or not, and if so, or not, why? I’d love to read that. I’d love to know.

I don’t disagree with the one clear statement I gather - that this procedure is potentially dangerous. I can’t imagine that injecting oneself with diluted shit is risk-free.

Given how little about I know about the field, I had to look the guy up. Seems like he’s won some awards for his work and edits a journal in his field:

Jonathan Andrew Eisen (born August 31, 1968) is an American evolutionary biologist, currently working at University of California, Davis. His academic research is in the fields of evolutionary biology, genomics and microbiology and he is the academic editor-in-chief of the open access journal PLOS Biology. Eisen completed his undergraduate studies at Harvard College in 1990, earning an AB degree in biology. He graduated as a Doctor of Philosophy from Stanford University in 1998 with a thesis on...

As I’m not in the field, I have no idea what others think of the guy.

But it says nothing about whether the person posting here is the same guy. He hasn’t said either way, frankly, so who knows.

but academia has it’s privileges it seems.

Don’t worry, academia is being brought down for it’s sins. Us tiresome humanities folks will be first up against the way when the revolution comes.

I respect his opinions, but the behavior is pretty abominable, if that was him.

Whoever it was just showed up, called the OP BS and seems to have disappeared. Anyone could have done that, of course. I do think it’s kind of weird that people just accepted that it might have been him, just because they agreed with his POV on the issue.

I do think it’s kind of weird that people just accepted that it might have been him, just because they agreed with his POV on the issue. 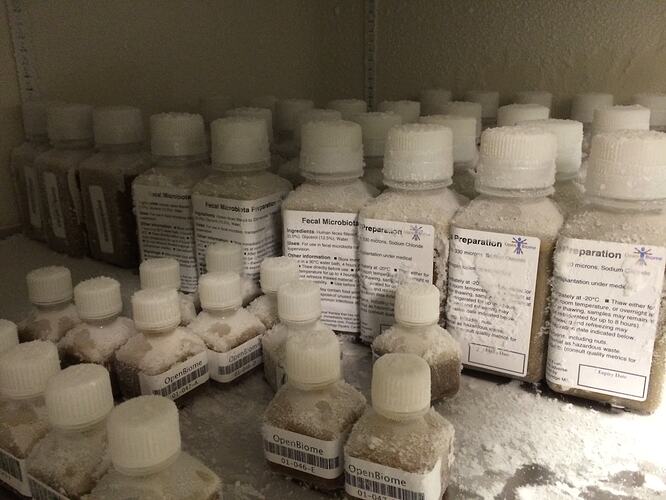 Here’s what it takes to be the perfect poop donor

This guy is saving lives with his poop, and maybe you can, too.

However, as I re-read the post I do not think anything I wrote endorses her “work” and luckily internet forums have previously exposed many of us to folks “angry for their own-sake.”

I think the post, and the subsequent discussion worthwhile. I’d prefer there was less anger, but it seems poop threads are full of it.

Your blogpost is casual and laced with sarcasm and clear disrespect for any potential in the story. It may be that you are outraged, that you take umbrage at the entire narrative - but you are a scientist, perhaps a respected scientist, and potentially I could come to respect you too.

Deadspin recycled a WashPost story, which in turn churnalised a story at ‘Bicycling Magzine’, as if to illustrate the workings of the clickbait infotainment economy and the churnalism of lazy journamalists. The style is dumbed-down hyperbole informal & colloquial. The response at the Phylogenomics blog is also colloquial in tone. In this context I can’t see anything wrong with sarcasm and disrespect. Would you really expect the register of academic neutrality?

When Dr Petersen publishes her findings in some scholarly forum, Prof Eisen (and other interested bystanders) will be able to provide post-publication commentary in the appropriate scholarly style.

Ah. Maybe it was indeed him, then? Of course, if he has lots of twitter followers, it could have been one of his fanboys, too. Again, internet, doggo, nobody knows, etc.

I suppose some people assume that talking about something or posting it implies agreement? Indeed, I didn’t see anything in your post that was necessarily an endorsement of her work.

I think the post, and the subsequent discussion worthwhile.

I’d prefer there was less anger, but it seems poop threads are full of it.

Maybe it is our poop and we need a transplant.

Would you really expect the register of academic neutrality?

It’s nice to see unthinking loyalty - I’ve really only read about that in stories like Robin Hood.

Were I to type a response to someone on formal headed paper, I would certainly be very keen to avoid embarrassing myself in front of a capable audience with sloppy writing and indistinct thinking. An incapable audience, of course, would not notice anything amiss.

Coming from a scientist, yes absolutely - I expect the register of academic neutrality. More so when said scientist bespeaks of their own credentials in no uncertain terms.

You don’t combat lazy journalism with laziness and slop. It doesn’t work well. It comes across like this Eisen character has had one too many and become verbose.

There is always something wrong with sarcasm and disrespect. The one is sarcastic, and the other, disrespectful. I invite you to provide me some stories where those two enemies of reason and progress have produced positive outcomes.