Here are my two official book shelves. Behind some of the shelves are even more books (they are pretty deep), so the paper backs I am keeping are hidden. Since I went through and encased nearly every book that has a dust jacket into a protector, I went ahead and cleaned up the organization some. 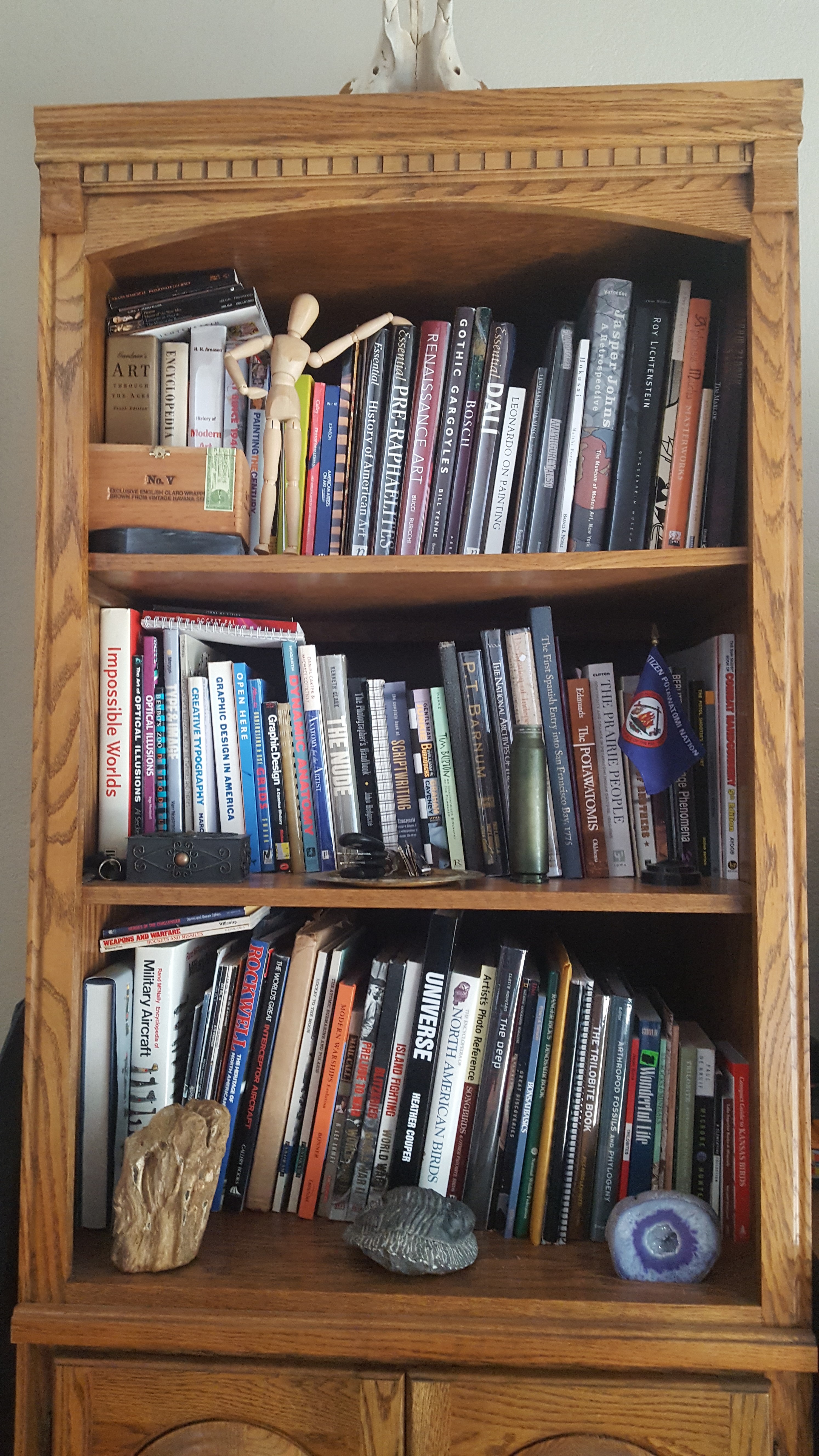 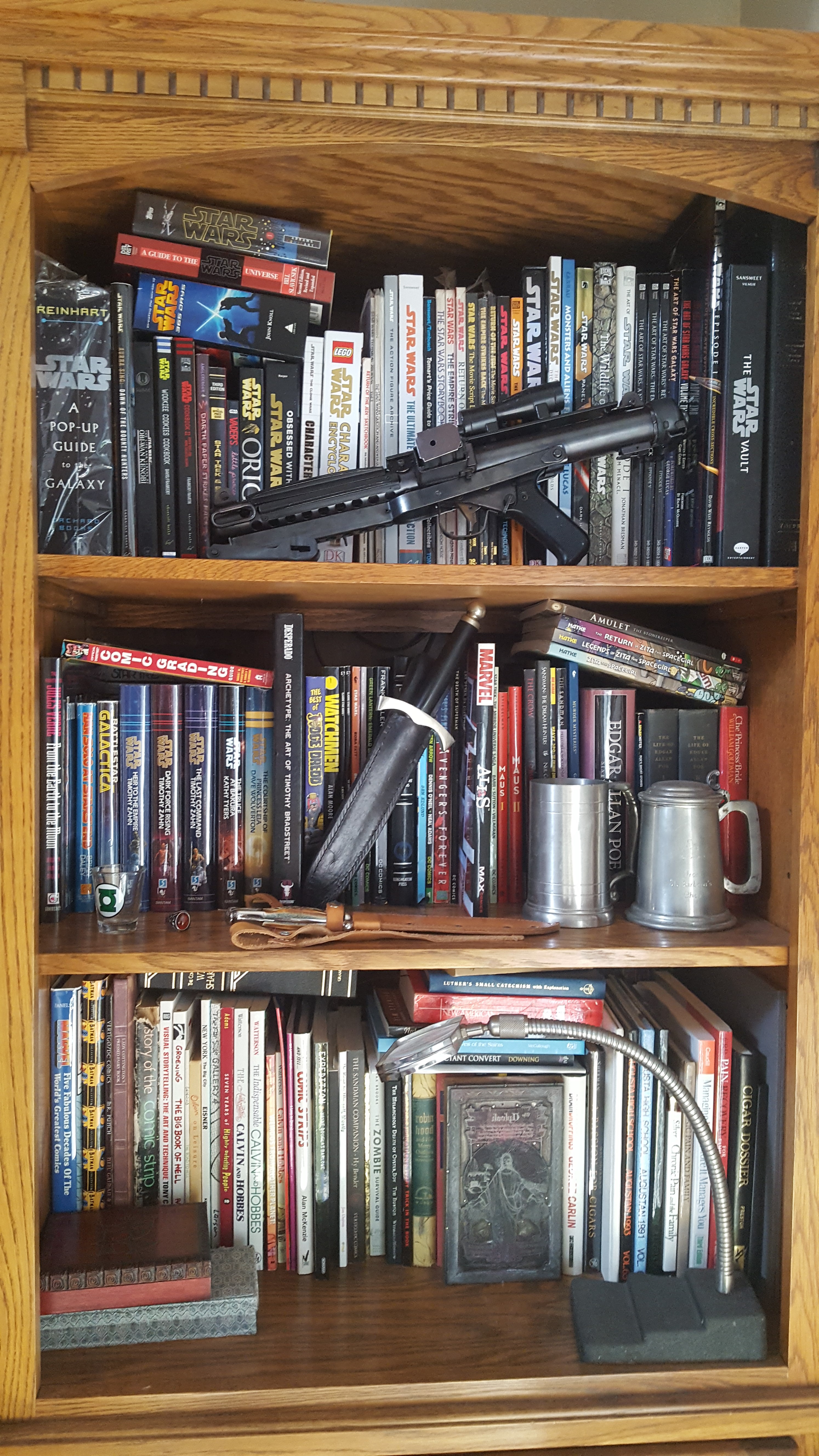 11 Likes
The rise in home videoconferencing lets us browse more people's bookshelves
Since most used bookstores are closed, why not just browse your own bookshelves?
Books sold by the linear foot
nimelennar July 23, 2016, 3:51pm #2

All right, let’s start at the top.

Top two shelves on the right are music.
Bottom two shelves are music.
The middle shelf is non-music binders and anything else that doesn’t fit anywhere else on my shelves.

Also, not mine, but after seeing this…

Good god, I want to have this woman’s babies.

I have most of my paper backs hidden. I have a lot of Star Wars and TSR books that I never got around to reading. Actually boxed some out to send to a friend to read. Gotta just get down there now.

Is that Terry Brooks Sword of Truth series?

If so, fun fact, the guy who made that dagger in the black sheath on my shelf made the Sword of Truth for Terry Brooks, commissioned by his brother.

Is that Terry Brooks Sword of Truth series?

Yes. I need to get rid of that.

Not because it’s long and preachy (although it is).

Not because the ideas of Objectivism are highly offensive to me (although they are).

No, I need to get rid of it because, having written an ending to it, explaining exactly what the Sword of Truth was and why it was created, Terry Goodkind then wrote a bunch more books, and now says that “The true purpose behind the creation of the Sword of Truth will now be revealed!”

No. Just, no. You do not give your readers an ending and then tell them, years later, that that ending was bogus (though the ending of Confessor effectively does that to Wizard’s First Rule, so I shouldn’t have been surprised by this).

ETA: that dagger does sound awesome, though.

I have never read the series, just aware of it. I think my ex-wife did.

The dagger is the pattern welded steel. Blending and folding two types. I need to polish it again, maybe sharpen it, and put some Ren Wax on it. Maybe make a new sheath.

I got tired of feeding the silver fish.

Seriously though, most books I’ve saved over the years were so I could share a passage or idea with someone. I finally shared the books and passed along 80%of what I had to good homes.

This plus a few scattered bookcases throughout the house that I am not cleaning up just to take a picture.

Mostly electronic with a few scattered notepads and sketchbooks.

This is 1/4 of the collection. Still working on bookcases for the rest.

Also, are the shelves crooked, or you just have one leg shorter than the other when you took the pic?

This is 1/4 of the collection.

Yours looks most like something you would see in home magazine so far. We both have Maus and Watchmen, though you copy is nicer.

You do have a lot of hard backs, so if you ever want to wrap up the dust jacket, this is the kit I got. You can get just a roll of the stuff too. But this site has all kinds of neat things if you are into keeping stuff nice.

Why, actually, yes one leg is shorter than the other. And I forgot to buy an awesome tripod mount for my phone.

Cool.
I’ve not done a ton of the Mylar covering. Maybe I should.
The only graphic stuff up there is the hardback or hugely oversized- so the Watchmen edition of the art proofs, the hardback Maus, the copy of From Hell… All the trade paperbacks are still packed up.
There’s the bulk of my Gibson collection- most of which is autographed. Just found another autographed Spook Country the other day.
The pride and joy up there is a copy of the Hunter S. Thompson book “Gonzo” that came out a few years ago. It’s the large cardboard box on the lower right. It’s a thing of beauty. I have two smaller editions of it, but the large one is the special copy.

The pride and joy up there is a copy of the Hunter S. Thompson book “Gonzo” that came out a few years ago. It’s the large cardboard box on the lower right. I

Neat. I have 2 Star Wars books that came boxed. One thats a bounty hunter, and one that is an INSANELY well made book. I mean, it is by far the nicest physical book I have. In the early 90s Topps released the first new set of Star Wars cards in years called Star Wars Galaxy. You could buy a soft cover book that had all the art work for $20.

OR you could be a dumb ass like me, and buy the $150 book. This one came in one of those boxes like you see in a library for a rare book. It was canvas on the out side, leather binding, and an exclusive card mounted on it. The interior is satin. The book itself is leather bound, with hand marbled paper and embossed. The pages in side are identical as the other book, except the first page is signed and numbered by Ralph McQuarrie, and it has a few dozen other artists signed on the first few pages. Then through the years if I see someone who has art in the book, I have them sign their page. I have maybe 20 signatures on top of the ones that came with it. Oh and a satin ribbon book mark.

Also - fun book fact - I got to see close up a first edition of Copernicus’s book where he outlines his theory the earth moves around the sun.

My “bookshelves” at the moment:

Living in someone else’s house sucks.

I’ve decimated my book collection (sometimes literally around 10%, sometimes a little less) a few times over the past ten years or so. Currently in the process again. I used to consider this a heretic act but years ago a then-current partner convinced me that your book collection should be functional, not a trophy display. Today, most of my books are references, whether explicitly (e.g. woodworking manuals, cookbooks) or for my own purposes (artwork books, artist biographies). For everything else, there’s the public library.

ETA: I used to have my books centralized but now I prefer what I suppose could be called ‘embedded organization’. Cookbooks in the kitchen, art books in the studio, woodworking books near the workbench, writing books at the writing desk, etc. So now the default bookshelves contain mostly stuff like science, math, philosophy, and other miscellaneous non-fiction.

This is a picture of most of my books. I have some more behind my bed, but not much more unless you count my Kindle. The bottom shelves have a tendency to go haywire before long, Mainly because of its proximity to the WUG (World’s Ugliest Green couch). Hence the hand sanitizer and cat brush hanging out on one of the shelves. I have a tendency to do “opposition research” so there are things like Mehmet Oz’s book and at least one antisemitic screed. (I never pay retail for these and am content to pick them up used. I don’t encourage the bastards.)

But, if we’re asking about the books I have access to, then I have some pictures of the good Doctor’s library. His work is mainly in Indo-European folklore and language studies. No scientific or tech manuals, but lots of classic sci-fi I don’t get enough time to read.

I have some more behind my bed,

Oh, we don’t want to see those

Who is the good doctor? He seems organized. His origami swans need their wings folded down, though.

I guess my origami books are in another drawer.

I am so overdue in getting around to reading Ghost Wars. Thanks for the serendipitous reminder!

Holy cow, that’s some library! It’s pretty great that you have access.