Preonic keyboard puts the keys on a grid

Yes, the keycaps are very nice.
But I’d rather battle with the rubber erasers on a Sinclair than use this.

(If you’re wondering, these are for people who hate typing fast.)

I’m assuming that’s a joke. But seriously, what is the supposed advantage? Is it supposed to be more ergonomic? Faster once the learning curve is tackled?

Nope nope nope. Of the things I miss about my Commodore 64, a keyboard without any navigation keys on it isn’t even on the list at all.

If all you want is an uncomfortable grid on a mechanical keyboard, you can get a Cherry POS rows and columns keyboard for $30 on amazon. https://www.amazon.com/Cherry-G86-63401EUADAA-Black-Keyboard-T50787/dp/B00NLVFEAG/

There is no doubt a tremendous untapped market for those willing to completely forgo such plebeian qualities as ergonomics or typing speed in the name of aesthetics. (“Type, on my keyboard? Oh heavens no, I have people for that sort of thing.”)

You joke, but there is a market for stuff like this. People like using beautiful things and for some of those people, they can type fast enough on it.

People like using beautiful things small keyboards for small spaces and for some of those people, they can type fast enough on it.

Sorry, it’s not beautiful, that’s the best I could come up with.

I think it looks pretty great in that photo.

So I actually have the smaller Planck version. I built it from a kit. 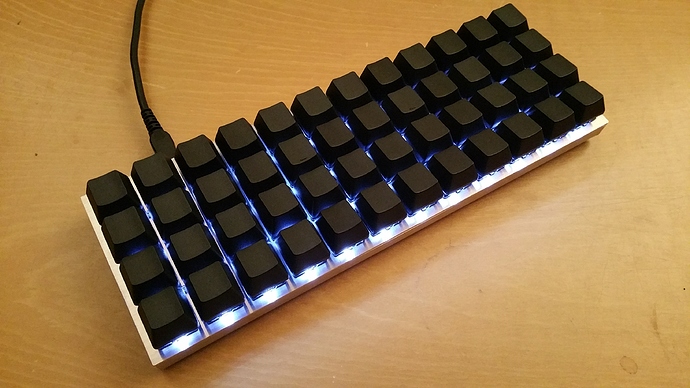 The thing is the staggered key layout of standard keyboards isn’t actually ergonomic. It actually stems from typewriters and the need for the levers to not interfere with each other. The straight grid layout is considered by some to be more ergnomic. The real ergonomic benefit of the Planck keyboard is reducing how far your fingers reach up from the home row.

The other main appeal is portability. It’s a full mechanical keyboard, but small enough to easily travel with. My main daily driver keyboard is actually an Ergodox. Which is an even weirder kit keyboard.

This sort of thing isn’t for everyone. Trying new and unusal input devices for my computers is something of a minor hobby, I’ve just adopted the ones I really like into my daily use.

For what it’s worth I think the default layout of the Planck is shit. I have my number row on my home row. I can fit all the keys of a standard keyboard with only two layers rather than the three or more layers most people with these use. If we’re reinventing the keyboard it makes sense to reconsider normal conventions not try to shoehorn them in with less keys.

Background: I kinda went down the rabbit hole of mechanical and ergonomic keyboards a few years ago. Before doing so I was a shitty typist. I switched to Dvorak and taught myself to touch type at the same time.

Ortholinear keyboards (as opposed to staggered ones) in general attempt to line-up more with the natural direction of your fingers - there’s no natural “stagger” to how your fingers move. I try to stay away from ergonomic claims, because there’s a lot of actual science that needs to be done before we’ll have anything conclusive, but people have claimed these layouts to be more comfortable, or at least make more sense

I can’t speak much to speed (was average before and after), but as someone that’s used a Planck daily for the past three years, I’ve found it easier to touch type (I learned when I switched), and I definitely move my fingers less!

Oh WOW $130 AND you have to solder the switches on yourself AND it’s in an uncomfortable wrist destroying layout. SIGN ME UP! /s

In all seriousness, if this is something you want and enjoy please by all means enthusiastically share, because while I find ‘plank’ keyboards beyond unergonomic and fairly ‘nerd fashion for its own sake’ it does have more people building keyboards, which puts more resources out there for people like me who don’t have the skillset but ‘oh hey I might want to do a thing that needs a custom keypad.’

Edit: Also this puts into wider knowledge where and how to get keycaps that replicate a vintage look. Since I really do like the look of ye olden keys.

Yeah; I think I might have to own one of those(assuming that the featureless keycaps and intended POS use imply remap capability).

For typing, there are good reasons why you don’t put keys in basic grids. For awesome control panels, though, bug grids of special-purpose keys are basically mandatory; and those ones are bad, basic, matte black.

In any proper data fortress, every surface at an angle other than 0 and 90 degrees is loaded with such keys, and toggle switches, and assorted indicators. It’s just the rules.

And why shouldn’t that particular, bizarre sub-group finally get something nice for a change?

Get too specific… and “darling” can end up becoming a footnote in the bankruptcy paperwork.