Explosive BMs is the name of my alt-punk Mannheim Steamroller tribute band.

I don’t need no stinking parasite, raw vegetables have made me sick from childhood on.

Just keep crying over the robot Illinois Vegetable Mise machine over there, no need for details. Actually it would be great if you’d certify that orchids don’t make you want to use automated weaponry, though. Maybe that walking around trees doesn’t make you need to scream loud and long, much? Unless you’re in the NZ band Explosive BMs.

Cooking the vegetables can kill the parasite, but if you wanted cooked vegetables, you wouldn’t have bought the raw vegetable platter. I say, bring it to a party and watch the fun!

Serves you right for eating vegetables.

There are no recalls on cupcakes. My new dietary staple.

I hate to bring it up guys, but you americans have pretty weak stomachs. Can’t even drink the mexican water!

As someone that works in Food Safety, it’s been awesome watching as vegetables keep taking out more and more people. I’ve lost track of the number of times we’ve had states-wide, or eu-wide recalls of fresh vegetables or fruit because people don’t treat them as dangerous.

Will we eventually learn to treat all food as potentially dangerous? Or will it kill us first…

Well, in the eyes of the law, and on Internet forums, it seems like only sterile corporate laboratory food is safe, and traditionally produced food must be eliminated.

But in my experience and observation, if you can survive eating raw eggs and drinking raw milk and that sort of thing, when everyone else comes down with food poisoning you’ll just burp and be OK. Humans did not evolve to live in a sterile environment. So I tend to prefer the “ugly organic” sort of food I grow in my garden, which has random microbes all over it. This year the peas are delicious!

I’m not sure where you’re going with this.
Are you saying the many, many, many outbreaks of pathological bacteria are not real? Or not in veges and fruit?

I mean, these things happen. That’s science. It’s not really debatable.
That we’ve been eating fresh veg and fruit and ever doesn’t mean bacteria haven’t been evolving along side us, does it. Human’s didn’t evolve to survive repeatedly eating listeria soaked lettuce leaves just as much as they didn’t evolve to live in a sterile environment. It’s just that now we can actually work out what’s wrong when people all get sick.

Also, heck no lab food isn’t necessarily safe and I didn’t assert that at all. It doesn’t take much for bacteria to take hold, and getting rid of them out of your food creation system can be an absolute pain in the ass.

As someone that works in Food Safety, it’s been awesome watching as vegetables keep taking out more and more people.

And so it begins. 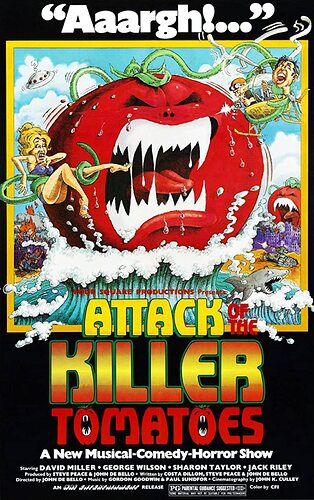 Attack of the Killer Tomatoes!: Directed by John De Bello. With David Miller, George Wilson, Sharon Taylor, J. Stephen Peace. A group of scientists band together to save the world from mutated killer tomatoes.

I know, I know…
(Pre-emtive pedantry.)

Unfortunately, the tendency to distrust anything short of sterility makes rather more sense in the mass production context.

Not everything uses a hamburger style “homogenize the pathogens!” step; but steps that can turn a limited contamination incident into a zillion units of contaminated product are common enough; and the process is deeply opaque to the end buyer.

Treating produce from the back garden like it has been processed in substantial bulk, from multiple sources, by multiple low bidders; is pretty dubious. But when that particular situation is how the supply chain went? Less so.

I’m not sure where you’re going with this.

I don’t think my views on food safety are coherent and consistent enough to fit neatly in to a forum post. Certainly my fault, not anyone else’s.

But that being said, I think building cities in places where food has to be trucked in from MegaCorp® Science Farms™ (or worse yet converting arable land into high density habitation) is less conducive to human health and happiness than accommodating a vegetable garden for every family, and encouraging families that don’t want the proven health benefits of grubbing about in the dirt to rent their tracts to adjoining neighbors.

I think both the modern American city and the factory farm are unsustainable assaults on human health; polluted, pathological metastases of perfectly understandable desires for increased wealth and efficiency.