Religious scholar Reza Aslan on Fox, being "interviewed" on his book about the historical Jesus 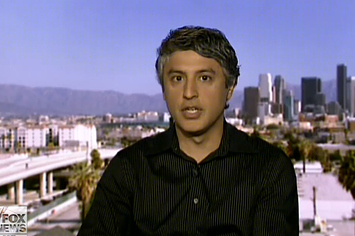 Is This The Most Embarrassing Interview Fox News Has Ever Done?

Reza Aslan, a religious scholar with a Ph.D. in the sociology of religions from the University of California and author of the new book Zealot: The Life and Times of Jesus of Nazareth, went

this is just sad. this anchor went to modeling school, and Sunday school, but not journalism school. which I guess is most anchors these days, but you’d think their experience of being on tv everyday would clue them into when they’re out of their depth enough to avoid embarrassing themselves like this.

Actually, she went to grad school at Northwestern - not exactly an easy school to get into… I know that we are culturally trained to believe that pretty women are dumb as stumps, but women who used to enter pageants tended to be quite smart, and they went into pageants because it got them good scholarships, as most academic scholarships were awarded to men. I think we should focus on the ideological slant of fox here, not the gender of the host.

huh. I jumped some serious conclusions about her education. When I saw her being as dumb as a stump, I inferred that she was hired by fox to look pretty and read cue cards. I guessed her background was modeling because it is a talent pool that networks could draw upon toward that end. Though, in light of what you explained about pageantry scholarships, that was unfair of me to say. I condescended her, but I equated her with a dumb Ron Burgundy type because she was being dumb, not because she was a woman.

My assholish-ness aside, I’m still shocked that she’s a qualified journalist. I’ve never seen her before this clip, though. Her voice was warbling quite a bit the second or third time she questioned how a Muslim could write a book on Jesus without an ulterior motive, so I guess she’s just super churchy? Or possibly the waver in her voice was due to fox forcing her to repeatedly ask Aslan the same dumb questions and she was embarrassed by how dumb it made her look?

My TLDW (too long don’t watch)

But your a Muslim

I have a Ph.D. and 20 years of experience in this subject

20 years of experience as a Muslim

A Ph.D. as a Muslim go write about Muhammad

The thing about the Fox talking heads is that though they shout and scream about Ivy League educated elites, they are themselves often Ivy League educated elites. The lady who does the morning show on Fox was a pageant alum and she’s actually smart and well educated, too. But they are in a culture that doesn’t value that in women, at least not as much as their legs. They are socially subordinate to their male counterparts, generally speaking. Plus, they want to feed their audiences fear and anger of elites.

I think the warbling is indeed because she was bright enough to realize how dumb the question was, but she has to follow her script. I mean, have you ever called like AT&T tech support and try to get them to go off script? It’s not because they are dumb, it’s cause they’ll lose their job if they deviate, most likely. She knew the question was BS. She knew that she should be asking him substantive questions on his book, but that’s not what fox viewers want, so they get this tripe instead.