Relive the trauma of learning to drive with this video

He just needs the right teacher…

Wow. Believe it or not, these two were better teachers than my dad and he was a cop trained in all manner of driving technique. I’m really glad I took a motorcycle safety course in my 20’s that taught a procedural method for driving; start with the clutch friction, move slowly up to engaging the gears, practice engaging and letting out the clutch repeatedly while driving straight and cornering. Basically, there is no sense in even making the car move until you’re fully comfortable with the clutch and throttle mechanisms. I’m going to kill it when I teach my kids to drive! probably…

My beloved father was an awful and impatient driving teacher, and that was with automatic. To give you an idea, he approached the whole exercise with the expectation that driving should be intuitive to anyone.

My nerves are still shot, years after teaching three kids to drive.
I finally felt safe in the car with my daughter the day a car came straight at us on a back road, and she reacted to save us before I could say a word.

When i was learning to drive my dad wanted to be the one to teach me. It ended up with me parking the car and walking home because i couldn’t stand him yelling at me.

If i ever have kids i’m definitely paying to have them take a driving course, because i’m sure as hell not doing it. There are professionals for this

Also driverless cars need to be a thing already.

Here’s the main problem I see, the damn steering wheel is on the wrong side of the car!

I loved my dad, but he was not a patient man when it was time to teach me to drive a car. It didn’t help that he started me out on one of the busiest streets in town, and with a manual transmission Subaru Brat.

I was fortunate to have a pasture behind our house and taught myself to drive…automatic and manual. And was illegally driving on nearby roads at 14. (It was out in the country and not that unusual actually. Hurrah for growing up in the sticks, I guess.) 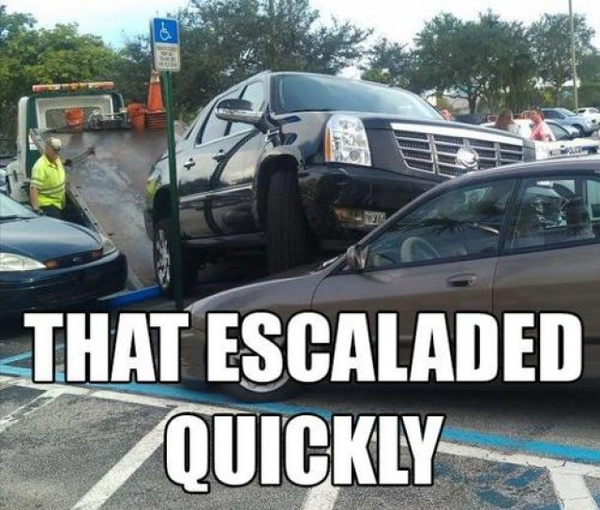 I was terrible at shifting in my teens. I finally got a VW at 22 and learned to shift with it. Compared to an old VW, most shifting these days is a breeze. Kind of like the switch from a manual typewriter to a desktop computer with a nice keyboard.

That was me. My father didn’t want to spend the money, but my mother wanted to preserve whatever family harmony was possible with a 16 year old. It was worth the money, 100%.

The driving instructor was about 400 years old (approximately) and probably wouldn’t have flinched if someone fired a gun next to his head. He was SOOOOOoooo calm, no matter what.

I took my beginner’s test, of course had to navigate morning rush hour traffic, did well enough.
Got some papers stamped and I thought I passed, and had been given my learner’s permit.

After a year of incident-free driving, I went in and proudly told the clerk I’m here for my FULL license, thank you very much!

Clerk looks at my papers, says I need to have a valid beginner’s first. Seems I failed the first test and just didn’t read the paper work very well. A full year of driving without a valid permit of any kind.

So I re-applied for a beginner’s , took the test again (by this time I had mastered the parallel parking that screwed me the first time)… passed 100%.

Another year of restricted driving came and went, got the full license and knock on wood 30 years so far so good, two parking tickets and that is it.

And if you get nervous around a ‘Driving School’ vehicle… damn rights you should be.

I was with my daughter while she was learning to drive at the speed limit in our neighborhood. Someone cuts her off, and yells
‘Learn to Drive!!’

That’s one reason why I like the law that various countries have that people learning to drive have to display some sort of sign on their car.

My son has his learners permit now so my wife and I are his instructors. He has no choice but to learn from his parents because he has to log 120 hours on L plates before going to a probationary license. It would cost a fortune to do that with an instructor.

And yeah its pretty stressful. I started him on a car with a manual transmission. Probably a mistake because he needed to learn driving before shifting and there is more to driving a manual than I had given thought to.

We have had a few drivers lose it at him at intersections. He talks his time and with L plates on that should be fine. There are idiots all over the place unfortunately.

So we have him driving my wife’s Jetta at the moment. After the first ten hours I felt that he was about 60% of the way there. Maybe at 50 I would consider him a fairly safe driver.

My kids have had their licenses for several years. I got rid of my automatic and now have a 5-speed and a pickup truck. One kid responded by buying her own car. The other wanted to learn a clutch, so I gave her one lesson and the keys and said good luck… I don’t have to be with you this time around.