These assholes are telling on each other for book sales… so fucking tedious.

“I came to believe Gosar and Gohmert may have had serious cognitive issues.”

And naturally, being a principled patriot concerned with the welfare of your country more than that of your party, you alerted people, discussed it publicly, and worked to see that they did not return to office.

And certainly you took no money from the House Freedom Fund, to which Gosar is a contributor.

Also, what a pinhead: 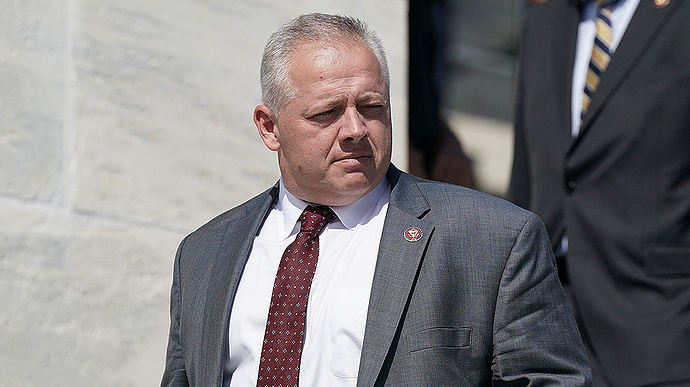 Riggleman: After I criticized Trump, my mom texted me, ‘I’m sorry you were...

Denver Riggleman, a former GOP lawmaker from Virginia and House Jan. 6 committee aide, wrote in his forthcoming book that his mom texted him saying she was “sorry you were ever elected” after the t…

“What will it take to wake you up son….I love you so, but cannot stand by and listen to your elitist attitude and being praised by elitist journalist and democrats,” Riggleman’s mother texted him.

Congratulations, she said. “You are now part of the swamp…I’m sorry you were ever elected…You are officially a politician…I have cried over you and my heart is broken by you.”

As if this was about Trump:

“My relationship with my mom made it through my break with her Mormon Church,” Riggleman wrote in his book. “I wasn’t sure if it could survive the Church of Trump.”

There ya go. As @Mindysan33 alluded, it’s really tiring, this emerging genre of “now that I’m out, let me tell you how much I really hated doing all the awful things that I was more than happy to do at the time, just to stay in power” books.

this emerging genre of “now that I’m out, let me tell you how much I really hated doing all the awful things that I was more than happy to do at the time, just to stay in power” books.

They are really telling all of us who they are by their actions, aren’t they. A bunch of grifters with no moral center.

There would be a humorous pathos to it, if it didn’t involve fscking people over and ruining lives.

Riggleman wasn’t sure what to make of these face-eating leopards. He saw the leopards. He saw the eaten faces. But, he still just couldn’t figure out what was happening. He went on a sabbatical. He spent months in quiet solitude at a retreat. Suddenly, as dawn broke, breathing the crisp mountain air, he had a moment of clarity, and it came to him. Yes, of course! How hadn’t he seen it before? It was the face-eating leopards-- they were eating all the faces! Now, he must race to alert the public! He will publish all he knows. Well, first, he will race to a literary agent, then s/he will race to a publisher who will race back with an offer, then he will race back with a counter-offer… but eventually he will indeed race to write 200 (padded to 300) pages, that is then massaged by his editor to a respectable 400 pages. Then race to find some random photos of himself consorting with (between-meals) face-eating leopards to support his face-eating-leopards-eating-faces thesis. Then, he will race to various Sunday morning talk shows. Yes, he will get the word out, eventually. Hopefully as soon as the publisher races to him with his advance (he’s late).

“If you want a picture of the future, imagine a leopard eating a human face – for ever.”

Golly gee, this is new information indeed. It’s not like anyone, especially on this site, was aware of it years ago. /s

The feigned ignorance of these fascists and their enablers is only fooling people as stupid as Gohmert himself.

He just realized that all history will ever remember about him was his silence during all this. This book will prevent his grandchildren from accepting the fact that he was a face-eating leopard when it was fashionable.

Man, that’s a chewy face… like a Willy Nelson or a Jack Palance.

It might make a difference if anyone were to read it besides Democrats.

“I came to believe Gosar and Gohmert may have had have serious cognitive issues and are Nazi F@cks from hell.”

They are literally just trying to save their own skins and reap a profit. It’s grifting all the way down. And I doubt any of the true believers would believe them even if they read these books anyways.