(A British MP who compared herself to Jesus after being sent to prison for lying about who was driving her car when it set off a speed camera).

Get down off the cross, you hateful old bigot. We need the wood.

That explains why he’s started referring to himself as “Steve King-of-Kings.”

it is disturbing that he would think and say this. but as is often the case with these I think the @beschizza mouths artwork is even more disturbing.

Loaves and fishes? That’s so 1st century - Little Stevie’s got the miracle of the cantaloupe calves.

Does Steve King know that Jesus was Jewish?

He does, but thinks he was “one of the good ones”.

A Republican playing the martyr, eh? Haven’t seen that sort of thing in, like, hours. 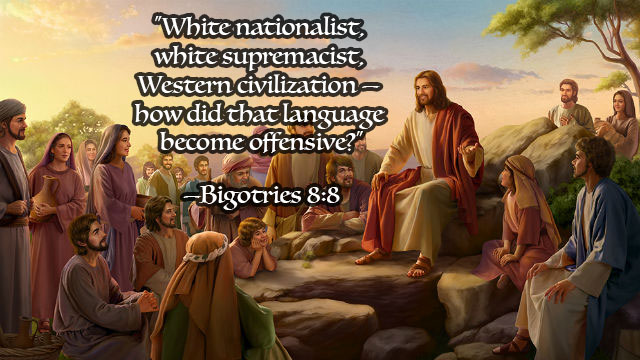 Christopher Matias points out that some outlets are falsely suggesting King was censured by congress; it did not go that far.

All the victimhood, none of the punishment.

Actually just keep the cross as is, nail an effigy of the hateful old bigot on it and set it on fire on that hateful old bigot’s yard, then maybe he’ll understand the other side of white supremacy…

Less disturbing than the real thing tho

Told to you by an atheist that is imagining a part of the bible that tells readers not to be Christ-like in nature.

And when Jesus came down from the cross he resold the lumber back to the Romans at a higher price thus destroying price controls while complaining about immigrants.

Told to you by an atheist that is imagining a part of the bible that tells readers not to be Christ-like in nature.

You’ll have to clarify here. Who’s the atheist in question? Which part of the Bible do you think he’s imagining? What aspect of being “Christ-like in nature” are you discussing?

Whatever aspect it is, I can’t imagine Steve King being Christ-like in any real way.

It still weirds me out that so many Americans think the GOP is the party of Jesus considering the oldest living Democratic President is literally a Deacon and Sunday School teacher, not to mention a carpenter who spends most of his time helping the poor. He even has the initials J.C. for crying out loud. If you were looking for an American politician who tried to walk in the path of Christ you couldn’t possibly ask for a better example.

But yeah, the thrice-married serial philanderer bully who never goes to church and says he never felt the need to ask God for forgiveness even though he embodies all seven deadly sins in human form is the real “Christian” President.

This is entirely tangential, but did you know the Saudis just crucified someone? Glad they’re on our side, amirite?