Retired major general of US Army: "Michael Flynn should be court-martialed for treason"

Originally published at: Retired major general of US Army: "Michael Flynn should be court-martialed for treason" | Boing Boing 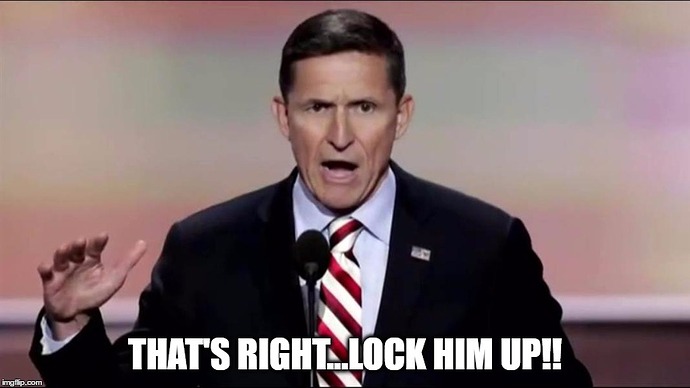 “Michael Flynn should be recalled to active duty and court-marshaled for treason.”

Still not treason. Treason is the one constitutionally defined crime and is almost never the right charge. Sedition or one of the conspiracy to commit X offenses is a better choice.

You don’t think trying to get a Myanmar-style coup going counts as levying war against the country?

I’ll allow it in this case. Eaton prefaced it a way that made it clear he thinks Flynn’s treachery is against the oath he took to defend the Constitution. I’m sure he understands that, in the happy event a court martial came to pass, the official charge would be sedition.

Frankly, he should be court martialled only for his mispronunciation of Myanmar.

You’ll hear a bunch of blustery talk like this, but I’ll bet you a dollar that nobody with any skin in the game (i.e. anybody with a net worth of over 7 figures that didn’t get that way from instagram) will see any negative repurcussions. He’ll keep doing appearances and probably speak at the RNC in a few years.

That candy-cane tie is a crime against humanity.

If the war happens, yes. Until then advocacy for such a thing is a different offense. The narrow definition of treason in the constitution is there because treason as a charge had a nasty way of spreading out to encompass more and more offenses.

So is the KKKpublican Party…

This bothered me too – “Minnamar” is what I hear. But I think it’s being said by a questioner in the audience, not by Flynn himself. Am I seeing/hearing correctly?

Frankly, he should be court martialled only for his mispronunciation of Myanmar.

And for screwing up the Pledge of Allegiance.

Nothing to see here. Move along…

Michael Flynn should be recalled to active duty and court-marshaled for treason.

I’m not fond of Michael Flynn, and an outcome that puts him in jail would be nice, but I’m not sure this would be a valid one.

If one recalls Michael Flynn to active service I’m utterly unconvinced that one should be able to hold him up to the standard of an active duty officer for actions made when not on duty. I mean as a civilian he isn’t required to salute anyone, nor follow orders from officers of superior rank. You can’t (or shouldn’t) be able to recall him to active service and then court martial him for that either (unless he continued to do it after being recalled).

If he’s riding on his service history and former rank to promote this seditious nonsense*, he can damn well be called back to that status and held to account for his actions. Especially since the U.S. government has a history of pulling people back into uniform when it suits their needs otherwise.

Senior officers like Eaton and Vindman don’t talk about this stuff frivolously. If they’re saying these things they’re dead serious about it.

[* which he is. The TV chyrons and speaking engagement advertisements don’t read “Mr. Michael Flynn, Civilian”.]

I’m utterly unconvinced that one should be able to hold him up to the standard of an active duty officer for actions made when not on duty.

there’s a line for sure, it’s just that he’s long ago crossed it.

he getting a minimum of 100k per year in military pension – and like @gracchus says – leveraging his position as a former lieutenant general to commit sedition ( not to mention, traded upon that reputation to commit crimes. )