It’s the thought that counts, Rudy.

I’m so glad that I live here in Canada, where you could in fact stick socialized medicine up one of your orifices, without worrying about how you would pay for the subsequent crushing medical bills.

You can always count on Rudy to show some class.

What? Am I supposed to be shocked? The Republicans are a deplorable party with no sense of decency or honor. That’s just who they are now.

I guess he hasn’t seen this …

…the US spends far more on health than any other country, yet the life expectancy of the American population is not longer but actually shorter than in other countries that spend far less.
https://ourworldindata.org/the-link-between-life-expectancy-and-health-spending-us-focus

He also told a crowd in Florida today that Hillary “lied” about being at Ground Zero after 9/11*, even though he was photographed standing right next to her. 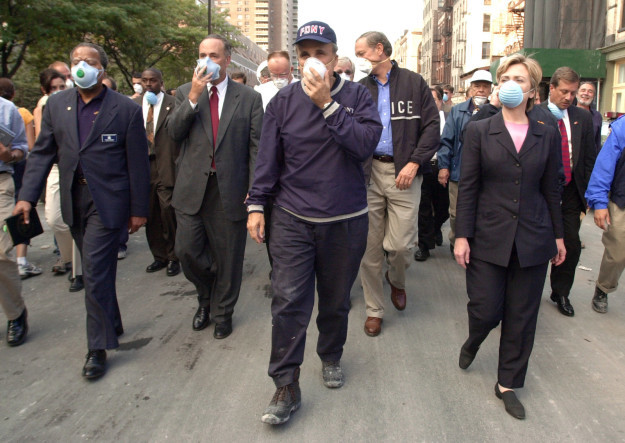 “… and when I say, ‘we’, I mean myself and all my rich friends, particularly my rich friends involved in the healthcare and health insurance sector, who are doing very nicely thank you under America’s current dysfunctional system. And when I say “socialized medicine”, I mean everything except Medicare, which many of our constituents somehow fail to recognize as a form of socialized medicine, and which we will need to cut back very very gradually if we don’t want them to wake up and freak the living fuck out.”

I don’t get why he has to say stuff like this. . . Trump already has the misogynistic asshole vote pretty much locked up, this kinda thing isn’t going to convince anyone in the center to say “hmmmm. . . good point, I guess I’ll vote Trump.”

Yeah, but this popcorn isn’t going to eat itself.

…goes back to watching the GOP implode…

The headline misrepresents what he said. It was actually less coherent.

I would transcribe it as:

I’m continually amazed that they see this as worthwhile political discourse being that it’s so completely tabloid-esque and juvenile, and to my mind, it only serves to reveal them as the sycophants they really are.

trump: "Okay, now tell them that ISIS will come to America if HRC wins because she’s their founding member, oh and also that Paul Ryan might have conspired with MLK to bring down the Washington Monument."
Various goons: “Ya, okay boss.”

He didn’t actually invoke the name of a Lovecraftian cosmic entity! He just suggested it!

I think the impressive thing is how he had a rally with no one on medicare or medicaid, you know socialized medicine…

He also told a crowd in Florida today that Hillary “lied” about being at Ground Zero after 9/11*, even though he was photographed standing right next to her.

You mean Photoshopped standing right next to her.

Oh, he doesn’t have to, he just wants to. The shackles are off, remember? #nofilter

I think the impressive thing is how he had a rally with no one on medicare or medicaid, you know socialized medicine…

Yeah, but as @angusm pointed out up thread, this is a group that has been really consistent in their failure to understand that. I’ll further add to that thought how much I enjoy going to the VA clinic and hearing other vets getting free healthcare paid for by the feds complain about the idea of socialized medicine. (OK, one could make the argument that they feel the description doesn’t apply because they don’t understand how privileged positions work they served in the military, but I just don’t really see a difference.)