America is broken. Take it back to the shop to get the nuts out.

Even if you don’t explicitly ask permission (and you might implicitly think you have it), whatever the situation, if she says no, or cannot say no, you very explicitly don’t have consent.

People get into all sorts of twists trying to make consent seem like the hardest thing in the world to obtain. It’s simple. Yes there are probably occasions where people can assume acts are solicited, but as soon as you remove the opportunity for consent, and you carry on, you’re on dangerous ground committing rape.

People get into all sorts of twists trying to make consent seem like the hardest thing in the world to obtain. It’s simple.

Maybe, but legally we have bound consent into all kinds of corners and things becomes all shades of gray. At the same time what half of everyone is talking about isn’t consent as far as I’m concerned, it’s respect. My wife and I respect each other and we rarely feel the need to verbally communicate our sexual feelings. The vast majority of that is done in non-verbal ways, but of course that’s all legal gray area stuff, because did she really consent when she didn’t stop my advances? For my wife and I it’s an irrelevant question because she knows I’m not going to do something she isn’t interested in, and she knows she has carte de blanche access to me (with my approval).

I’m left with the impression that consent is a boner-killer for Rush. Maybe he learned about sex from Ayn Rand, and can’t get going unless he feels like he’s “taking” what he’s “entitled to”.

Well said. Libby Anne at her Patheos blog, “Love, Joy and Feminism”, helped break down the reason that conservatives and progressives can’t even understand each other with regard to sexual ethics is because we are working with different definitions and world views to begin with. She uses the tale of two boxes to help explain why the two groups talk past each other and it gets to a little of what Rush Limbaugh isn’t quite getting as you say in your comment. 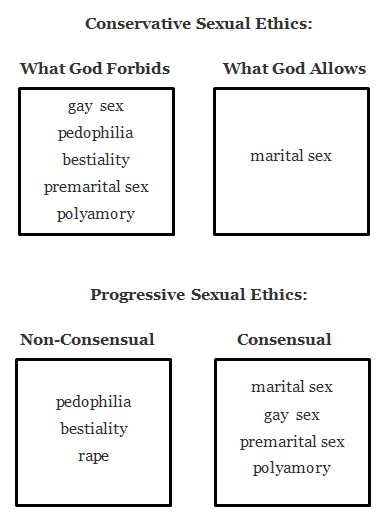 I also appreciate your statement on free consent and how important it is to understand the balance of power as well.

Your lengthier summary is exactly it, point for point.

Oh, but you stab ONE guy, and suddenly they’re calling the MURDER police!

I’m trying to think of a way this isn’t as horrible as it sounds. It’s a stretch, but all I can come up with is that he meant “Really perverted things aren’t ok just because people consent to it”. That’s not as bad – it’s none of his goddamn business what consenting adults decide to do with their bodies (with genital participation or not). BUT that is not what he said - or even came close to saying.

Meaningful consent can only occur when there isn’t a power imbalance.

Well to a very real degree, there is always some power imbalance. It can be as simple as one person makes more money, or is better looking or has something other than sex to bring to the relationship. So the question is how much of a power imbalance is enough to invalidate consent? And how explicit does that consent need to be? Two twenty-year olds who are staring into each others eyes at a party may not feel the need to grant explicit consent for a kiss. But a boss groping his adult secretary is on shaky ground even IF he has explicit consent.

Seems to me that even if they caught Limbaugh on tape as saying that he groped someone, he’d still be unsinkable. There’s just no stopping him, is there?

…Of course, people could, y’know, stop paying attention to him and turn a deaf ear to his ramblings rather than eagerly reporting on all the stupid things he says. So, yeah, no stopping him.

The other point of why consent is so damned important, is that he and those like him do not fathom how amazing an act can be between two (or more) people when consent is there. I am a monogamous person so I can only speak to something between two people, and in that the deep bond you can share when exploring each other’s desires, passions, fetishes, is absolutely amazing.

Exactly, and it’s rather marvelous, really. He’s completely damned himself by describing his opponents view with utter accuracy. How often does that happen? (Although I’d correct one thing - the “rape police” are generally known as just “the police.”)

I’m trying to think of a way this isn’t as horrible as it sounds.

Yeah, there isn’t. He’s stating his case - or rather his opponent’s case - with such clarity, it’s impossible to give him the benefit of the doubt. Which is lovely.

Thanks - I wanted to find the rest myself. Usually when Limbaugh is completely right about something, he manages to quickly fuck it up.

You know, when I woke up this morning, of all the possible futures I saw laid out before me, I did not expect to end up in the one wherein I was reading a fairly succinct and reasonably accurate description of my sexual moral beliefs prefaced by “Rush Limbaugh:”

that every person deserves the right to decide for themselves how to act.

You could say we believe in personal responsibility.

So the question is how much of a power imbalance is enough to invalidate consent?

I would think it would have to do with the “more powerful” party’s ability to impose long-lasting consequences onto the “less powerful” party if they don’t consent.

As to where the line should be drawn regarding what “consequences” for refusal would be enough to create coercion: I don’t think that’s a question easily answered.

And how explicit does that consent need to be?

I think that, if coercion is clearly absent, and if both parties have the ability to withdraw consent at any time, then implicit consent is probably enough. However, explicit “Yes means yes” consent is certainly much safer and less ambiguous for all involved, so if there’s any uncertainty (and it’s very difficult to get to zero uncertainty), then it’s always a good idea to get explicit positive consent before proceeding.

Before you have a heart attack, you may want to read the whole transcript, and see what he thinks of the idea of “anything is okay with consent.”

I prefer the version of reality wherein he has been blissfully silent all these years, only breaking his hermitry to speak that one paragraph, before retreating back into his hut in the mountains.

Willful suspension of disbelief is just about all I have these days.

Maybe he learned about sex from Ayn Rand 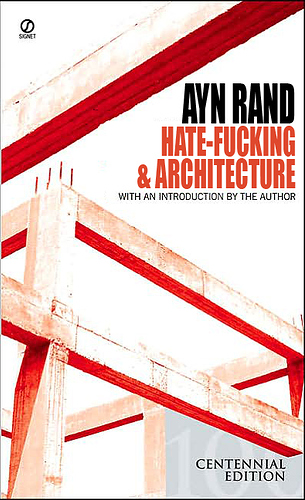