Putin is now firmly in the wunderwaffe phase of garbage military planning.

The Chinese company that actually makes the robot being passed off as “Russian” seems to be non-too-happy about this. 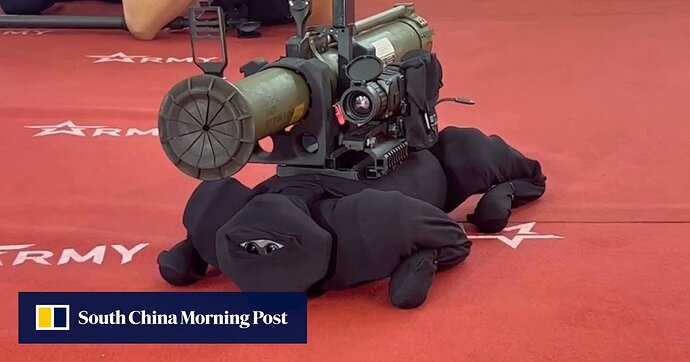 In response to a report that appeared to show the Go1 robotic dog with a mounted rocket launcher, Unitree Robotics said its products are only for civilian use. 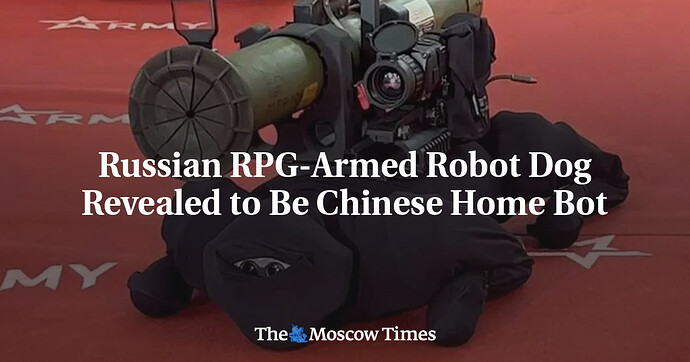 The robot dog's Russian developer hasn't commented on the apparent similarity with the Chinese-developed companion bot.

Yeah, that’s came out right when it went viral. Last night the company seems to have decided to “distance itself.” Crazy stuff.

Someone needs to make a movie about the missle-launcher robot dog becoming sentient and having to come to terms with it’s destructive nature and whether it’s creation is necessarily it’s destiny.

There’s no reason to think that the Chinese manufacturer co-operated with this project.

The Go1 sells for $2,700 on Unitree Robotics’ website and $420 on AliExpress, China’s top online marketplace.

I don’t think anyone has claimed they have. The early articles said “hey! Same robot.” Then the company “distanced itself.”

Or, at least, I haven’t seen anything implying they cooperated. It’s all been “look at the silly Russians, trying to pass off a cheap Chinese robot as advanced military technology.”

The fact that their ‘rocket’ corps are analogous to the US AirForce in terms of funding prioritization is funny to me. Basically, they’re just the branch that handles launching nukes and not much else. No real practical benefits. Perun on youtube covered this with the regard to the war. It seems Russia, much like the US, has some budgetary albatrosses. It would be funny if it wasn’t all going to crap like maintaining weapons and stuff. Like seriously, what are you going to do with a hypersonic nuclear missile? It has no built in doctrine other than imagined deterrence that regular ICBMs already covers (regardless of first or second strike scenarios). 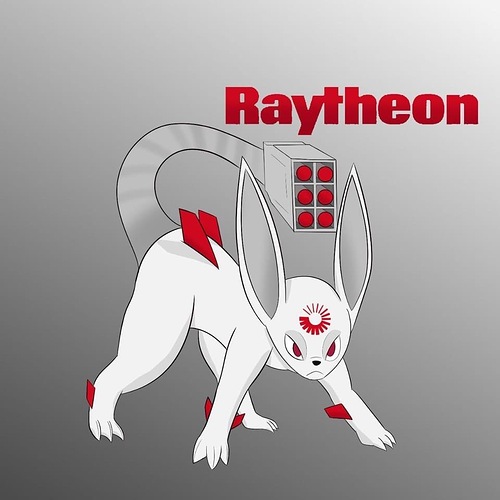 We have entered the Archer universe. I suspect it’s the next incarnation of Barry.

I’ll keep posting this when robot dogs are mentioned.

Not even their own work. Just sad.

I’ll have bunches of bananas over here if anyone needs them.

Hopefully the Chinese vendor will be willing to produce a de-branded variant suitable for an ‘import substitution’ success story. Great Leader loves import substitution; and he’s less picky about the shortcuts you take to be able to slap a ‘made in glorious motherland’ sticker on the result.

I’m unclear on why the bother with some of the elaborations (super-hypersonic whatnot; cavitating nuclear tsunami torpedo, etc.) when it remains the case that people are fairly pessimistic about getting even remotely acceptable intercept rates against (by now downright antique) MIRVed ICBMs with decoys; but the spending on the rocket corps generally has a kind of logic to it.

Yes, money down the rat hole compared to a wide variety of worthwhile projects; but compared to other options for holding onto the belief that you are a great power it’s both relatively inexpensive and(perhaps more importantly, given the superb quality of governance available), it’s a project that can be carried out with sufficiently narrow focus that an otherwise dysfunctional kleptocracy has some hope of scrutinizing it extra carefully and making it clear that this particular sector is not the one to try to get your beak wet in, on penalty of some sort of message-laden suicide.

Something like building a functional country or robust institutions pays off in ways that stockpiling nukes does not; but it’s not inexpensive and it requires the ability to turn money into results rather than slush funds across more or less the entire range of social and political activity, which is vastly more demanding in the face of institutional weakness.

Even compared to (relatively) similar and (relatively) narrow military alternatives polishing your strategic doomsday stockpile still has that advantage: the amount of manpower required is relatively tiny(so the rocket corps will feel the pinch from demographic collapse or lack of motivated recruits long after other service branches have been hollowed out or basically collapsed); and you only need to spread the missiles out a bit to avoid having them all lost in one hit; not maintain a nation-wide logistics network for relatively slow moving ground forces, so there are a lot fewer places for money and goods to leak; plus there’s no need to have a deep industrial base to back it up; since nobody really makes contingency plans for how they’ll replace their nuclear arsenal after WWIII is over, while needing enough heavy industry to replace tanks and artillery and keep yourself in ammo can, not at all hypothetically, become an urgent problem before you’ve even declared ware.

I’m unclear on why the bother with some of the elaborations (super-hypersonic whatnot; cavitating nuclear tsunami torpedo, etc.) when it remains the case that people are fairly pessimistic about getting even remotely acceptable intercept rates against (by now downright antique) MIRVed ICBMs with decoys; but the spending on the rocket corps generally has a kind of logic to it.

Money. Russia has always had a grift problem even before the collapse of the USSR. Whomever is the best connected with Putin often gets sweet heart deals with the government. It’s also why many of the more complicated industries are ignored since experts like engineers don’t normally want to work with mafias, which effectively is what the Russian Federation is at the national level, as they’re unstable institutions thus such expertise is just farmed out to other companies that aren’t Russian owned. The weakness of this situation is that eventually when the Russia system needs to do anything complicated it often has to settle for the lowest tier solution to their problems.

The US military industrial complex (MIC) has a grift but it’s a bit more complicated and oddly competent when forced to deliver a product. Personally, I believe the US’ MIC is well on its way to being similarly incompetent in its own corruption. 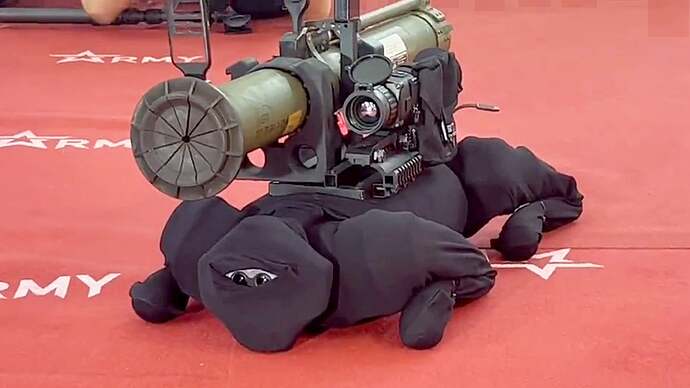 Russia's Rocket-Toting Robot Dog Is Chinese, For Sale On Alibaba

Russia's oddly cloth-wrapped rocket-armed robot dog appears to be a consumer-grade type that you can buy from Chinese marketplace websites. 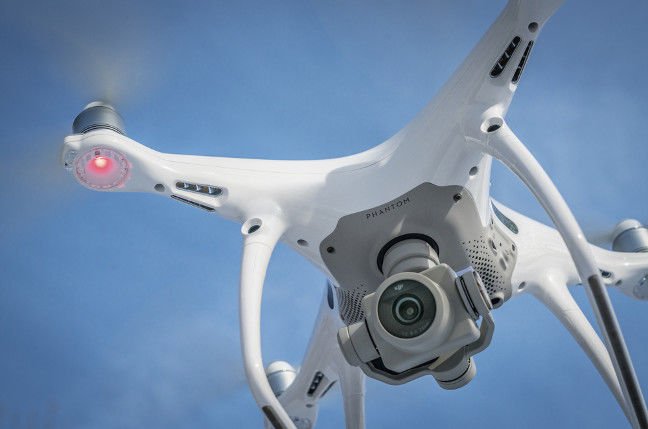 Testimonials from Russian generals not welcomed by DJI or Unitree Robotics

Russia’s military has praised civilian grade Chinese-made drones and robots for having performed well on the battlefield, leading their manufacturers to point out the equipment is not intended or sold for military purposes.

Well, there was this… 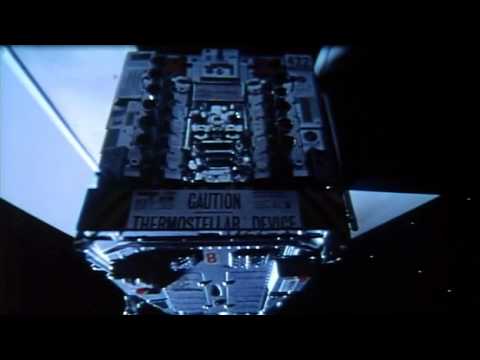