Surely we’ve passed the threshold where this is newsworthy?

I’d be more interested in knowing when he’s made a public appearance and not appeared intoxicated.

It’s rather sad, to be honest. The guy is clearly not fit for office. It’s bizarre that there is no mechanism to remove him. What is the plan here - a fallow major who stays in office until his term is up? Hopefully he stimulates a more energetic contest to replace him, and the city doesn’t suffer too gravely whilst he sticks it out. When is he due for ousting by the ballot box?

Sounds like he did more than complete rehab. He utterly defeated it.

The yokels outside Toronto who inexplicably get to vote for Toronto’s mayor still want him.

Well the good news is that the election is coming up in October. The bad news is that he is running second in the polls and is within striking distance of winner (no I don’t understand it but I guess I qualify as one of those “downtown elites”). None of the other candidates are exactly causing excitement and Ford knows how to get press even if it is often negative.

Well he certainly does look relaxed.

I hope he can find sobriety before his addictions lead to even more severe consequences. His privilege has kept him out of danger so far, but that wont save him if he doesnt start making better choices.

So, I’m assuming that all of his supporter are totally cool with people just doing all the drugs, and would never dream of suggesting that someone should be put in jail for it, right?

My brain auto-corrected the headline to something more clickbaity.

Mike Tyson (yes the biting, brawling, boxer and convicted rapist) has endorsed Ford, and declared him the “best mayor in Toronto history”.

I shit you not. 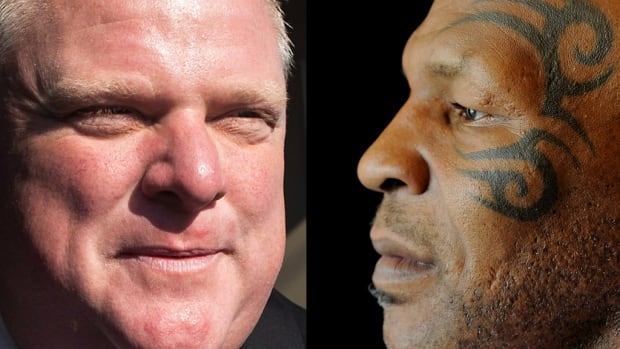 You’ve been playing too much Huffing Boing Boing!

Sounds like he did more than complete rehab. He utterly defeated it.

He became his own boss monster.

Hmmm. That would have been an interesting way to end an old Doom level: giant empty room (or symmetrical maze?) where the boss is a reflection of the player. Pointless, of course, but a great way to irritate the player or set up a puzzle.

He seems coherent and very relaxed. The physical lolling could just be the subway. Ford spectacularly detonates with enough frequency that we don’t need to infer intoxication where it might not exist.

It’s certainly a good technique for somebody in his position. If he’s wobbling back and forth and has trouble standing straight, you can’t tell if it’s from the subway, booze, or DT’s.

No he isn’t. His poll numbers have been at 27-28 on every single poll except one (presumably the one out of twenty that isn’t inside the margin of error) ever taken for this election. They are utterly impervious to moving either up or down and he is the second choice of absolutely nobody.

With two other people who have any existence on the polls, the absolute best result he can ever get is that they evenly split the other votes 36 percent each and he only loses by 9 points. Any other result has him losing even worse.

The chances of him winning this election are very close to zero.

The physical lolling could just be the subway.

Or it could be that he’s a little boy trapped in a big man’s body.

None of the news reports I saw suggested he was intoxicated. They did make great fun of the fact that (despite what it looks like in the clip), there were only something like 4 riders when he came to pitch “we need to expand this subway line” to riders (that particular line is an underused one).

I will grant you the most resent polls (ie yesterday and today) look more promising, but before that he was only 3 or 4 percent behind the leaders (who ever they were that week) with 10-15% still undecided. That said, I suspect you are right when you say most of the undecided are in fact looking to vote for anyone but Ford.