I’m sure the GOP moneyCon and neoCon establishment’s over-riding goal has been to prevent the pandemic response from making the case for socialised medicine and/or a UBI.

I mean, they also liked that it was disproportionately killing people like blacks, prisoners, and city-dwellers who were more likely to vote Democratic. I wish that was cynicism, but they actually said so.

i have to take a somewhat contrary position. even with the rather ridiculous concessions manchin and sinema demanded and received, this bill represents nearly double the value of the arra passed in 2009 to respond to the great recession as a fraction of gdp. even with manchin and sinema showing their butts on this we had 50 votes from 50 democrats. in the senate of 2009, just 12 years ago, there would not have been 50 democratic votes for this bill even though there were 60 democratic senators. manchin and sinema, for all their flaws represent the liberal end of the blue-dog spectrum and we are lucky to have them instead of democrats like joe lieberman, ben nelson, or max baucus.

I agree with Uygur’s overall sentiment, but it’s the non-progressive Dem establishment that’s refusing to use its power.

manchin and sinema, for all their flaws represent the liberal end of the blue-dog spectrum and we are lucky to have them instead of democrats like joe lieberman, ben nelson, or max baucus.

We’ll have to disagree there, especially about Manchin. He’s an economic and social conservative who’s decided his political power lies in covering the Dems and helping them make their thin margin. It’s only a matter of time before he pulls a Lieberman-style betrayal. Sinema is cut from the same cloth.

End the filibuster or weaken it

I saw it as a juvenile attempt at best, at worst a slap in the face of every American that desperately needs relief. She’s on my shit-list. We need action, not piddly drama…

There might not BE a next time for them to rethink their poor choices in a decade.

mancihin and sinema as democrats makes the difference between majority leader schumer and majority leader mcconnell just as much as the incredible work stacy abrams did in georgia.

The best ideas I saw for weakening the filibuster was this article: https://www.washingtonpost.com/outlook/2021/03/02/manchin-filibuster-never-sinema/

One way to restore the filibuster’s original intent would be requiring at least two-fifths of the full Senate, or 40 senators, to keep debating instead requiring 60 to end debate. The burden would fall to the minority, who’d have to be prepared for several votes, potentially over several days and nights, including weekends and all-night sessions, and if only once they couldn’t muster 40 — the equivalent of cloture — debate would end

We’re in basic agreement on the math and on the need for a stimulus bill to pass. But Manchin’s not a liberal on the issues and Stacy Abrams had to work a lot harder to ensure that the Dems had a Senate majority while remaining true to liberal core values.

As for factions within the party, I wish the leadership gave progressives half the respect and concessions they regularly give to the conservative types. That’s the real reason the Manchins and Sinemas get to hold the party’s legislation hostage again and again. That’s the reason the Dems have been constantly on the back foot and engaged in a permanent holding action in Congress for decades.

Things have improved since 2009, but with the thin margins we’re stuck with it really doesn’t make a difference whether the party leadership is folding to 12 or 5 or 2 DINO Senators.

All of you people criticizing Senator Sinema are sexists! Just as the sans culottes were sexist for beheading Marie Antoinette.

You do know The Babylon Bee is sarcasm, right? It’s meant to be read as humor, not news.

but Democrats didn’t pull an Obamacare of trying to get Republicans on board for months, watering down the bill, and then having them not vote for it anyway at the end.

Congress was sworn in in January and the checks were going to be $2000. It is now $1400 and March. It sounds like they spent months and cut targets to get Republicans on board only to have them pull the ball away.

This straight up GQP playbook bullsh!t right there for your eyes to witness, proof, evidence.
Stop defending this, she knew the what she was doing. And Americans suffer for it. Nobody gets a pass on this, they’ll get what they deserve at the ballot.
The folks that voted AGAINST make $175K a year, $175K of your money, taxpayer money, they work for us, not the other way around. Wake the f’ up! 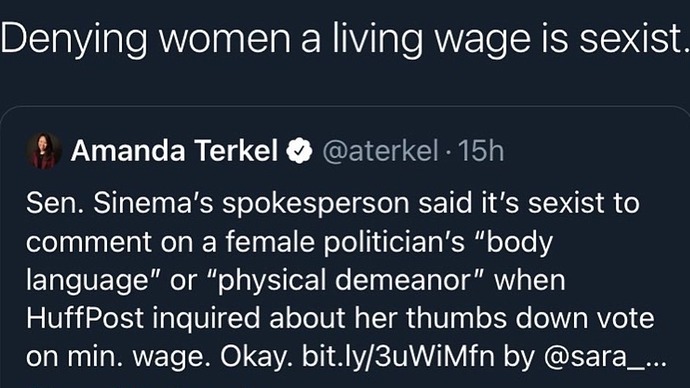 Only part of the party ever bought that garbage math. It was an active point of contention two months ago $1,400? $2,000? The stimulus checks debate, explained

These people in Congress/Senate make $3500 US dollars a week, you don’t. There’s your explanation.

The folks that voted AGAINST make $175K a year, $175K of your money, taxpayer money, they work for us, not the other way around. Wake the f’ up!

These people in Congress/Senate make $3500 US dollars a week, you don’t. There’s your explanation.