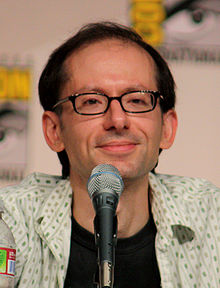 Phil Hartman as Troy McClure "Bart the Mother" is the third episode of The Simpsons' tenth season. It originally aired on the Fox network in the United States on September 27, 1998. In the episode, Bart accidentally kills a mother bird with a BB gun, and decides to hatch and take care of the two eggs he found in the bird's nest. "Bart the Mother" was written by David X. Cohen and directed by Steven Dean Moore; it was the last full-length episode Cohen wrote for The Simpsons before leaving to ...

(i.e. the greatest argument of evar)

If God was protecting them, why the fuck did He even put a goddam croc there in the first place? The guy is inept at best.

“God does not play dice with the universe; He plays an ineffable game of His own devising, which might be compared, from the perspective of any of the other players (i.e., everybody), to being involved in an obscure and complex variant of poker in a pitch-dark room, with blank cards, for infinite stakes, with a Dealer who won’t tell you the rules, and who smiles all the time .”

Dr Nick says “Too much saltwater Croc is bad for the arteries”.

But, capable of living in salt, doesn’t mean they won’t live in fresh (and most of them do).

The crocodile looks to be an endangered American crocodile ( Crocodylus acutus ),
not a saltie ( Crocodylus porosus ) native to India, Southeast Asia and northern Australia.

that was supposed to be a joke???