Originally published at: Simply telling the truth amounts to a monumental decision of "historic magnitude" over at FOX News | Boing Boing

Hiding their audience from inconvenient truths is their prime directive. Those damn liberal-sympathizers calling the election stuck the audience’s noses in a big pile of reality. Of course they’ve been fired

When talking heads take it upon themselves to alter reality you probably have a propaganda problem.

Well, it is something they have never done before or since, so it is pretty significant. Luckily the fix is in and they won’t be making that mistake again.

Every deviation from the approved talking points is monumental.

Fox News is the Republican Party. Here are over 400 examples proving it.

Only very tangentially related, but reminds me of watching the election results come in for Obama’s first run. I was living near Catholic University in DC and went to a local bar to watch. They had TVs tuned to every different channel covering results.
A couple clearly conservative, military guys were sitting next to me at the bar, and when the coverage started showing Obama had definitively won, they exclaimed in horror and disbelief, jumped up from their stools and ran over to the TV tuned to Fox “news.” Only then did they believe that it was real.
This is what we’re dealing with, and have been for a while.

When talking heads take it upon themselves to alter reality you probably have a propaganda problem.

It’s always the people talking about election fraud the most out there actually trying to sway an election. Also gearing up to tweak people’s sense of outrage by messing with people’s emotions - say they won then reality yanks it away.

Why edit the helicopter text from the original “Not racist, but #1 with racists.”?

Love to see how historians clean this up a century from now, try to ‘both sides’ it, because calling Republicans outright fabulist assholes wont be historian-ish to make it into a book.

Or FOX for Frightening Old Xenophobes, I guess?

Why edit the helicopter text from the original “Not racist, but #1 with racists.”?

Because that’s simply no longer true. The corrected version unfortunately now is. Tucker Carlson and others on Fox are unabashedly using talking points straight from white supremacists. They’re not even bothering to be subtle anymore, so we can’t even pretend they aren’t racist.

Tucker Carlson and others on Fox are unabashedly using talking points straight from white supremacists.

Tucker Carlson is openly calling for the elimination of transgender people. 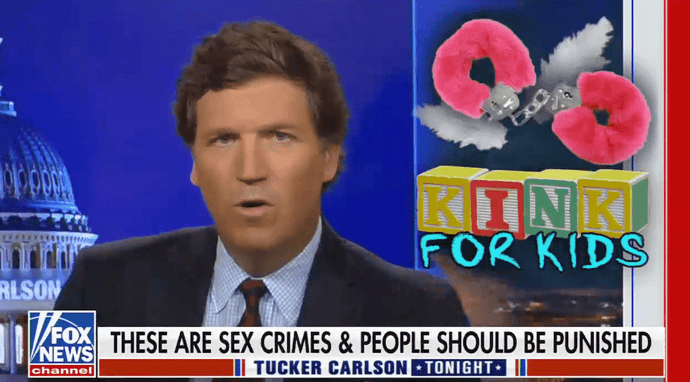 Forget racist, Fox News is now one of the voices of the American version of Radio Télévision Libre des Mille Collines.

Love to see how historians clean this up a century from now, try to ‘both sides’ it

… as with Reconstruction, it’ll depend on who wins

Which is also part of these white supremacist talking points. Though given his love for Orban, maybe it’s more accurate - and encompassing all his positions - to just call Carlson a fascist.