What’s the BB prognosis? Fascist coup backed by assorted EU Lizards? Stonewalling til they either starve or compromise? Domino effect and Italy and Spain do the same thing? Come on, people, lively debate time!

I’m surprised there’s no article here yet. The Daily Mash is on it with its usual aplomb though: http://www.thedailymash.co.uk/news/international/greeks-vote-to-stop-having-shit-kicked-out-of-them-2015012694755

EU technocrat Denys Finch Hatton said: “There is a very real danger that people across Europe, inspired by the Greeks, will no longer choose to be ruled against their best interests by people they never voted for living in massive wealth hundreds of miles away.

“Though we hope they will follow the fine example Scotland set and continue to do just that.”

I don’t take part in discussions of international politics any more, I’m too defeated and embarrassed by 55% of my countrymen. They feel no shame.

There are rumblings of an SNP/Labour* coalition today. Daveybloke must be shitting his pants.

*who are still bought & paid for corporate whores

At least an SNP/Labour coalition makes some kind of historical sense. I would prefer some kind of SSP resurgence surgence(?) and coalition (I can dream can’t I?).

But sidling up to UKIP (which, in England at least, seems to me an inevitability, given enough time) might be so terrible as to push me to join/form some kind of Anarchist party. Hopefully it has a kind of similar effect in Greece.

At least the fallout from the inevitable infighting in the coalition might spur the Greek people to a greater grass-roots involvement in their party politics. I imagine the turnout was quite high but can’t quickly find the figures.

I dunno. The simultaneous retraction from and reliance on Europe is starting to make some European nations (UK, I’m looking at you) look a little dissociative in their identities.

It’s bad enough to have journalists writing as though all their readers have threatened holdings in esoteric Greek debt instruments of some kind; but the lack of historical perspective is just plain galling. Time was when ‘extreme left’ involved expropriating with extreme prejudice and sending the kulaks to the gulag. Now ‘people who gambled on risky sovereign debt risking a loss of asset value’ qualifies? Bah!

There are rumblings of an SNP/Labour* coalition today.

The Sunday People think Labour will win outright. It must be nice to be that hopeful deluded.

But sidling up to UKIP (which, in England at least, seems to me an inevitability, given enough time) might be so terrible as to push me to join/form some kind of Anarchist party.

The Socialist Party of Great Britain is about as close as you will get at the moment (NOT the Socialist Party though, they used to be Militant Tendency before they were kicked out of Labour). Most anarchists here won’t vote for anyone though.

This is why I think that putting the centre in between the two main parties is bullshit except in a few rare situations. SNP-Labour might be centrist but Labour-Conservative is right wing. Conservative-UKIP would be time to leave the country.

That’s an interesting point concerning anarchists. Perhaps we could start to count individual bombings as votes?

Conservative-UKIP would be time to leave the country.

What was I just saying about bombs?

Perhaps we could start to count individual bombings as votes?

I thought you might have, but you still get the occasional idiot who thinks that bombs will achieve something other than pissing everybody off.

It’s best to discourage them.

Bombs being the defining emblematic symbol for anarchists everywhere, we should take up the label and make it our own… just like the ‘Tories’ did with their slanderous moniker.

There are only 2 tickets which will convince me to vote for anyone:

As this is a nation of drugged sheep who a) don’t have the guts, balls, nor gumption to campaign on either issue (and because everyone thinks the NHS is so fucking wonderful because it’s keeping 'em so fat and drugged, they don’t have the minds to think for themselves).

I won’t vote Labour - and especially not after I read with abject HORROR that Burnham wants to pass a law that would force kids to eat low-fat, low-sodium and low-sugar food, as if that’s gonna somehow magically reverse the current epidemic of fat kids (here’s a newsflash for ya, Andy; the NHS has been advocating exactly that for adults for over 4 decades - not exactly been very successful, has it…?). If that law was ever to be passed, the country would overtake America as the world’s fattest nation within a decade.

But I’m a 21st century Cassandra, so I’ve given up extrapolating.

Vote NO! with the weapon of your choice today!
(any old school RPG nerds remember which game that’s from?

So, what are your views on cruise missiles, then?

The same, except discouraging governments from using them is harder. 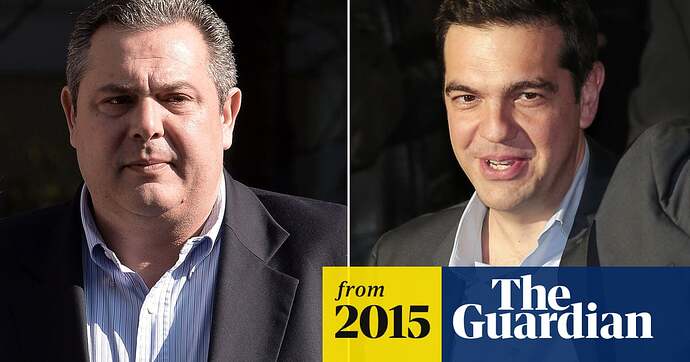 Syriza’s Tsipras sworn in after Greek government formed with rightwingers

Coalition with a rightwing party?

I really don’t understand why Germany decided to go into currency union with Greece. This sort of disparity in what the economies needed always seemed likely.

Labour are going to be toast in Scotland, the Tories don’t give a shit since they can’t lose more than 1 seat. SNP in coalition Government would only strengthen the likes of UKIP.

I suspect a minority government of one form or another or a Con/Lab coalition. From what I’ve read (from the likes of Wings over Scotland), lots of Scots don’t see any difference between Labour and the Conservatives. UKIP in coalition would lead to riots.

It’s a real shame that too many numpties voted against AV. There’s clearly demand for broader representation beyond the two big parties and yet the same people voted to keep the FPTP system that entrenches them. Idiots.

I predict many of the same people who voted no for independence will vote for SNP in the next general election, effectively handing them a mandate to proceed with a de-facto independence.

I talk to these no voters and I ask them why they won’t vote for the tories or for labour any more (a lot of them will still vote for labour) and they generally don’t have an answer.
I can only assume they are too cowardly to actively vote for independence and are happy for the politicians to go ahead. The people get to wash their hands of the hard decisions and the blame can be laid squarely at the feet of the elected officials.

I’ve long thought that politicians have been the excuse for civilised people to blame for the dirty work they can’t bring themselves to admit they support. But when it’s a positive change? They still want the politicians to take the blame for something they are too scared to take part in directly.

Argh. Democracy in its current form does not work properly.

Yeah, apparently, “Hey, no one likes this and all evidence says it isn’t helping, maybe we should stop?” is an extreme position.

As for the headline, what comes next, I’m afraid, is a bunch of hardline right-wing parties (i.e., racists bordering on neo-nazis in places) take other European countries. Terrible economic times enforced by out of touch politicians that pander to the rich have got people in Europe angry, and they radical parties are gaining popularity everywhere. Unfortunately, radical is what people want, not any particular form of radicalism. I mean economic turmoil rocks Europe and radical political parties are on the rise, no one could have seen this coming, right?