If she can’t allow abortion when a 10-year old child has been raped, then where does she draw the line? 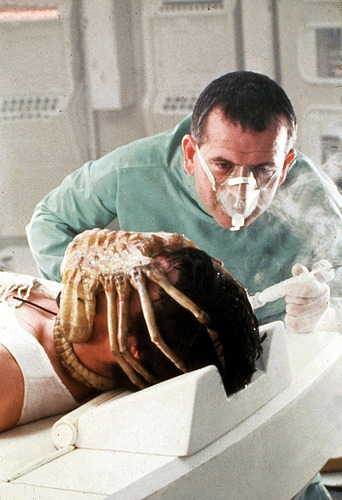 It’s amazing how fast all these hypotheticals are becoming real world consequences.

Honestly, it always was. But it’s just getting harder to ignore.

How do they not get stabby?

and at some point a child will die from a forced pregnancy.

All to save a hypothetical child.

And of course the Governor should also shut the fuck up even if she is willing to do those things because it still isn’t her own bodily autonomy being violated.

At least one clear flaw in the reasoning

OH. I see your problem. You think people are using “reasoning” and “logic”… They are not. They intend for women to be made second class citizens whose most basic rights are curtailed in order to ensure that white men are in charge. They have their own twisted logic and reasoning on this stuff.

Yeah, but you have to pinpoint the hypocrisy and really drive it home for people who are ambivalent about this.

How can anyone be ambivalent about this anyway. The fact that ANYONE is at this point just shows how much some people are up their own assholes and buy into the idea that there is not society, only individuals.

Much moral bullshit, leading to child being traumatized yet again

This is the Overton window at work.

BS. Lots of left-wing dudes have been telling us for years that we should not put reproductive rights front and center, because it’s not a “real” issue that impacts everyone, just a “women’s” issue. If the men on the left had been far more proactive on this issue, perhaps we would not have constantly been ignoring it.

Don’t give them ammunition for strawman arguments

which is controlling women and flexing for Christian nationalism over civil rights and democracy.

You’re not winning the people who really believe that over. All you can do is work for their political marginalization.

Can anyone make actual sense of those phrases she uttered?

The Christian fascist right can, yes.

carefully constructed ambiguity in the reasoning, inviting supporters to hear what they want to hear a

I had to stop the video after the first deflection to ‘what about the rapist- what’s being done about him?’, because THAT IS NOT THE POINT OF THE QUESTION. Assume that the rapist has been punished appropriately (i.e., castrated with a broken coca-cola bottle in a back alley, or has been given over to Bubba in cell block C for fucking over a kid’s life) and ANSWER THE QUESTION THAT WAS ASKED.

They intend for women to be made second class citizens whose most basic rights are curtailed in order to ensure that white men are in charge. They have their own twisted logic and reasoning on this stuff.

… Which is probably the reason for the deflection in the first place.

Which is probably the reason for the deflection in the first place.

That made me think of this.

Conservatives are gun fetishists who worship the idea of one group of people being better than the others by right of birth. That simply who Mommy and Daddy was makes them better than you. They are the idiots that were born on third base and think they hit a triple.

They are worthless liars, claiming to follow the teachings of a radical Nazarene rabbi who preached about embracing the downtrodden when they really worship Moloch, worship Mars, worship Crom Cruach.

The governor of South Dakota is another believer in blood sacrifice, in making others suffer so that she can feel superior.

Assume that the rapist has been punished appropriately (i.e., castrated with a broken coca-cola bottle in a back alley, or has been given over to Bubba in cell block C for fucking over a kid’s life)

I agree with your larger point about deflection but would reiterate that there is no appropriate place for sexual assault in our society or our penal system, even against convicted rapists.

Lately I’ve been thinking about how Ireland legalized abortion, and the situation that inspired that change - someone dying unnecessarily after a miscarriage.

I realized that’s not going to move the needle here - because it already was happening, in between Catholic hospitals and states with few to no one willing to provide abortions, even in the case of miscarriages. I don’t think a 10-year-old rape survivor forced to give birth and then even dying in the process is going to shift the debate at all. The anti-choice people don’t give a shit because they are in no way “pro-life,” pro-choice people were already outraged by the previous situation but unable to make changes, and people with no strong views live in a country with extreme maternal mortality rates and the normalization of bad medical outcomes due to lack of care.

some child will be forced to carry a pregnancy.

and at some point a child will die from a forced pregnancy.

It’s inevitable. Plus, women’s lives are already being put at extreme risk, unnecessarily, in states where abortion is still legal because of all this shit. It just spills over - even in the absence of explicitly bad laws, enough actors are so risk-adverse that terrible outcomes that no one was even demanding come true; if we start off with bad laws, the outcomes are monstrous. 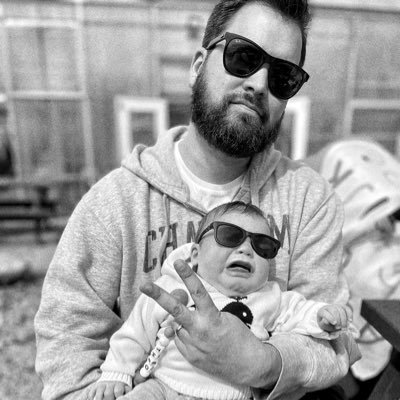 @PSYCH_HYPE
Look at the damage caused by the right-wing SCOTUS justices https://t.co/daikVBOnZ0 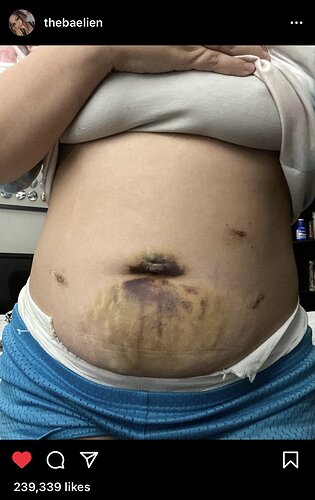 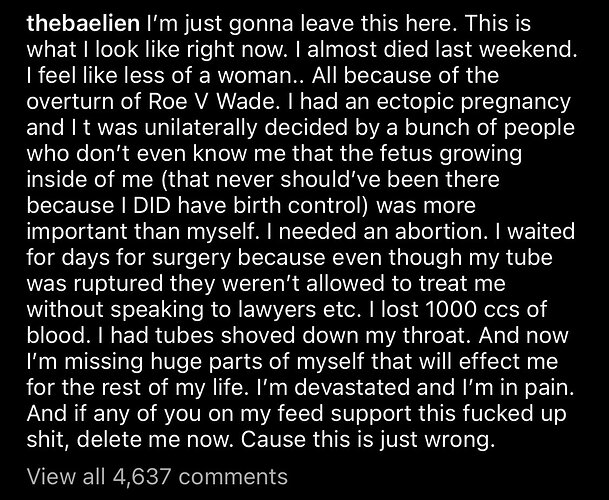 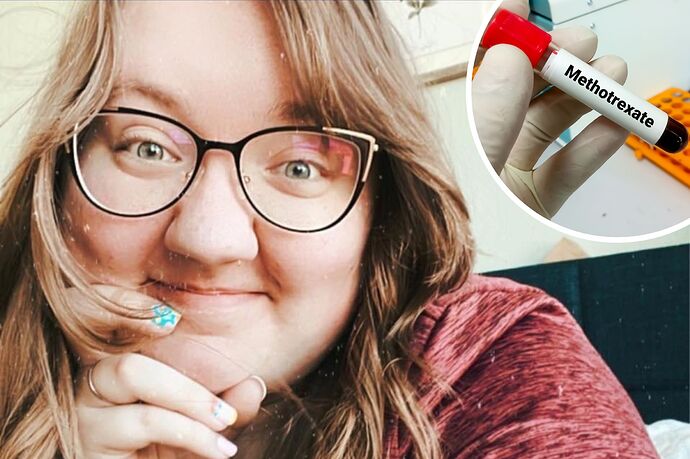 "It took 144 hours for me to have less safe healthcare because Roe was overturned," she wrote.

Some years ago I was reading about what was essentially a small pro-choice women’s terrorist group in Germany in the '60s or '70s. (I forget the details, but they were destructive and threatening and no one was ever hurt, but they did put the fear of god into anti-abortion forces.) My immediate reaction was, “How did that not happen here?” my second thought was, “Maybe that should still happen here.”

“Would you rather have been aborted?”

I’m always taken aback by that kind of question. It’s a pointless “what if” masquerading as the dumbest possible gotcha question. It’s exactly the same as, “What if your parents never met!” except one can’t even pretend there’s a moral dimension to that.

I don’t believe a tragic situation should be perpetuated by another tragedy.

So she doesn’t believe that a child rape should be “perpetuated” by forcing a child to forced to undergo the physical and emotional suffering of pregnancy, birth before her body is mature enough to safely undergo parturition, social trauma of being a pregnant at that age, her education disrupted, and likely the rest of her life dedicated to being the unprepared mother of someone more appropriately her little sister?

That kind of cruelty says a lot about the State that elected her to provide them with that kind of sadistic “entertainment.”

Noem: “I don’t believe a tragic situation should be perpetuated by another tragedy.”

The girl’s tragedy is only just beginning in that she is expected to bear and give birth to the child of her rapist. I don’t hear much consideration about the way her life is going to be destroyed - but the Republicans don’t really care about the brood mares.

“I don’t believe a tragic situation should be perpetuated by another tragedy.”

I had to read that several times before I understood that, for Noem, it’s a “tragedy” when a 10-year-old aborts a rape/incest embryo.

17 posts were split to a new topic: Political theory

These fascists and their fellow travelers seemingly will take up any position at all if they think it will “own the libs”. I’m bracing for things to get much, much worse.

“The ethical dwarf, posturing on the moral high-ground, presents a ludicrous spectacle “
This, of course, applies to pretty much every Xristian fascist, they only care about moral point-scoring, so come the day of the Rapture they can present a nice full card at the Gate and stroll in, head held high in their moral superiority.
Assholes.

Between their stances guns, abortion, cops, immigration, and war, nothing seems to delight the right more than cruel and unecessary child death. Which makes their self-applied “pro-life” label all the more perverse and cynical.

It is all God’s will and I hate this God and its disciples with all my heart.

It is all God’s will

Let’s not forget that the rapist can get custody of the child and sue her for child support!

Louisiana woman says her rapist was given custody of her child in ongoing court dispute (nbcnews.com)