Many of us like to talk about movies, television,and other art. But it is also annoying when you don’t want to know about a particular plot point, so most of us politely don’t mention them.

#Name of the work

If you want to talk about the same work,reply to the original spoiler or create your own bold named post. But I’d prefer to keep a work (say a movie) in a single reply chain as best we can.

Wait… what are the rules?

The rules are… I’m typing on a phone and there will be spoilers!! Warnings have been given.

Proceed no further. Unless you dare.

Fast and Furious spoilers - 3 of them.

I really enjoyed the film. The thing that really, reallyade it for me was the ending.

There will always be a monster below you.
You can still be happy, and have a family.
But you always must feed your monster.

The ‘happy ending’ was nicely subversive, similar to how I felt about The Ring.

Another part that I enjoyed was the implication that the mother was the one that wrote the book,and the one that reassembled it. And that was the invitation for the Babadook to come in.

But it was there the entire time, amirite?

There. I said it.

#Jay and Silent Bob Strike Back

Luke Skywalker is also… Uh… I just can’t say it.

I think there are some Oedipal references thrown in for uneasiness and to highlight the churning of subconscious drives which lie under the surface of every human mind.

Even though harrowing circumstances may make that divide paper thin, and prone to breaking, we can at least come to live with these unwelcome drives if we conquer our fear and repulsion of them.

I didn’t really get that. I got resentment (oh god, in truck loads), a kinda backwards sense of protection (the improvised weapons), but nothing Oedipal.

And I think the last few scenes are crucial to that–she returns to the role as the parent and he to the diligent child. With bounderies set. (I.e. don’t look at, interact, or question my demons till I say you are ready).

Frankly, I was kinda bored by the film and wasn’t paying that much attention and don’t think I can be bothered to go back through the film to pick out the references that suggested that to me but… I did like the ending.

Subversive takes on dealing with demons infiltrating regular, modern culture seem to be popular at the moment.

Are you familiar with the concept of Choronzon? I’m not so sure the best idea is to make friends but the Buddhist in me suggests that annihilation is not a sensible path to take either. Cognisance, of the existence of such drives and attention paid to them, is enough.

I am not. I have some googlin’ to do.

He gets in the way.

I’m pretty firmly convinced that this movie was about a mother’s struggle more than anything else. I do think there are some uiversals to be found, but I do think the focus was on what motherhood can do to you, especially when it’s being done alone and after some serious trauma.

That is a reason I guess that I liked it. Cause you ain’t wrong. I don’t have that lens or vantage, so I didn’t really watch it that way. But now that we are talking about it I totes grok what you are saying.

I don’t think it can’t be a broader story about grief, but I do think that it’s kind of a specific story, about a specific thing.

Well, all I know is the kids back mounted catapult couldn’t have got that much distance

I know, right… but I kind of wanted one anyway, bad physics be damned! The kid was quite crafty in the homemade weapons department, wasn’t he! 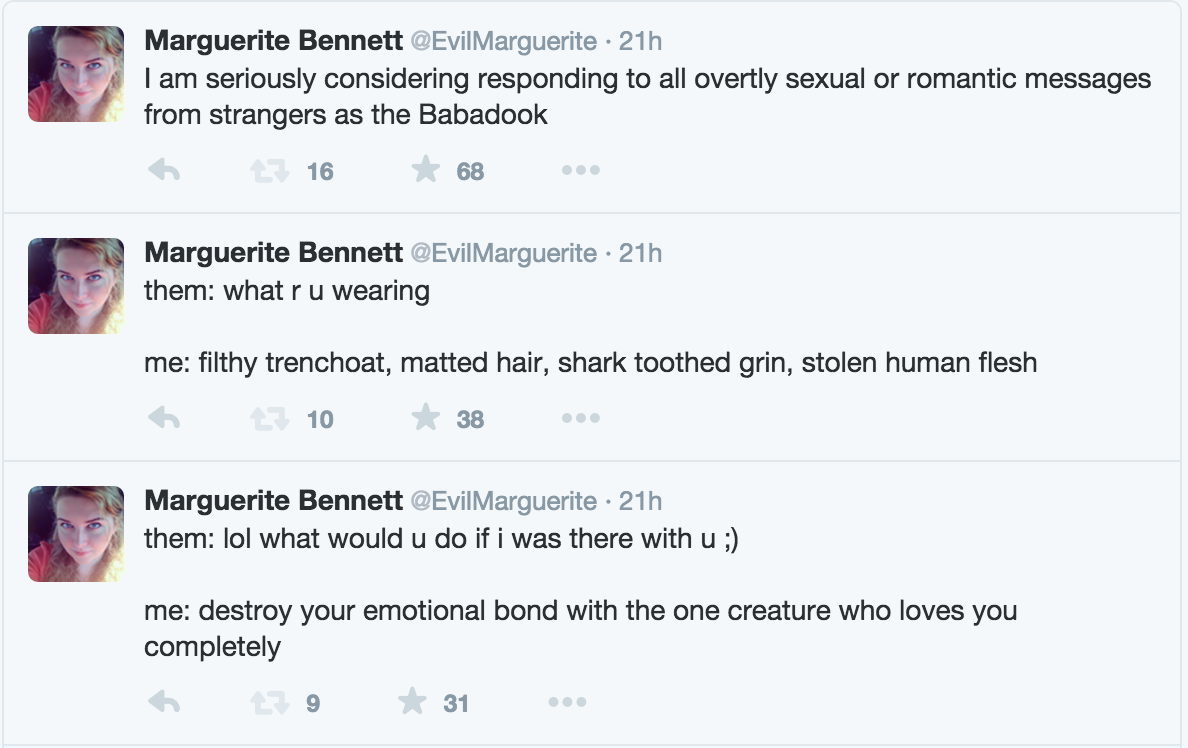 This topic was automatically closed after 482 days. New replies are no longer allowed.