There are no words for how much I love the fact that they come with carabiners.

Oh, that? Yeah, I always carry hot sauce on my belt loop. Doesn’t everyone?

For years, I had one of those from an MRE hanging as an ornament from my rear view mirror.

It sure is nice to live in a place where you don’t have to carry your own hot sauce everywhere you go!
[size=10]#sorrynotsorry[/size]

If getting it past the TSA screeners is involved then I don’t think its convenient.

Life is finite and sucks. Convenience is important.

I generally describe Tabasco as “vinegar with red food colouring”.

I actually like Trappey’s Bull sauce which isn’t at spicy and has a stronger vinegar flavor for cooked greens and generic veggies.
I rarely go for eye watering unless I am having Thai and feel a cold coming on.

Jalapeño Tabasco, however, is green, has a moderate nip to it, and works very nicely in a Bloody Caesar.

Don’t need a cold coming on to eat Thai, though. It’s just yummy.

Well, then, fuck it. I’m not playing. 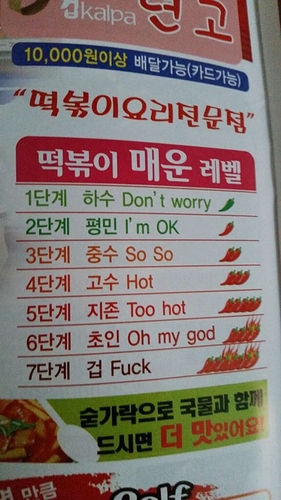 You can miss some of the yummiest stuff then - even flamethrower Thai cooking has a distinct flavour over and above the heat. My translation partner has been in Ottawa trying to get into post-grad programmes, has thrown some dinners for the family at my brother’s place. I recall a very hot white seafood curry (talk about misleading appearances, eh?) that was to die for.

That’s one of things I love about Thai food is that the heat never overpowers the flavor of the food. Mostly my ulcer prone tummy doesn’t need it that spicy on a regular basis as it isn’t worth the pain after the fact.

A similar situation to my sister-in-law, and she is not bearing it well - she’s Chinese Mauritian, and she loves her spices. Doctor’s orders notwithstanding, I suspect that her backsliding has instigated some of those dinner invitations to her favourite Thai cook…

Edit: I just got the official pronouncement on Sriracha sauce, and I’ll quote: “Babyfood for every thai.”

2nd edit: I’m rapidly coming to the conclusion that Thai cuisine is the Thai equivalent of a Maori haka - if they feed you the stuff they themselves eat, you are as respect-worthy as the recipient of haka.

Siracha is one of those foodstuffs that start out as an accompaniment and end up being the entire point.

Like, when did my ham and horseradish sammich become a horseradish and well-I-guess-I’ll-add-some-bread-and-stuff?