Also, do not wear brown shoes after 6 p.m. It Seems Like Sports Can’t Sink Lower Than Mayweather-McGregor. But Just Wait.

When you have nothing to sell, sell the racism, sell the hate.

At last, a suit that defiantly says “I have too much money, and I want to fuck you over so that I’ll have even more.”

Perhaps the statement it makes is the less aggressive and more assertive “You fuck”.

What opportunistic assholes, the both of them.

It would be kind of fun to dress up as a lobbyist wearing that and visit some high ranking right-wing senator. Assuming he can read.

I can definitely see some rock stars wearing this.

It’s a nice suit, shame it belongs to a douche.

I suspect that Trump’s instead say “Fuck Everything.”

I was half expecting this to be a Boing Boing’s Store post.

There is no part of me tough enough to even imagine wearing that suit.

That suit would beat me up and run off with my ex in my truck with my dog.

Since it includes trousers, does that make it a “pantsuit”? I am still mystified why some suits with pants (Yank trousers) are considered pantsuits but some aren’t.

It is pretty inconsistent and mired in now-obsolete tradition, but that’s clothing terminology for you.

this is merely a punk attitude which we sometimes defend. wear what you or go naked if possible. 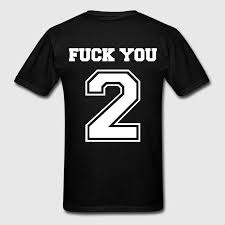 A pantsuit is used for formal running, since you’re likely to breathe hard.

Small potatoes in light of this:

I can definitely see some rock stars wearing this.

Rock stars. Wouldn’t a suit like that sort of be redundant?

Wow, some people are really chomping at the bit to let others know what despicable specimens of humanity they are.