In the producers’ rush to wrap everything up, the rough edges are really starting to show.

Also while it looks like Starbucks, the pedant in me has to say that the coffee cup is neither styrofoam nor a mug.

Does anyone use Styrofoam cups any more?

[ETA] But anyway, it’s a fail for the continuity department.

the rough edges are really starting to show.

That’s kind of disappointing… without spoilers, are they rushing the narrative, do you think? That sort of seemed like some of the problem in the last season… Part of the charm of the early seasons (and of the books, probably even more so) was the traveling, as it helped to give the characters time to develop and to forge real relationships (Arya and the Hound, and Jaime and Brienne being the two best examples). The last season seemed to rush those things that made you care about the characters in the first place…

That nobody caught this and edited it out before final release is terribly sloppy. Much like the season so far. 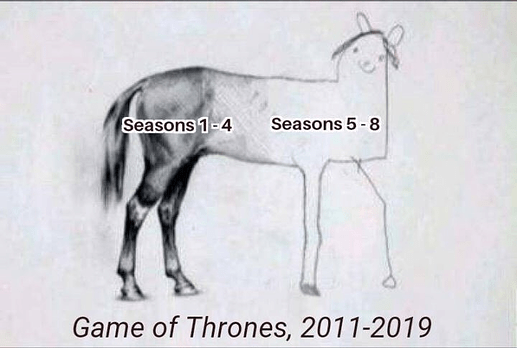 What next? A Boeing 737 Max flying into a dragon scene? Jon’s beard falling off?

I’m sure they’ll cgi it out in future versions of the episode. But for now, someone’s in trouble.

I was talking about this last night after the show. For the first seasons of GoT I was reading the books two or three chapters behind the show, which filled in details and colour about the world that enhanced the much more tightly written show (the books’ description of the tournament at Harrenhal was especially good in this regard).

At this point, though, with the showrunners effectively taking the franchise over, I’m not planning on reading the last two books unless the reviews say that they continue to add the depth and detail to what I’ve seen on the show. 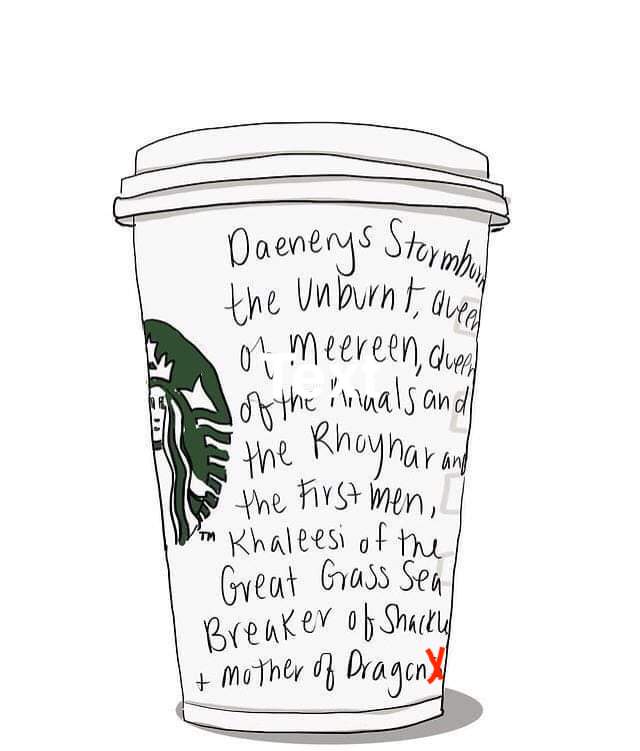 I’m not planning on reading the last two books unless the reviews say that they continue to add the depth and detail to what I’ve seen on the show.

I don’t see how they can’t given that they have several storylines not in the book, and are both apparently going to be rather lengthy works. Over and above the story itself, the world building is pretty great.

Does anyone use Styrofoam cups any more?

Dunkin’ Donuts, here in the northeast.

To be honest regardless of rushing or not, slips like this happen regularly in films and tv. One area that is notoriously great at avoiding this are daytime soaps. They are incredibly diligent about clearing sets and ensuring consistency between shoots. Even they have slip ups too OFC.

Now I’m trying to remember if that’s what they have here last time I went there… it’s been a while.

Edit: also in response to this…

That’s kind of disappointing… without spoilers, are they rushing the narrative, do you think?

They absolutely are rushing the final season. They are making some serious time jumps that would make the quantum realm scream “ok, hold up.”. I keep expecting to see little Stark branded time jump devices on people’s wrists.

But they kind of have to. They were told way in advance “You get 13 more episodes in 2 seasons to finish it up”…there are a lot of loose ends to tie off. And some of the massive plot devices that literally make no sense when you think too hard about them means we as an audience get frustrated, but they had to do it to bring themselves from Point D to Point J. Much like Endgame…I feel bad for the writers. They probably had this thing outlined over 4 more seasons, 12 episodes each and then scrambled to figure out what they could cut.

How DARE YOU infer that Jon Snow’s beard is a prosthetic!!

You haven’t missed much.

Has my gluttony outed me? Ok, I admit it, I get a DD medium coffee at least once a week. But it’s not my fault! I don’t enjoy it or anything, it’s just that they’re right near my office! And I almost never get a donut! Almost never!

This isn’t the first time a Styrofoam mug has done in a show, I think, maybe…

I don’t see how they can’t given that they have several storylines not in the book, and are both apparently going to be rather lengthy works. Over and above the story itself, the world building is pretty great.

I’m hoping that’s the case, because in a couple of weeks we’ll know how the major story arcs and characters end up (although, per Ramsay Bolton, I’m not expecting a lot of happy endings in Westeros).

To be honest regardless of rushing or not, slips like this happen regularly in films and tv.

My parents were film producers at one point in their lives. I remember being on-set as an teenager and noticing that a sign prominent in the frame of the barroom scene (being filmed in an actual bar) directly contradicted the dialogue and action. I pointed it out and was basically blown off (to be fair, the movie existed mainly as a tax shelter, so quality wasn’t high on the list of the director’s priorities).

They recently stopped using them and switched to paper here in Western PA.

To me, the douchyness of the VO outweighs the error.

My guess is that this was an early informal take of several takes and that because of reasons it made it into final edit. The flow and acting suited the director and nobody fine toothed the scene or overlooked the cup because the scene, “it worked.”

Why the entire cast and crew didn’t have these to drink from on set is just crazy: 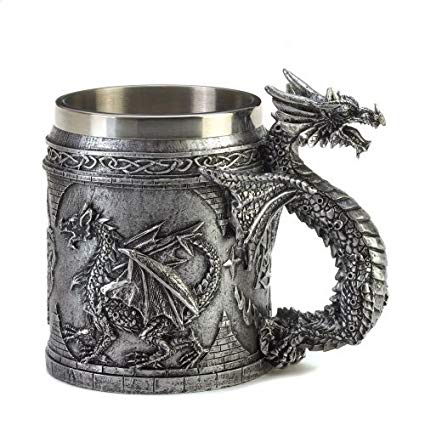 Real talk–we might get another book from GRRM, but none of us actually think he’s going to finish the story, do we?

R’hllor love’em, but he’s broken the narrative into a hundred different threads when he should have been bringing them together, and now he has no way to weave them back together in anything like a satisfying way in the space he’s given himself.

Sure, that is what it looks like but it is really a magical ceramic formed from the powerdered bones of White Walkers and fired by dragon’s breath and glazed in aurochs blood. Appearances can be deceiving.

Oh, and I’ve never actually watched as second of the program – Google is a miracle if you are looking for throw-away information…