Surprises can happen when firing a cannon at home

Originally published at: Surprises can happen when firing a cannon at home | Boing Boing

I saw this on the reddit forum WinStupidPrizes, and it seems staged. We don’t see the unbroken windows ahead of time, and the glass breaking sound goes on way too long, and it way to “clean.” I’m calling BS.

Can’t say I’m that surprised if this was real, having spent New Year 2020 in Amsterdam … closest thing to being in a war zone I can imagine, millions of euros worth of fireworks on the night.

That was pretty cool. I bet next time they will roll it out further from the house.

We don’t see the unbroken windows ahead of time, and the glass breaking sound goes on way too long, and it way to “clean.”

Honestly it would be more suspicious if the camera had shown the unbroken windows ahead of time. Why would they point the camera at the house if they were focused on the cannon firing?

As for the length of time we hear broken glass, it’s not just the sound of the glass shattering from the shockwave but also the sound of the pieces falling out afterward to hit the floor and ground.

Sure, but it’s the same sound, continuously. Seems added in, given the other background sounds.

I can’t imagine why anyone would bust all the windows in their home ahead of time just to fake a video like this.

Me, either. I could imagine that someone with already-busted windows and who was going to shoot off a cannon would think “aha, Internet glory awaits.”

I’m often overly-skeptical too, but in this case you can see some shards of glass falling down in the upper left when the camera points to the roof…
I know they like ‘carbidschieten’ here in the countryside (Carbidschieten - Wikipedia, calcium carbide explosions in big milk cans), but didn’t know they have cannons as well…

I can’t imagine why anyone would bust all the windows in their home ahead of time just to fake a video like this.

Although: Would that really be much dumber than what they seemingly did?

Personal experience: one of our friends likes to make medieval weapons. Over the last few years, he has brought a ‘hand-cannon’ to our New Year’s Eve parties. With double or triple load (wadding and black powder, no actual shot) it sets off car alarms for 1/4 mile with the overpressure wave.

Well this is new to me.

I found this article in English for others.

And I just realized - this uses the same principle as the Austin Magic Pistol - a toy gun that made a loud boom thanks to calcium carbide and water (or spit). 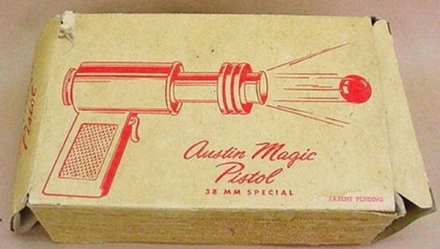 Astute readers will notice that the Austin Magic Pistol isn’t a classic, or a replica or even an air pistol. But this 1950 kid’s toy is so endearingly insane that it just has to be worth covering h…

I wanna know what happened with the kid on the slide.

Bunny D; she likes the cars that go boom, apparently.

from the late 80s through the early 00s the sister of a close friend who lived in a gated community on an east texas lakefront had a joint interest in a 3 inch diameter cannon along with 6 other families in the same community. they had gotten it as an escalation in the july 4th fireworks wars with another gated community across the lake. a couple of times when my friend came from his graduate work out of state he would take me to the party. it was . . . idiosyncratically texan, for sure. they had worked out a standard charge of smokeless powder and packed it with a standard wad of butcher paper.

Thanks to @boingboings ad happy page, I can’t turn on sound as the button is blocked by the ad!