You already have a thread for this. It’s called:

I may have to report you for starting multiple threads with the same theme. Please try to stay focused, @OtherMichael

@Daneel will be up against the wall, because: 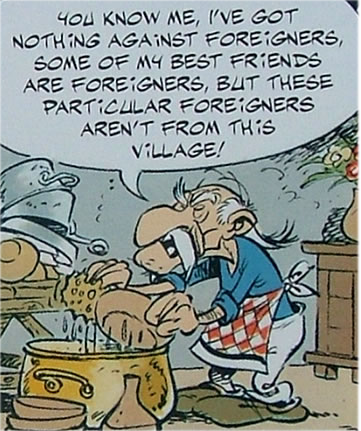 To pass through South Dakota, wouldn’t that have meant going to Minnesota?

I don’t know why all you Engrish insist on going to the coldest parts of the USA. What is UP with that?

Aren’t you American types mean to take a pilgrimage to Mount Rushmore once in your life, or something?

But San Francisco is so much more posh.

You’re making me hungry. Posher matzos and manichevitz over here to me.

@Daneel will be up against the wall, because:

@OtherMichael will be up against the wall for this crap poll I can’t even click on.

Continuing the discussion from You Maniacs! You blew it up! Ah, damn you! God damn you all to hell!:

You Maniacs! You blew it up! Ah, damn you! God damn you all to hell!

THE PLANES WERE FAKE!
THEY WERE FACSIMILES CONSTRUCTED OF NINJA SPIDERS TRAINED IN THE ART OF DEMOLITION.

Continuing the discussion from Trump's supposedly going to denounce birtherism. Will the media wash his hands for him?:

On last night’s show, Jimmy Fallon:
• Mussed Trump’s hair and giggled along with Donald
• Showed pictures of a young, handsome Trump to “awwwws” from the crowd
• Nodded and smiled as Trump bragged about his appearance on Dr. Oz
• Referred to Trump and Putin’s relationship as a “bromance”
• Said that Trump’s campaign has been “exciting and amazing to follow”.

They will be the first with their backs against the wall when the revolution comes, because…

…the wall was poorly made and needs lots of people to prop it up.

THEY WILL BE THE FIRST WITH THEIR BACKS AGAINST THE WALL WHEN THE REVOLUTION COMES!

I’m worried I will be the first with my back against the wall if the Trump revolution happens.

I’m not sure where the rot started, but when you had this gung-ho chorus of enthusiasm behind Dubya’s idiotic, craven, transparent grab for Iraq’s oil because 9/11, and virtually nobody in the press was calling obvious bullshit, it was pretty obvious something was deeply wrong, and that the empire was now officially in decline.

You can’t avoid the gaping maw of oblivion when your torch is busted.

@TobinL will be first with his back against the wall for theoretical crimes against communication infrastructure:

And if by some fluke it doesn't, we'll grind that axe just for the halibut.

They thought that 20km/h was an appropriate speed for a twisty mountain road, and didn’t have the courtesy to briefly pull aside despite the dozen sportsbikes queued up behind them.

Bah. That’s what I get for riding up there on a weekend; on weekdays, the only traffic you get are well-trained locals who wave as you go by.

This topic was automatically closed after 521 days. New replies are no longer allowed.