Well, I say chances are high that Ted Cruz will die utterly unloved and unmourned.

If that’s going to be the case, then there is no reason why Biden shouldn’t use executive power to declassify alot of the shady shit the right wing have done over the years if they’re going to impeach him anyways. Maybe before October at least to give folks plenty of time to dig through it.

I hope the DOJ has something on Trump that will make these idiots’ jaws hit the floor, but I doubt anything would at this point.

On the basis that Trumpadores accuse others of the wickedness that they themselves are perpetrating, I suspect they are also threatening the actions that they themselves most fear. Can Ted Cruz be impeached? Can you impeach a senator? If not, why the hell not? These characters are traitors. They need to be removed as quickly as possible. 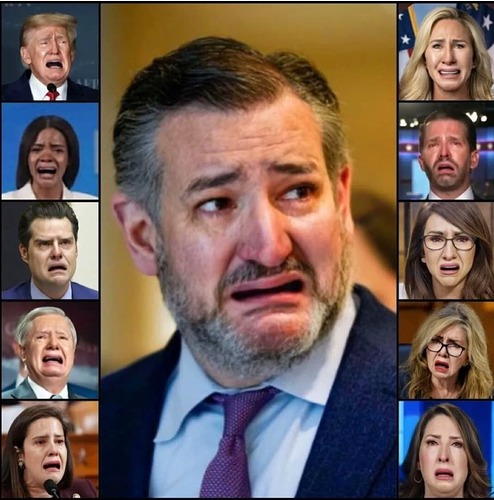 That’s one those images that you can hear isn’t it?

And the animation is so subtle that it’s really hard to catch the movement. /s

"The consequence of the Democrats politicizing impeachment and impeaching Trump twice

Words have lost all meaning.

If Cruz is framing impeachment as a legal process, then he’s sadly making the same basic civics mistake that so many Americans do as well. Canada would once again like to apologize for inflicting this man on you.

Personally, I think chances are high that Ted Cruz enjoys the warmth of pissing in his own jeans.

He already is that and still alive too (lucky us)

Reminder: every single ‘scandal’ that happened in Obama’s presidency was “worse than Watergate” according to these buffoons. The last one, Benghazi, was investigated for more than four years and concluded: no wrongdoing on anyone in the Obama administration or military/intelligence services.

He is proposing show trials to damage them politically even if there’s no evidence of wrongdoing.

Wasting taxpayer money for political gain should be an impeachable offense.

They will never impeach Biden. The last thing the racist/misogynistic GOP wants is President Kamala Harris…and if they impeach her as well, I think Nancy Pelosi then becomes President.

Fortune-Teller, “I see people gathering around you and cheering.”
Ted Cruz, “Really, where am I? The Whitehouse?”
Fortune-teller, “Your funeral.”

Right? Wouldn’t that be awesome if he got impeached and then did the honorable thing that a disgraced* president should do and resign.

Kamala takes her place (and Pelosi Vice President) and then all the wackadoodles will have to come up with a conspiracy that that was the plan all along. They’ll have to admit they were duped by the democrats or admit that, whoopsy, unintended consequences.

*(I don’t think Biden is disgraced)

If President Kamala appoints her, and the Senate passes it. (Let’s see what excuses Mitch comes up with.)

Only the top seat is automatically filled. The rest go through normal process.

If you can’t watch the video, the quote from IMDB:

Elric : As I look at you, Ambasador Mollari, I see a great hand reaching out of the stars. The hand is your hand. And I hear sound; the sounds of billions of people calling your name.

Exactly! I really hope they impanel a special committee to investigate the 2020 election! And if they want to squander a majority on a go-nowhere impeachment, by all means! They’ve demonstrated that when they get the mike they have nothing to say (‘member Trey Gowdy? Yeah, that went nowhere) and then hand it off to Dems who are shockingly well prepared.

This is the same as their weird standoffs over the budget. The public largely blamed them for the credit rating hit and federal employees getting screwed.

He’s throwing red meat to the base … sucking at the teet of victimhood and seething for revenge against their orange god, who Cruz is also trying to placate.