Tell Me Something I Don't Know 013: Rob Liefeld

How to draw feet.

That Captain America shouldn’t have massive boobs.
That thighs are not 70% of a body’s overall length.

How am I supposed to say that, anyway? He probably pronounces it ‘Linoleum’ or something.

Rob Linoleum has no toes. This why he doesn’t draw them. When shown a picture of somebody with toes, he simply said ‘That’s gross’ and went back to sketching with a pen in his mouth.

He also doesn’t have hands. Otherwise he’d use them. And draw them better. When seen in public he sometimes has an assistant hide under his shirt and pretend to be his hands. It’s a very bad job.

Like Rob, all of his characters are designed to tip over as easily as possible. Rob hates weebles.

He hopes to someday un-out the openly gay character ‘Shatterstar’, who he finds offensive because he has sex with other men. Men with toes. Dirty, dirty toes. He plans on giving the character anti-gay therapy and foot surgery. He believes toes make men gay.

He secretly has a pair of flip-flops in his bedroom. He wears them when he’s alone, and wonders what it would be like if he had naughty creases in his feet. Sometimes this makes him sad. More often, angry and unable to draw well.

If you see Rob Linoleum on the street, walk briskly in another direction. That will suffice. Unless you are gay, then show him your toes.

Man I used to love Rob Leifeld. I think because I thought if this guy could make it, I might have a chance too. I remember when he took a hiatus from comics in the early-mid 90s. I thought maybe he was going to take some art classes at a community college and come back able to draw things like hands actually gripping the handle of a gun or sword. Perhaps learn that more pouches isn’t always better. While I have been out of comics for awhile, I have seen some of his newer stuff. It’s amazing how the guy just never got any better. You would think after years of drawing you would slowly learn to draw. I just think he doesn’t care.

But hey - we had fun with New Mutants and X-Force, right, Rob? 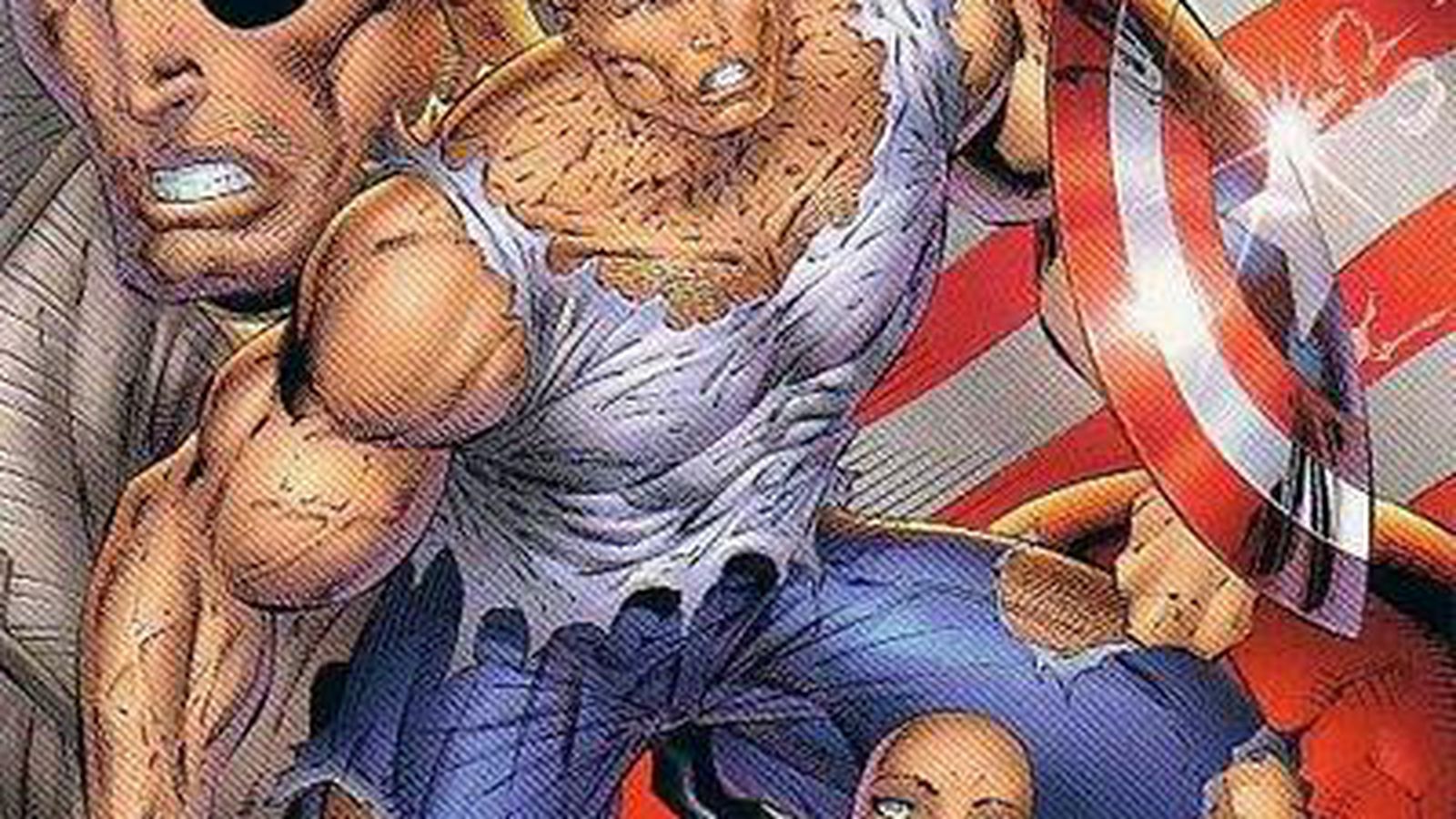 Rob Liefeld has long been derided as one of the worst comic book artists of all time. We take a look at 40 of his worst offenses to the medium.

I only came to this comment thread because I knew there would be funny slams on Liefeld’s many artistic failures. I was not disappointed.

Creator of Deadpool, huh? Fabian Nicieza might have something to say about that. Oh wait, he did: He said that what Rob had “created” was Marv Wolfman’s and George Perez’s Deathstroke from Teen Titans.

Many characters he made were just rip offs of other characters. He made a Captain America rip off so bad that Marvel sued him. Called FIGHTING AMERICAN, the courts ruled he had to change the costume some, and he could never be seen throwing his shield.

He made a Captain America rip off so bad that Marvel sued him. Called FIGHTING AMERICAN

Half true. He didn’t invent the character but he took the existing character and gave him a makeover so he was more like Cpt America. Fighting American was always a Captain America rip-off (co-created by Jack Kirby actually) but Liefeld made him more so.

Fighting American is the title character of a patriotically themed comic book character created in 1954 by the writer-artist team of Joe Simon and Jack Kirby. Published by the Crestwood Publications imprint Prize Comics, it was, contrary to standard industry practices of the time, creator-owned. Harvey Comics published one additional issue in 1966. One final inventoried tale was published in 1989, in a Marvel Comics hardcover collection of all the Fighting American stories. Subsequent publishers ...

All those compository crutches to hide the things he cannot draw (I´m lookig at you, hands and feet), all the ridiculous shit he puts on his characters (pouches, swords, backpacks, kneepads, etc.) to make up for the lack of design. It´s as if someone had pulled me out of my 6th grade classroom in the early 90s, gave me millions of dollars and forced some poor inkers and colourists who hate their lifes and want to die to spend hours polishing up the turds I shit on innocent white paper to a mirror finish.

I knew that he resurrected an old Kirby character, but I thought he did it because it was so similar to Captain America, and then to add the icing to the poorly drawn cake, he added a shield.

The width of one’s shoulders should not be equal to, or greater than, the length of their legs.

The Big Four when it came to ruining comics for me in the 90s.

The thing that bugs me most about the backpacks and pouches is that it totally makes sense for superheroes and adventurers to have a bunch of weird stuff in easily available storage (e.g. the classic utility belt). It should have worked, except that Liefeld’s guys never, ever, ever actually opened any of their pouches, and as often as not they’d have six dozen of the things, none of them larger than a lipstick tube. Maybe they were ammo belts with individual bullet cozies.