Terrible pickup lines from around the world

Ooops…: Not as a pickup line, but as a real, actual question.

I forget where I read that Edward Teller’s daughter was called, by her schoolchums, the Sister of the Atomic Bomb.

Some of these are your typical “Did it hurt? When you fell from heaven?” type joke pick up lines that I refuse to believe anybody actually really uses in a non-ironic way, others are sad and creepy.

My pickup line: don’t have one, because pickup lines are stupid and I’m too shy to approach a girl I don’t know any way so I just hope that either she approaches me, or we get introduced in some other kind of social context.

Personally, I have never used a pick-up line… I just let my hips do the talkin’ and they don’t lie. 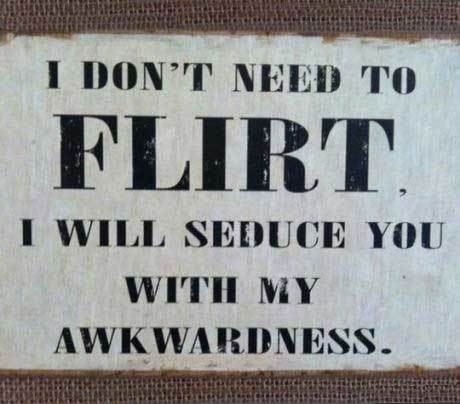 If I did, it would be a gem like these:

How can I know so many hundreds of digits of pi and not the 7 digits of your phone number?
Let’s take each other to the limit to see if we converge

The problem here is that there is no connection between all these, I am pretty embarrassed at how pathetic the pathetic men of the world are at being pathetic I could be much more pathetic than that if I wanted to.

So I guess I will try - first let’s keep with the terrorist angle:

Is your father a terrorist, because you are the Bomb!
Are you a terrorist, because I would like to be part of your network.
If you’re a terrorist I must be with the NSA cause of how heavy I’m scoping you out ( this one is really good because it can also be used with the FBI, the CIA, and a sniper).
Are you a member of ISIS, because you’ve got me losing my head!
Damn, you are extremely dangerous girl. I watch you walk down the street and I scream ASS ASS IN!
If you’re a terrorist how about coming over to my detention facility sometime.

ok, I think that’s all the terrorist action I can handle right now.

My pickup line: don’t have one, because pickup lines are stupid and I’m too shy to approach a girl I don’t know any way so I just hope that either she approaches me, or we get introduced in some other kind of social context.

I’m sure that if I tried one, it would probably come out as
“does your face hurt?”
“…it’s killing me”

is your face alfred hitchcock?
…it’s thrilling me!

I met my current girlfriend when she specifically responded to a line from my online dating profile that said, “Your father smelled of elderberries.”

The best part of that? She totally did not get the reference.

Not saying it’s a good thing to start with, but the lady from Paris talking about the “you have beautiful eyes” line being pathetic really does have very striking eyes.

(of course, the “fallen angel” bit afterwards is pretty silly)

and full of cream?

That paints the cantina scene in a whole new light.

French women are on point! Sorry about the morons in the streets.

Did it hurt when you fell from heaven? , for rebelling against God?

(A Softer World, paraphrased from memory)

So I have to ask. Has anyone here ever used a pickup line?

I’m betting it’s the same class of people who cat-call, of which approximately zero are to be found in a forum around here.

Which leads to the obvious question: When Mr. Beschizza is going “Guys, just stop. Stop.”, just who does he think he’s talking to? Does he think there’s a single reader who doesn’t cringe at how pathetic these lines are? The video is useful to let readers know that this sort of harassment still exists, but Mr. Beschizza’s addition is about as useful as me adding to the end of this article:

Which puppies is he kicking? Men? Are all men the puppies?