Maybe they can do something about the blacked-out plates and ugly aftermarket spoiler.

Unless BMW ups its EV game or puts a high-profile jerk, Tesla may supplant it as the preferred car brand of raging arsehole drivers.

Also, idiots who obscure their license plates are apparently widespread enough that people are fighting back. 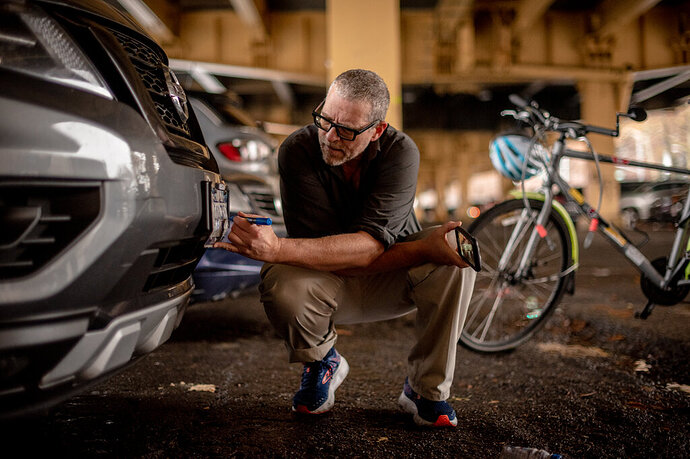 They Dispense Street Justice, One Defaced License Plate at a Time

Scofflaws are tampering with tags, costing New York agencies more than $100 million a year in missed payments and fines. A group of citizen enforcers is coming to the city’s rescue.

I’ve been thinking about getting a dash cam lately…

He must not be proficient in “metal pipe”. Or else he’s using PVC pipe, which is ineffective against car.

Mmmm. Huh? What? Oh, sorry… just daydreaming about how much roadway opened up in front of him and wondering how far I could push the stupid thing while he was out on the pavement…hmmmmm

I assumed as such. That’s not really a covid mask, after all, it’s a bandit mask.

Maybe they can do something about the blacked-out plates

That can’t be legal in CA, can it?

It’s not legal anywhere. But he’s one of the special few for whom the laws don’t apply.

The Tesla was recording too. Can a car be forced to testify against its owner? /s

Maybe they can do something about the blacked-out plates and ugly aftermarket spoiler.

Those dark plate covers are a thing, I don’t know how they’re legal but I see them around a lot. They are tinted, so not 100% opaque.

Aftermarket spoilers. . . people who have to accessorize their cars with shit to make them “look cool” are just so ridiculous. My favorite is drivers who see those blue and red “M3” stripes on BMW grilles and buy colored tape to put the same stripes on their. . . Honda

Tesla doesn’t have any automated defenses?

I think it already did. Most of speeding assholes in my neck of woods are Tesla drivers.

My favorite is drivers who see those blue and red “M3 ” stripes on BMW grilles and buy colored tape to put the same stripes on their. . . Honda

That’s a great way to trolley the M3 jerks! I should do that to my 3 decade old Corolla.

Tesla doesn’t have any automated defenses?

A few in my hood make an clicking sound when you walk past them. I’m assuming it’s the camera covers opening.

I bought a used car that had tinted front driver and passenger side windows and they didn’t install the front license plate (CA). Otherwise it was a generic sedan.

Within a week of driving it I got a fix it ticket from CHP because of those issues and had to get the tinting removed.

So I get super annoyed constantly seeing super modded up, loud, blacked out window, tinted license plate covered muscle cars that never seem to get pinged for the same fscking issues, especially when they drive like selfish assholes.

(Probably because they being driven by the off-duty cop that gave me the fix it ticket.)

I wonder how long it will be before this guy gets shot?

It’s incredibly difficult to hit a moving target and incredibly easy to hit a passerby, I’d rather not buy in to the myth of the good person with a gun.

The Tesla was recording too. Can a car be forced to testify against its owner? /squote

My neighbor had a Tesla and the car kept opening his electronic gate on it’s own. He brought the Tesla in to the dealer to figure out what was up and they immediately pulled up every detail about the car’s movements, dates, locations and times.

My neighbor sold the Tesla right then and there for a hefty profit. (This was before the twit’s Twitter purchase.)

CHiPS just needs to grease musk’s palm to easily get the info on who’s car that is.

I’d rather not buy in to the myth of the good person with a gun.

This is why I classified them as “asshole”.