It’s a sobering thought that, between Greg Abbott and Dan Patrick, Abbott shines out far and away as the “smart” one.

I’m assuming this is him playing the religion card because he is absolutely aware that once he is no longer Lt Governor the oddly-stalled cases against him will start up and he’s hoping to get a few more voters out there to save him?

The Abrahamic god is, yes. Gaslighting, abusive, strick-father-type, too.

@petzl: neither are in contention for winning the Jeopardy Tournament of Champions.

No apology necessary. I also think it’s gross.
I also don’t get it. I mean, she’s been SUPER religious her whole life in all the most weird ways, but also very kind and considerate, etc… I have to be honest, given what complete degenerate Trump is, I was a little shocked that she was a fan. My dad (her brother) pretty much stopped talking to her, particularly when he started getting bombarded with crazy conspiracy emails. I think he told me back in early 2021 that she even went so far as to tell him that Trump was really still president…
So… yea.

Jesus, “Stop it, just stop it, your orange sack of shit!” 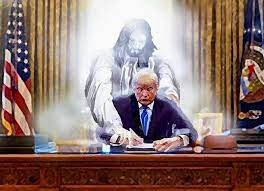 God needs to do some better vetting of Their local franchise operators.

In a speech he delivered at the Christofacist CPAC conference, Patrick said, “We were a nation founded upon not the words of our founders, but the words of God because He wrote the Constitution.”

See the lunatic fuckery we gotta put up with?
And he’s not even from here! He’s from Baltimore, IIRC.
He used to be a sportscaster, then was a failed sports bar/restaurant owner. After that, he bought a small radio station & became an El Rushbo clone.

Why didn’t he kill himself for the economy?

Oh, that didn’t apply to him, of course, but funny you should ask…
Dan Patrick’s mental health issues go way back.

He is a Dominionist, along with his smarmy cohort, Cancun Cruz.

You are thinking of Ken Paxton, the Attorney General. He is also up for re-election, along with the other members [Abbott & Patrick] of the criminal Troika that have been ruling Texas for far too long.

I hope they get crushed at the polls, come November.

"I think what God meant to say was… "

I’m surprised he didn’t say Jesus was from Texas.

Cultural/ingroup signaling, his literal belief isn’t that relevant to what this means

Except this brings up the question: He couldn’t get it right the first time?

Exactly why this is blasphemy, especially if he subscribes to inerrancy.

That explains all the typographical errors.

This couldn’t possibly be true! Everyone knows that God wrote the KJV, and the tone and vocabulary of that are significantly different from those of the Constitution!

For the love of Mike…

Remember when God was super obsessed with franking for like a week?

Remember when God called out high crimes and misdemeanors?

Remember when God forgot completely to put his name or any reference to himself in the Constitution?

Remember when God thought slaves were 3/5 of a person and women couldn’t vote?

What a dumb sack of sh**, going to be shocked to find himself in the pits of Hell for being a blasphemous hypocrite.

Remember when God thought slaves were 3/5 of a person and women (and poor folks) couldn’t vote?

God is an American, according to Texas Lieutenant Governor Dan Patrick

Clearly he is wrong. Everyone with any sense knows that God is a Yorkshireman.

even genesis can’t figure itself out [1]: first god creates plants, animals, and lastly people. later: it’s one person, then plants and animals, and ends by dividing people into sexes. ( really even the gods are different: elohim vs yahweh.) and that’s all before peter gabriel quit the band [2] .

how can anybody trust something that wishywashy?

The thing is, what we think of as seven days were seven merge requests from the dev team. The seventh day was the sprint review and retrospective.

Forgive my programmer humor. It was a hard scrum sprint at work.

Editing to add that Dan Patrick is like Deacon Vorbis from Terry Pratchett’s novel Small Gods: his mind is a closed steel trap, nothing gets in or out, and the only voice of God he hears is his own thoughts reflecting off of his impenetrable skull.