Chaplin. No a between the l and the i.

A few too many peanuts in his pad thai, if you know what I mean.

It’s funny, but for some reason I find the non-Thai version somewhat ironic, too: 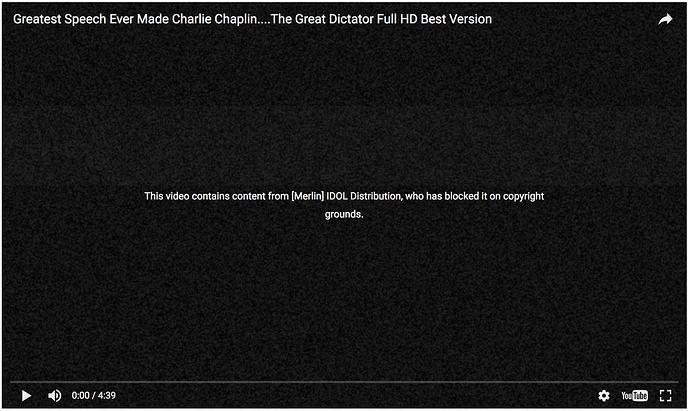 What a dumbass. When everyone knows that a movie satirizes Hitler; why would you do anything to suggest that you see some of yourself in the character?

And this also gives credibility to the movie… Streisand Effect.

He may not be visiting us in Munich that much any more, either. We now know what he looks like, and his weird clothing choices. He’s getting more attention, but on the other hand we like our weirdos here in the city.

The King is mad, Mad I say.

Perhaps his Excellency has been referring to the Jewish question?
(Surely one of the greatest movie scenes)

/sigh/ The king, as a person, is most likely not at all (not even remotely) involved in this. As an institution, he is - through others interpreting his will.

Everyone, I suggest you read Pyramids (again).

It’s almost exactly like that. Only that Thailand is a bit more humid. And even the greatest mathematician cannot help in this version.

Cory, it might be worth discussing who benefits from these actions. Not just bashing “the king”. I’m dead serious about that, because it’s not at all unlikely that a strongman like Duterte emerges, either from the military, or the exiled opposition. If that happens, there will be far more serious consequences than a Schtonk not given about seriously antiquated laws. And I’m talking about political and social stability in the whole area, not just it’s economically most important country.

So a dude gets mad about one of the best silent era actors making a ww2 propagand film.

More BoingBoing headline clickbait. I am the last person to defend the King, but whoever wrote the headline is just making things worse. I talked to a friend last night who is in political exile who also agreed that the focus should be on the Junta, not the King. And for those of you in the States who are acting self-righteous about this, the US Military has provided the country military aid and has conducted joint-military exercises before during and after all of the Coups. My apartment had a beautiful view of a runway where the full volume of C-130’s and Worthogs (the upgraded American ones not the propjet military surplus that the Thai airforce uses) woke me many a morning. I’ve gotten drunk with American cobra and X16 pilots in Korat and Ubon Ratchanthani on several occasions who were not shy about talking about the exercises. America could put a lot of pressure on Thailand if it wanted to. But the car plants and hard disk factories are more important than democracy and human rights.

That may be true, but I can say “tRump licks balls, as does every general at the Pentagon!”, without hiding under my bed. And, from what I hear, they do.

The King is mad, Mad I say.

And remember people: this is why you do not rock your child to sleep near a wall.

Veteran journalist Pravit Rojanaphruk‏ wrote on Twitter that the junta’s order is “hilariously insane and dictatorial.”

I think that, in this case, humour is tragedy plus distance.

That may be true, but I can say “tRump licks balls, as does every general at the Pentagon!”, without hiding under my bed. And, from what I hear, they do.

Which would be a fantastic counter-argument if @deerpig’s argument had been “Thailand is better or more free than the U.S.A.”. But it wasn’t. What i understand them to be saying (with some editorial from me in these same italics) is that we are blaming the wrong people for this. The king isn’t the one who demanded this (and in fact is probably being used as a distraction by those currently in power), it was the most recent coup winners. And as an aside that the U.S. government has been giving the multiple iterations of military might backed “governments” of Thailand military assistance.