The Bathgate Ratchet, a clicky, machined fidget-toy that works like a socket wrench

You would think they would just cover shipping for that price.

I think the clientele he has aren’t terribly worried about cost, especially considering the very limited availability of items produced per design. “If you have to ask you can’t afford it” and such.

This is my destination for all my breaking fidget news.

Man, you could get yourself smacked playing with that in public. Annoying!

I do love his stuff but doubt I’ll ever be in a financial position to buy one. I subscribed to his mailing list hoping to hear about an exhibition (which I think he has done before) but so far I’m not aware of any shows being announced.

His pieces are interesting, i think i would be able to appreciate it more if i could see them in person as well. Certainly not going to drop a grand on one though.

Got kind of a hand grenade kinda vibe to them, don’t they?

And yeah. I’d love one, but they’re waaaay too expensive for me…

Someone get those aliexpress clone lathes on the phone, stat!!!

I can definitely see that, though high-tech enough that I’d expect it to show up stabilizing/generating the plasma sheath/treknobabble phasic shield disrupter; not just a good 'ol Terran housecleaning model.

Or as a little levitating robot sidekick that contributed handy scanning capabilities and a surprising expressive range of assorted commentary bleeps.

Given my inability to afford this one(“hey, did that paperweight cost a month’s rent? No, um, definitely not; it was more than that…”) I sympathize with the sentiment; but it seems like kind of a mean thing to wish on the artist. Plus, this is definitely the sort of device where the slightest fit-and-finish inadequacy would drive you to madness every time you picked it up.

this is definitely the sort of device where the slightest fit-and-finish inadequacy would drive you to madness every time you picked it up.

Given that the top and bottom of the shaft don’t line up, indicating a threading misalignment, I’m not sure that people will turn up their nose just for fit and finish reasons.

He’s found a niche, created a piece of art, created scarcity, and marketed it well enough. Further he’s moving to new projects at a quick pace. So even when someone duplicates some aspect of one of his works, it won’t have any real impact on him, unless he chooses to do a re-release down the road.

That said, I’m sure he’s already using CNC machines, but my guess is he’s still walking the parts back and forth between a few machines and spending time doing setup. While expensive, a swiss type lathe CNC machine could very nearly create each part in one operation:

This would leave time for him to design the objects, rather than taking months fulfilling orders for a precision item, he’d let the machine do it, perform final assembly, and move on to the next project. Alternately, at this price, he could farm out production to other machinists (like he farms out anodizing).

The reality, though, is that he’s a machinist, and enjoys that aspect of it.

So what you’re really spending $900 for is a piece of him. His design, his time, his care. Whether it’s worth it for you is entirely up to you, but if all you’re after is the final object, wait awhile, someone will clone it, and you’ll have exactly as much of him as you’re willing to pay.

Take a look at his process and you’ll find he’s still using hobbyist CNC machines, and spending a lot of time doing work that could be automated. Hopefully these later works allow him to purchase a better machine.

That said, this thing is huge. I enjoy weighty fidget toys (the Element Blocks on my desk were worth it to me) but I’d prefer a heavy, smaller version. Further I worry that the center shaft is aluminum - if so the ratchet action will ultimately dull as it’s used. Hopefully it’s stainless steel.

If i recall correctly from past updates the artist has posted, he does not use CNC machines. I could be wrong but then again not being a machinist most of this goes over my head.

It would surprise me if he didn’t, particularly since his process includes hobby CNC machines: 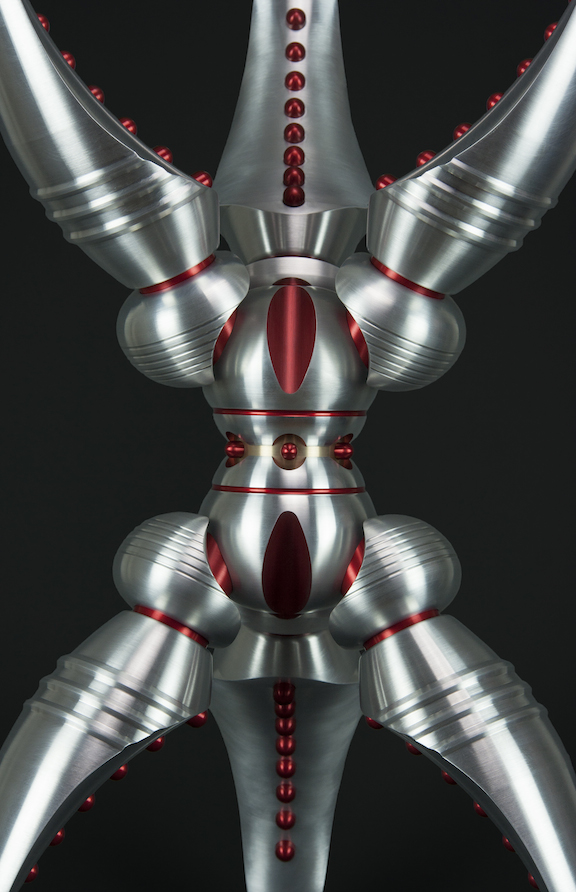 Given that he’s making a hundred of these things, and it would take days* to hand machine each one, it just doesn’t seem reasonable to do it by hand.

*A good machinist would be faster, but even then I count at least 5 machined parts, each part requiring both lathe and milling operations on both sides, so around 20 setup operations, per part. Then each setup would allow machining, and there are several machining operations per setup. So this may require 60-100 individual machining processes, each one requiring use of a digital readout and pages of information about where to make a cut, how deep, angles, etc.

If he did use CNC machines i don’t think i would view him differently than if he did it by hand. It’s good workmanship either way.

Absolutely. His work, done via CNC or by hand, is exceptional.

It’s worth taking a look at his other work: