It’s also worth checking out this short article about Dr. Donna Nelson, who is the chemistry advisor to Breaking Bad’s writers. 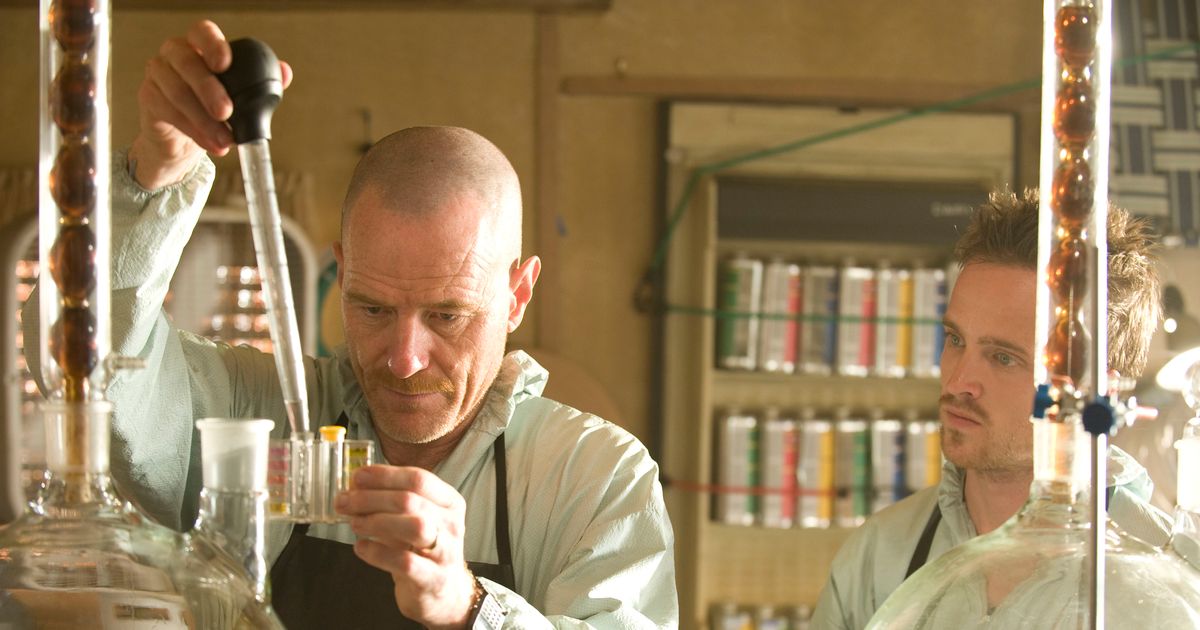 Except for the blue meth.

It’s not like Walt is just a high school chemistry teacher. In the first episode about 5 minutes in, there’s a shot of an award on his wall that says

Again with these afraid-to-tell-all “science” stories. Christ, a lack of easily accessible documentation on synths isn’t what’s keeping scores of potential cooks from going into the meth game - if that’s the road someone wants to take, they’re taking it, legality and safety be damned.

Keeping people from making illegal drugs is the job of law enforcement. Not scientists. Not reporters.

What does omitting the words “phenylacetic acid” from this article - a chemical already named on the show - accomplish other than forwarding the efforts of cowardly journalism?

It’s common practice, in a show of this sort, to deliberately fudge the chemistry a bit to avoid liability (legal or moral)… just as spy shows never show actual lockpicking, and so on, and on.

I had a high school chem teacher who would gladly explain how to make LSD – almost. And he’d warn you that the “almost” was likely to kill you if you tried following those instructions in real life, so DON’T. If you were clever enough to debug it, you were clever enough to have found out elsewhere. If you weren’t, he was teaching organic synthesis with an engaging example but drawing a not-unreasonable line in the sand.

There are people I’ve refused to teach locksmithing because I didn’t trust them not to abuse the skills. They may learn elsewhere, but I don’t want them on my conscience.

More likely is the show doesn’t want it to be TOO educational. Like the South Park underwear gnomes skipping right to the “Profit!” step.

Mythbusters does the same thing and it bugs me. They had their Breaking Bad special and were trying to recreate the bathtub body disposal scene. Turned out the acid used on the show didn’t do much, so they tried with sulphuric acid (which they identified) and what they were calling secret sauce. A quick search finds a thread on Reddit identifying it as hydrogen peroxide. So I guess that stopped everyone who watched the show but doesn’t have internet access.

I see it as a dumbass filter. If you have someone who is such a dumbass that he’s going to go play with H2SO4 and H2O2 just because he sees it on TV, then the tiny step of bleeping it out of the show will be sufficient.

Of course the show never explains why a high school needs several gallon jugs of HF.

Someome, some day, has to come up with a practical use for xenon tetrafluoride…

That, for me, is where Breaking Bad really fudges the facts. Unless New Mexico really does have one hell of a school system. When I was in high school thirty of us had to cluster around our teacher while she put a piece of sodium the size of a pinhead in a petri dish to demonstrate what happens when you put an alkali metal in water.

It could be that the school system bought it a while back and it’s been sitting in storage for decades because having a teacher demonstrate something involving acid would be madness. Letting the students use it for anything would be grounds to fire everyone involved. And disposing of it would cost money, so leave it in the storage room.

That makes sense, although I was also thinking more broadly of the equipment Walt steals from the storage room in season one (which sadly results in an innocent janitor being fired). Full face respirators? Five-thousand milliliter boiling flasks? My chemistry teacher had to use a petri dish because that was pretty much all the glassware she had.

I can accept the possibility that the school where Walt teaches really is well-funded enough that they can afford equipment I didn’t even see in college. The show is so great that I’m happy to suspend my disbelief in this one pretty insignificant area. But is it really realistic?

I’m trying to remember what I saw in the storeroom in high school. This was in Ontario, so it may have been funded properly at some point. I can’t remember any 5 Liter flasks specifically, but there could have easily been some there. There was all kinds of crazy shit in that room. Chemicals that the teachers wouldn’t dare use, tons of glassware, a Van der Graaf Generator that for some reason they had no problem using on students (lightning bolts being shot out of your fingers is pretty cool).

It could also be that Walt or someone else at the school had a contact with someone at Los Alamos or some other lab and got some surplus gear donated.

Maybe there was an anonymous donation to the school from some semi-local guilty feeling billionaires?

The equipment didn’t bother me as much as the massive quantities of incredibly nasty chemicals they apparently had on hand. It’s hard to imagine a scenario where a public high school student is allowed to run a lab with Hydrofluoric Acid. A simple splash on the skin is potentially deadly with that stuff.

“Ok class, for today’s lab we are going to do a reduction on dimethyl cadmium. Open your lab books to page 72 and begin. And Fred, spit out that gum.”

That Walt had a contact who donated some surplus gear seems completely reasonable, and, given his background, even pretty likely. That was a possibility I hadn’t thought of.

There were only a few times I went into one of my school science classroom storerooms. I guess I went to some pretty poorly funded schools, since they were mostly only used to store board games, extra chairs, and a few odds and ends. Although there was the time my science teacher came to class drunk and some students locked her in the storeroom. I’m pretty sure she never noticed she was being stored in there.

It’s probably a liability thing and an optics thing. You don’t want to be seen as giving a tutorial for making meth, because that would somehow be approving of something illegal and dangerous. Someone probably claimed to have found out how to do something dangerous from a science show 20 years ago, got hurt while doing it, successfully sued the show, and now everyone who is a big enough deal to have a legal department has to be paranoid (just like the “caution: HOT” labels on coffee).

Exactly, the article doesn’t seem to consider that the writers/consultants might have come up with a process that Won’t create a powerful and almost pure substance, so they can’t be accused of teaching the world how to cook meth. Even the use of highly controlled (in the USA) substances might lead to someone in another country who has access to it causing all kinds of havoc