The Choco Taco is dead

Originally published at: The Choco Taco is dead | Boing Boing

Despite having eaten maybe 3 of these in my entire life, I am saddened and want one now. I mean… I did enjoy those 3 that I had.

Me, too! I wasn’t a fanatic for them, but just knowing they were available if I ever wanted a fold of sugar cone wrapped around ice cream then dipped in chocolate was a comfort in this tumultuous world.
Kind of like knowing those pink “sno-balls” still exist at gas stations nationwide, though I don’t foresee eating one ever again.
I want to know I could. 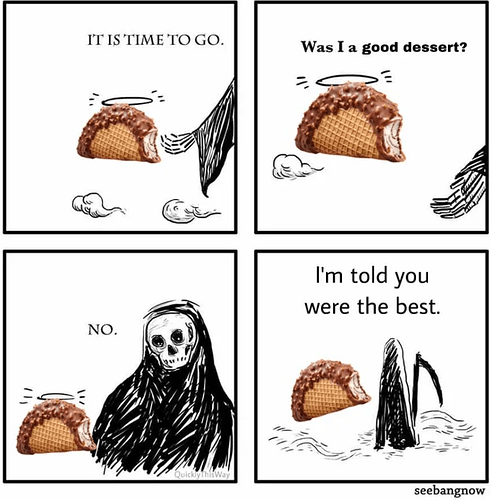 Finally, somebody gave us a ramen. Hallelujah.

Man, I’ve been looking for Choco Tacos for months every time I’ve gone to the store, I wondered what was up. Sad to hear, this was one of my favorite treats growing up, almost every time the ice cream truck would come around, this is what I’d get. Hopefully they’ll revive it one day, if distribution ever recovers.

Too soon… too soon…

In a few months, the fanfare around the reintroduction of the Choco Taco (“I scream, you scream—and we listened!”) will be over the top, as will the demand.

cynical me is hoping this is a marketing ploy. the announcement will cause an outcry, and then will bring it back with a big flourish, and joy will reverberate across the land.

thanks. heading out to buy a sno ball. damn it.

I’ve never had a choco taco, doubt I’d like it. From videos I’ve seen online the waffer for it wasn’t crunchy and seemed messy to eat. But then again like i said, I’ve never had it.

Either way it does seem crazy that they’re dropping a fairly well known product to meet demand elsewhere. I guess no one was buying it?

cynical me is hoping this is a marketing ploy. the announcement will cause an outcry, and then will bring it back with a big flourish, and joy will reverberate across the land.

Twinkies being discontinued in 2012 made a huge amount of news at the time, but they came back.

And now it seems like they’re intentionally trying to kill the brand again. There’s no other explanation for this abomination:

Instead of a celebrating a landmark anniversary, I mourn. RIP delicious friend.

From the other side of the aisle- the ratio of choco, icecream, wafer, and nuts are more evenly distributed than a Drumstick (as long as you don’t mind the softer shell).

Much like a Klondike or candy bar, lowering the wrapper as you go will decrease messiness.

Decades of protest at it’s discontinuation have yet to return the sublime mandarin chocolate sorbet to the Baskin Robbins production lineup. I’ve tried multiple times to recreate it at home, sometimes getting close, but no cigar.

And the BLM shall weep. 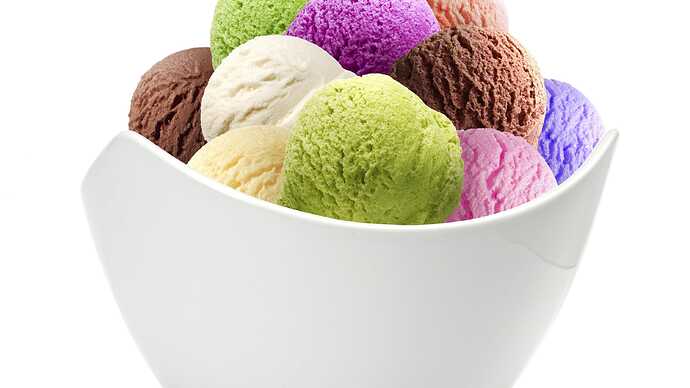 For me it’s all about getting that delicious crunchy waffer, so cones are my jam

As someone who thinks that the flavor of the wooden stick always ruins the frozen-treat-on-a-stick experience, I mourn the passing of the Choco Taco. I enjoy its tough, chewy shell, and will miss having this stickless option. But, like others here, I confess can’t remember the last time I ate one.

No word on the state of the Chocodile, though I think it still has a bright future. 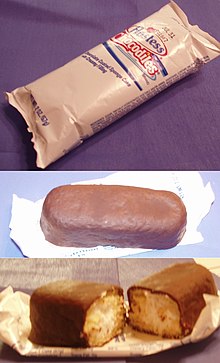 Chocodile Twinkies /ˈtʃɒkoʊdaɪl/ are a confection created by the Hostess Brands company. The confection was known only as Chocodiles prior to 2014. The package describes the snack cake as a "chocolate coated sponge cake with creamy filling." The Chocodile is Twinkie-shaped and sold in packages of two. The Chocodiles mascot was formerly Chauncey Chocodile, but Hostess has removed him from packaging and their website in recent years. Since the late 1990s, Chocodiles have no longer been sold on the...