The Dune in our Heads

I haven’t read that one, so I have no idea how manic behavior, pink smoke, and a piano relate to the transformation into a sandworm. Spice Agony?

No, I thought you were referring to the wormcat image. Sorry about the mixup.

How come we never have threads devoted to the prequel serieses? Kevin J. Anderson deserves as much respect as homepoathic medicine and fringe science get around here!

I’d like to join in making fun of them but I haven’t actually read them. Plus I actually enjoyed books 5 and 6 so my opinions aren’t to be trusted.

I loved the political intrigue of it when I first read it as a kid in the 70s. A great aunt of mine had sent a box with Tolkien’s books and Dune for Xmas. The next year she sent a box set of Heinlein. I miss Aunt Merion.

I made the mistake of reading one of the prequels “written” by his son. Don’t do it. Don’t even be tempted to do it. The horror…

If by 5 and 6 you mean Heretics and Chapterhouse, well DAMN! Those are as good as, and in some ways better, than any of the other books. I felt a connection with those characters and really cared about what happened. Chapterhouse is on my nightstand and when I want to relax before bed I open it to just about any spot and enjoy a few chapters. As one of the great science fiction writers his vehicle was sci-fi, but his writing was far beyond just sci-fi.

The Jadorowsky version would have been a gloriously trippy experience & totally wrong!

The Lynch version? I began cringing at the opening credits which showed Fremen marching in lock-step along sand dunes; they might as well have planted a thumper to attract a Sandworm. If you hadn’t read the book, it was a confusing mess. I had read the book & was annoyed at the cavalierly they changed the story.

None of the adaptations have been much good IMO, so perhaps like Jadorowsky’s version, they should never have been made either. Best they stay in our imaginations.

Antinous would have been proud…

Heh. Not seen that in a while.

You’re being far too kind to him…

The fact it renders you unconscious is telling though, no? 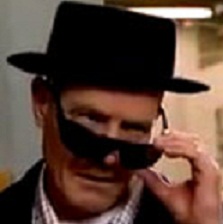 should I read your review? really? I’ll get right on it as soon as I finish this batch of meth. promise.

Isn’t it from Reefer Madness? Seems right (both my guess at the reference, and the fact that the people working on the Jodorowsky movie were obviously smoking AMAZING drugs)

That’s exactly what I was going for. These people were higher than Kevin Smith, except he actually got his insane movie made (man sews another man into a walrus costume and forces him to act like a walrus).

Allegedly those prequels were based on Frank’s notes. If so, if the resolution of the prequel series was based entirely on his notes…I want to dig up Frank Herbert and slap him with a large trout.

I had read Anderson before, sadly. Apparently he’s a successful author (he’s been published several times, at least) but I’d been lulled by Timothy Zahn’s Star Wars trilogy into thinking these SW franchise novels could be pretty decent, and then read Anderson next. I…uh…to say something nice, I thought the story was imaginative. The dialogue was in Episode I territory.

I know, right? I bought a book of his by mistake once. I keep it as a Terrible Warning.

Not trying to offend anyone. I just really enjoy Jodorowsky as a person and fellow filmmaker, and I respect his works. Really love El Topo, Holy Mountain and Santos Sangre. Watching DUNE was very inspirational and since I write reviews via my production company, 1931 Productions,(http://1931productions.com/post/80598455120/the-best-movie-youll-never-see) I wrote one for DUNE as well. Just trying to get the word out about my production company and this amazing film. Didn’t mean to offend you, apologies!

Yep, just goes to show, Dune wasn’t great just because the characters and story lines Herbert put together, but also because of the actual writing. I found that one prequel to be some of the worst writing ever. It was just a bunch of (barely) two dimensional characters following some horrible predictable story lines. I looked up the “co-author” and well, he is prolific to say the least. Or the most. Quantity over quality for sure. I will admit that when I first read Dune, I was young enough for some of the deeper material to go over my head. But I can still reread it because that depth is there.