Here is the full, unedited version of the aftermath of the chokehold and medical emergency, without all the commentary and news channel fluff (NSFW/NSFL obviously):

EDIT: As there seems to be a lot of rabble about posting videos of Eric Garner’s unjust death, talks of “snuff films” and decency, I will point to funruly’s comment below.

He had a heart attack? I thought it was the chokehold, that killed him. How come his death was ruled a homicide?

I thought it was the chokehold, that killed him. How come his death was ruled a homicide?

No BoingBoing, i don’t want to see a video of a man die. Let’s just start posting snuff films while we’re at it. If you think the video is relevant then give me a description of the video along with some commentary, i don’t need to see a death on film in order to get the point.

The video doesn’t show his death, he died at the hospital. The video shows a man in obvious medical distress, surrounded by public officials trained in first aid who don’t render assistance.

The little wave to the camera from the cop who killed him tops it off.

I wonder if the grand jury got to see that part.

Well the title implies he dies in this video and i didn’t want to watch it to make sure. But that still doesn’t change much, it’s a video of a man dying, rather than of his ultimate death. I really don’t need to see that, the news of the injustice this man was served is disturbing enough.
I realize i’m being sensitive to the video but why post minimal commentary on it? Just give me the salient information rather than ask me to watch it.

Even if the video did show his death, a lot of other readers would be honored to bear witness to this man’s horrific, unjust, and all too outrageously typical death.

So give a link to the video for those people. But I also would prefer some kind of detail on what to expect before I choose to watch.

perhaps if they were to give you some warning, like describing it as “even more disturbing” than the other Eric Garner video, then at least you’d have some hint

I wrote that in consideration of people that might want to know what the video is without having to watch it. But you know, whatever, watch it if you want to.

Yeah, or at least some form of video-embedding that requires the user to actually click on what they want to watch, instead of mind-controlling our hands to do it against our will.

That explains why my clicking hand is going on a murderous rampage. I had to cut it off and throw it in the freezer.

So, finally at home where I can actually watch the video:

The MSNBC linked piece has an interview at the end, in which the wave to the camera thing is discussed.

The interviewee says (paraphrased): the city has already paid out 3 settlements for violence inflicted by Pantaleo.

That’s something that would have come out at a proper trial, one where there was an adversarial relationship between the prosecution and the defense.

The little “hi mom” wave at the end? That would have been the last thing the jury saw in the prosecution’s closing argument.

But there won’t be a trial, because the person who presented the case to the grand jury was acting more like a defense attorney than someone who wanted to get an indictment.

Nope, the title does not imply that and you need to click the video to see it and I assume your an adult and therefore you can choose to not click it!

The video shows a load of shitty cops being particularly bovine in their response to a man in distress. They cannot respond to him as a person due to institutionalised methods of treating anyone who has become a “suspect”

It’s just one more horrible insult, one more blow in beating into us that “cops are better than mere citizens.”

Once you have been harmed by a cop, rendered unable to resist (if that’s what you were doing in the first place…) count on being restrained for hours, even if that restraint interferes with medical personnel being able to treat your wounds or save your life.

Since there seems to be some confusion as to why this video may be useful, I developed a use case for it. 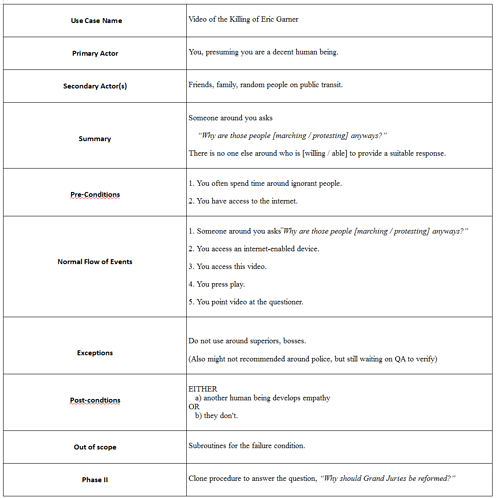 Do it again with stick figures. I can’t follow this.