Disco Stu is a camera guy?

The California sun is the greatest practical effect.

I suppose there are several elaborate explanations for why the Death Star (and Star Destroyers, for that matter) are covered with so many structures and knobby things instead of being smooth?

As ships of the Imperial Fleet and thus an extension of the emperor himself, surfaces must represent as close as possible that which they are a part of. 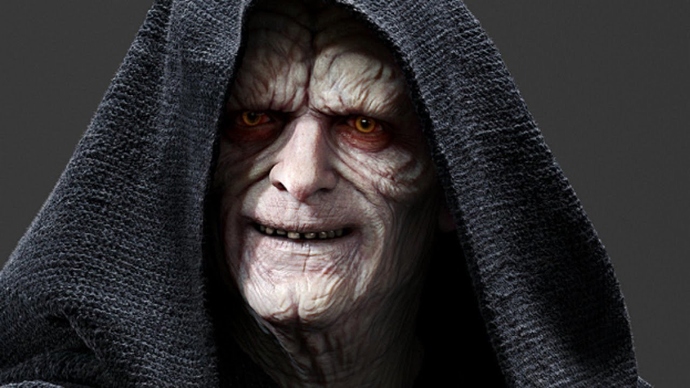 Man, I’d love to 3D print some of those modules for a backdrop at home.

I suppose there are several elaborate explanations for why the Death Star (and Star Destroyers, for that matter) are covered with so many structures and knobby things instead of being smooth?

I think it’s a way of giving detail. If you look at a lot of the model-based ships and planets before Star Wars, their model-ness was fairly apparent, even when they were very good and detailed models like the original Enterprise. The industrial barnacles serve a dual purpose. They make the universe look more lived in, rebuilt and repaired, and they distract the eye from the fact that it’s looking, through a trick of perspective, at something much smaller than life-sized, especially when, as in more of the space battle scenes, the camera is speeding past all the big structures’ detail which makes it look even more detailed.

Technically, this is pre-ILM when everyone/thing was based out of Apogee Studios on Valjean Ave. in Van Nuys. Apogee was one of the last ‘do everything’ FX houses in LA. and gave a lot of people their start in the business.

Even today, this is so cool! CGI is for sissies, get me my Testors glue!

[quote=“GulliverFoyle, post:8, topic:84092”]They make the universe look more lived in, rebuilt and repaired[/quote]Aesthetics aside, I was particularly pondering in-universe explanations. Like, maybe all the ships and so on are actually centuries old, or they’re maintained by teeming masses of unseen subservient droids that are incapable of collaborating to a degree that would produce large-scale uniformity. (Ooh, that sounds pretty good.)

Like, maybe all the ships and so on are actually centuries old,

I think this is something that’s actually mentioned in a lot of the non-canon stuff. Like the Millennium Falcon is supposed to be named for it’s thousand-year useful life-span and has had numerous owners before Hans won it. I think Lucas was going to the idea that the Imperial Era was a time of darkness and decay, when people fell back on old reliable “junk”. But you’ll notice Cloud City is slightly shiner and svelter than a lot of the other architecture, at least in the non-service areas, and this probably gives us a glimpse of the Old Republic when people could afford to keep up appearances on their mega-structure real estate.

The only reason I don’t see that working for the Death Star and the Star Destroyers is because those are supposed to be relatively new construction. Maybe they shot or fired all the bougy architects like in the Chinese Cultural Revolution?

My problem with in-universe explainations. Is that they limit where the story can go for the rest of the franchise. Like in Star Trek when they tried to retcon klingons’ bumpy foreheads against TOS. Ugh!

True enough, but it can be amusing to gaze upon some of the contortions the Star Wars fanbase has assembled over the decades, where everything that’s appeared on-screen and out-of-focus for a single frame seems to have been weighted with history.

Did they go beyond “We don’t like to talk about it?”

In Enterprise, the Klingons inadvertently created a killer virus while attempting to make a super-soldier. They kidnapped Phlox to work on a cure, which he made using human DNA. This flattened the Klingon’s ridges until they developed a cure for the cure, conveniently sometime between TOS and TNG.

There’s no friction in space, so there’s no physics-based requirement for smoothness or sleekness. Something blocky as fuck will fly just as fast as a the same mass in a perfect teardrop shape, as long as you give it the same energy.

See: every actual spaceship ever.

That might work if you’re planning to never ever enter a dense cloud of arbitrary space garbage, or an atmosphere. Vger would have a hard time “landing” anywhere survivable by humans. Outer space isn’t a perfect vacuum, there’s all kinds of wrecked dumptrucks shitting up the place.

Yeah, but now you’re talking about armour, not sleekness.

I have a difficult time imagining the planet a Star Destroyer, or the Death Star, would be landing on, or the atmosphere either would be transiting.

Why would a Death Star land on anything?

If JJ put me in charge of the next movie there would be a whole thing about “this is not a star, it’s more like a Death Tiny Moon”