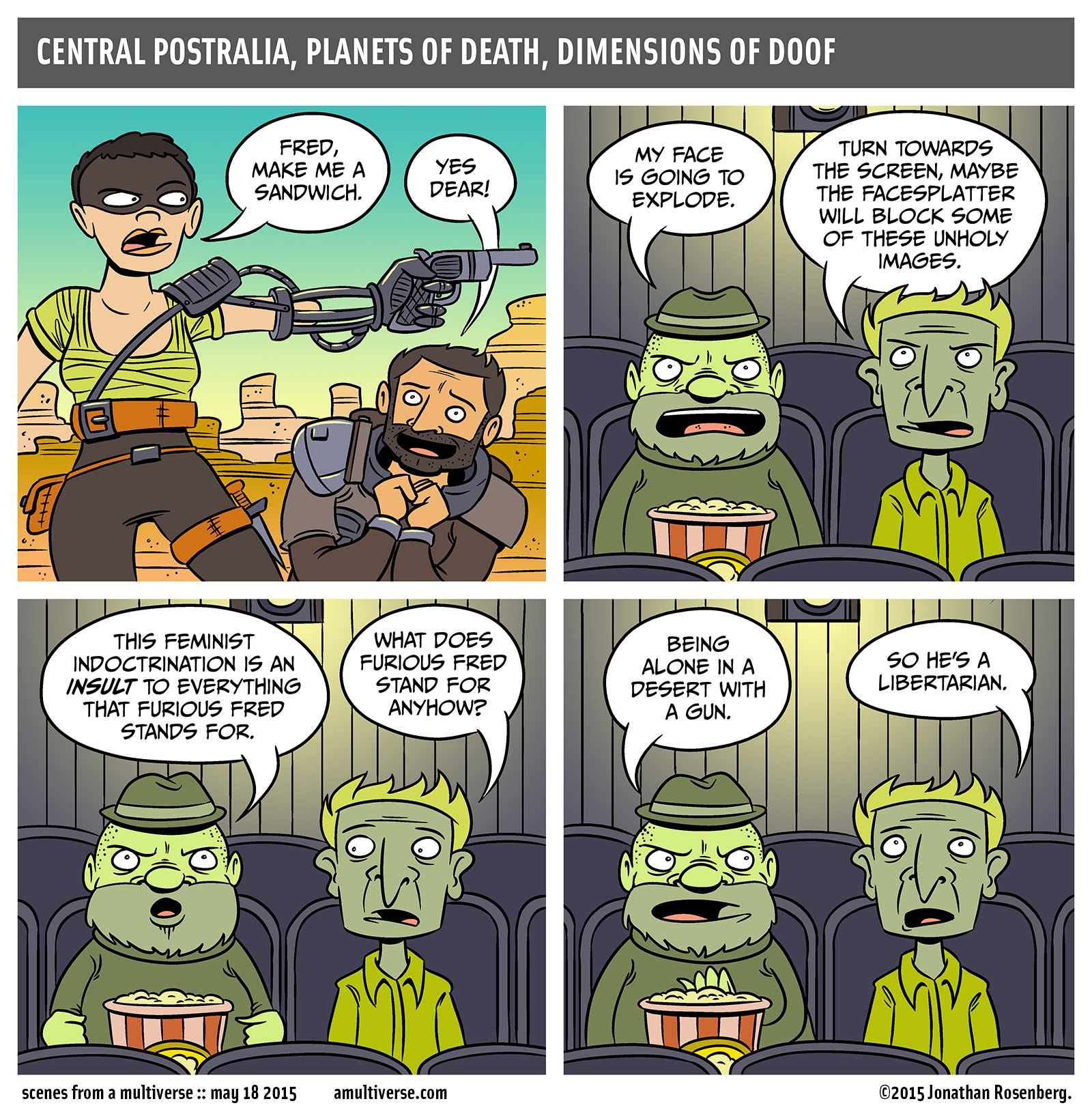 Mad Max has never been about feminism! Unless you count the Warrior Woman from Road Warrrior or Aunty Entity from Beyond Thunderdome or… What? You’re not interested in concrete examples…

This review (a blog-post in Zambia) actually has a concussion:

What ever happened to The Feral Kid?

The gf didn’t want to do the 3D thing, so I googled up the biggest screen I could find where it was showing in 2D (23m), and we went along last night.

Totally gobsmacked. Ima have to get along to the 32m IMAX and see it in 3D as well like I meant to in the first place.

Yeah, it’s the first movie I’ve seen since Avatar that actually benefits from 3D, especially if you can get to a crisp, bright IMAX 3D projection. Unlike Avatar, however, this movie would be totally worth watching on smaller, flatter screens as well.

You do that. I went from regular realD 3D on the largest “normal” screen in my favorite cinema to its IMAX projection hall. Aside from the much larger picture—which was also much brighter—what amazed me most was the difference in sound quality! Especially during the night scene I could pinpoint every bullet that hit the ground. The 3D effect in itself was not really perfect and I noticed flaws throughout, as is hardly avoidable with 3D conversions, but some scenes did benefit from it.

Also, I liked the film on second viewing much more than before. It was somehow even more interesting to watch and emotionally gripping.

“Fury Road” exists in a different league from the previous films in the franchise.

Enjoy the movie, but for God’s sake don’t drive home.

It wasn’t playing in the IMAX theater near me so I went with 2D, because the regular 3D screenings here are a mixed bag - some of the theaters are good, and some are I guess still using old tech (too dark etc.), and you never know what you’re going to get. I read on a site that discusses whether to see a movie in 3D or not that that in normal 3D theaters the night scenes in this were too dark.

I actually really enjoy 3D movies (even though it doesn’t add much to most) but since this wasn’t actually filmed in 3D and I was worried about the dark scenes I felt justified, and it was still great.

I think I already knew I’d be going to see this more than once, but I’m going back to see it in 3D for sure. George Miller did apparently want to do it in 3D and there are definitely some scenes that seem planned for 3D.

Anyway I think the only thing that was disappointing to me is that it isn’t Australian enough - especially since they didn’t even film there (I didn’t know that ahead of time but it was obvious pretty quickly… the sort of thing a geologist notices I suppose). Part of the fun, for me at least, in the original films is the Australian accents and quirks, and the unique Australian desert scenery, which is distinctly different from what you normally see in film. And I love that the first film was dubbed in American for the original US theatrical release (though I wouldn’t recommend actually watching the dubbed version, which is on the DVD).

I saw it with my parents, and found out that apparently my mom was really into the original films when they came out. Somehow I grew up not knowing this even though I got really into the movies when I first saw them around age 12/13.

So, that relationship between Immortan Joe and his Warboys.

This movie is awesome

Netflix wasted no time between renewing Stranger Things and releasing a teaser for season two which consists solely of episode titles.

@Donald_Petersen - have you seen THIS?

Oh, yes… yes indeed, saw it a couple months ago, head exploded! But always delighted to see it again! Thanks!

Man, if that was extended by a couple hours, I’d never need to see another movie again in my life.

I would also need the sequel, “Star Max”.