The (new) Munsters will live in "hipster" Brooklyn

I would have watched that sooooo hard. I loved the pilot.

Remember “Being Human”? When they first announced it, it was listed as a Comedy, so I was anticipating a silly English comedy with a 20 something Vampire, Werewolf, and Ghost doing 20 something things in London. Holding jobs, going to college, working crappy jobs, etc. I was quite disappointed when it was revealed to be a Dramedy (mostly serious drama with a whisper of comedy).

I can’t be the only person that remembers this: The Munsters Today is an American sitcom and sequel to the original 1964–66 sitcom The Munsters that aired in syndication from October 8, 1988 to May 25, 1991. The series concerns the day-to-day life of a family of benign monsters, with married couple Herman Munster (Frankenstein's monster) and Lily Munster (a vampire). Lily's Father, Grandpa is also a vampire lives with the family. Herman and Lily have a son, Eddie, who is a werewolf, and their niece, Marylin, also lives them.

I should but I don’t

What Munster character correlated to the creature from the Black Lagoon?

Uncle Gilbert (albeit not a regular character). 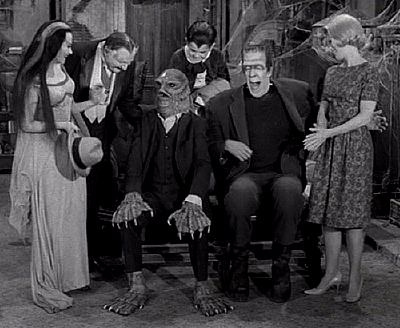 I don’t remember that one at all.

How on earth did “The Munsters Today” last for 3 seasons? I saw the pilot and was not amused.