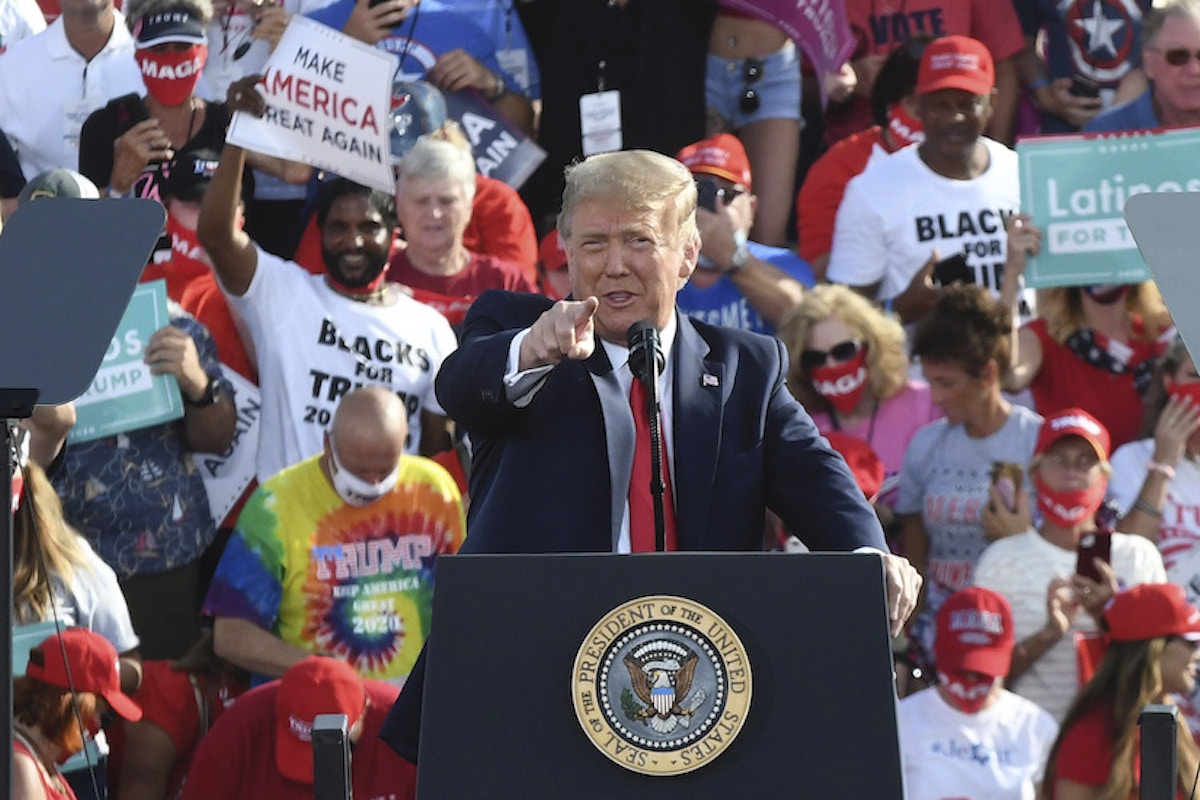 A former cult member who promotes anti-Semitic and racist conspiracy theories shares the spotlight with Trump.

On his website, Symonette makes a variety of bizarre claims, including that Omar and other prominent Black Democrats, artists and athletes — including former President Barack Obama, Jesse Jackson, Spike Lee, Colin Kaepernick, and Rep. Maxine Waters, D-Calif. — are “DECEVING [sic] FAKE BLACK PEOPLE WHO ARE REALLY INDIANS!” In a sermon now deleted from YouTube, he claimed that the Senate is controlled by a secret underground of “Cherokee Mormons.”….

SYMONETTE WAS KNOWN as Maurice Woodside until 1992, when the black supremacist cult leader he followed, Yahweh ben Yahweh, was jailed for leading a conspiracy to murder 14 white people in initiation rites. Woodside was among the Miami-based Nation of Yahweh cult members charged in two of the murders, but he was acquitted. After the trial, he changed his last name to Symonette, which was his father’s surname, before eventually reinventing himself as Michael the Black Man, a pirate radio preacher who delivered broadsides against gays and Democrats.

Thanks: that helps me understand why in the world they were able to find so many Black people to sit behind him while wearing those t-shirts. Honestly, I thought they were paid extras, but this makes more sense.

It’s probably a combination of both, I’d guess. There is plenty of evidence to suggest that at least some people coming out to visibly support Trump were paid extras, but there are also enough Black Americans who embrace Trumpism, so…

Despite denying claims in 2015 that the Trump campaign paid actors to appear at rallies as supporters, a former Trump aide now says those claims were accurate.

Economist confronts Sean Hannity on energy production claims: "You're all...

Austan Goolsbee denied one assertion after another as the Fox News host attacked the Biden admin's energy policies on his Friday show.

May his karma be swift and painful.

Yeah, that’s who wrote the rant-appended–to-a-rant I mentioned here:

The RS article links to the “quitam” [sic] that SoRelle (says she)* filed with the SCOTUS. Reading it is like kicking over an anthill and watching that for a while (i.e. “interesting, but why am I doing this?”). It’s a rant, with appended rants (and while IANAL I’m going to wager that legal filings typically don’t switch in-and-out of using the second-person). If it’s actually reached SCOTUS I suspect it’s still making its way from one desk to another, but that it will end up in the round file…

The RS article, linked by @Akimbo_NOT, brings this around to Oath Keepers.

He’s been grifting too long for it to be swift.

We’ll have to settle for it being long and painful.

Swift in delivery, long in execution.

I loathe self-hating racists even more than I do the regular, everyday bigots.

Mike Lindell Rages At 'Disgusting' Fox News For Not Talking About Election 14...

“When was the last time you’ve seen anybody on Fox talk about the 2020 election?" the pillow magnate complained at a Trump rally.

This plot is heating up. Prosecutors granted immunity to an ex-girlfriend of Representative Matt Gaetz before she testified last week in fr...

No state has such a force, which Gov. Ron DeSantis (R) wants empowered to arrest voters and others who allegedly violate election laws.

Hmmm, I wonder what criteria they would use to determine who might be violating those laws?

Guess it’ll just be a mystery

Fla. will not be last state to go this route thanks to these assholes:

The voting rights struggle most clearly demonstrates the leverage of the new Republican axis. But the same pattern is coming into view on abortion. Republican-controlled states, including Alabama, Mississippi, Texas and Oklahoma, have passed a torrent of laws in recent years severely tightening or virtually eliminating access to abortion, typically over preponderant opposition from Democratic legislators. Courts have blocked most of those laws from taking effect because they violate the Supreme Court’s 1973 Roe v. Wade ruling, which established a nationwide right to abortion. In other cases, the laws are “triggered” to go into effect only if the high court overturns Roe. That day may be coming: In oral arguments during a challenge to the Mississippi law banning abortion after 15 weeks (as well as the decision not to temporarily block an even more restrictive Texas statute), the GOP-appointed Supreme Court majority has signaled it may overturn or severely weaken Roe in a decision next summer. The odds are near zero that any of the three Democratic-appointed justices would join in such a ruling.

The House of Representatives has already responded: Again on a majority-rule, near party-line basis, the Democratic majority approved legislation last September codifying a national right to abortion. But because of the filibuster rule that requires a bipartisan supermajority, that legislation is doomed in the Senate.

Multiple Republican-controlled states also are squeezing First Amendment rights by limiting how public school teachers can talk about race. The filibuster likely precludes any federal legislative pushback against those moves, and it’s unclear whether this Supreme Court will constrain those state laws (though some civil rights advocates hope that libertarian impulses might lead at least some GOP-appointed justices toward opposition). Likewise, multiple red states have passed laws targeting transgender young people (for instance, by barring them from competing in high school sports). The House, on another majority-rule, near-party line vote, last year passed legislation that would override those laws, but that bill too is blocked by the Senate filibuster.

Again it’s unclear whether this Supreme Court will intervene against the states in the lawsuits brought by LGBTQ rights groups; to the contrary, some legal analysts believe that if the GOP-appointed court majority overturns Roe, it might eventually use similar logic to reverse the 2015 Obergefell decision establishing the national right to same-sex marriage. (If that happens, it would allow red states to again bar same-sex unions, while the filibuster would almost certainly prevent Congress, as on abortion, from restoring the national right through legislation.)

All of this points toward a widening divergence in the basic rights available in red and blue states. That’s an America that looks more like it did before Congress and the Earl Warren-led Supreme Court engineered the “rights revolution” of the 1960s and 1970s, which established a broad array of common national rights in area from voting to abortion to discrimination based on race or gender.

Republican elected officials and conservative thinkers who support these trends argue that permitting states more freedom to diverge on questions such as abortion and voting rights reduces political tensions by allowing policies to reflect local sentiments. And they uniformly insist that the voting laws states are passing will merely buttress election integrity without curtailing citizens’ right to vote. Reversing the accusation that the Republican axis is gutting long-standing national rights, many conservatives argue it is Democrats who are seeking to undermine political institutions by eliminating the filibuster or enlarging the Supreme Court, two ideas that have surfaced as possible responses to the GOP axis.

When it comes to how far the GOP-appointed Supreme Court majority may go in allowing red states to roll back previously shared national rights, she adds, “I don’t think we have seen the line, and I think that’s really scary.”

@UrsulaPerano
Capitol Police is beginning to detain voting rights protestors from the Senate steps. The group is part of a hunger strike for voting rights, which have stalled in the Senate. Zip ties going on at least two folks so far. https://t.co/vOjJebYDso
15 Likes
KathyPartdeux January 18, 2022, 6:33pm #3343

You “work” one week a year.

The private police army serving the Governor for Life.

Much like David Brooks, Jennifer Rubin is a conservative pundit who has opposed Trump (she now backs Biden pretty strongly)… so this is one of those “stopped clock” situations, I think. She’s not wrong here, about how the media (of which she’s a part) is still soft-peddling the dangers of Trumpism…

Certainly, the media should avoid rendering a psychiatric evaluation for Trump. But they routinely refuse to convey the abnormality on display before them. This is “the emperor has no clothes” on steroids.

Unflinching, brutally honest coverage would describe Trump’s behavior accurately, including his syntax and preposterous lies . It would concede this conduct would be disqualifying for any business executive or even a small-town mayor. The media are compelled to level with voters: The two parties are not equivalent, in part because one treats its crackpot leader like a messiah . Unfortunately, there are no signs the media are ready for such candor.

I wish she’d say the corporate media, though. Theyre not the only “media.”

@jbouie
very cool that this impossibly callous guy with poisonous levels of self-regard will be on our tribunal of unelected lawmakers for the rest of his life twitter.com/mjs_dc/status/…

Nina Totenberg reports that (1) the Chief Justice asked his colleagues to mask up out of respect for Sotomayor’s health concerns, (2) only Gorsuch refused, and (3) his refusal forced Sotomayor to participate in arguments and conference remotely. https://t.co/DmsQV8j7Wz https://t.co/7JG5hMN0q7
18 Likes
← previous page next page →