The Scary Ham: disposing of an old man's prized meat

That was, without question, the best story featuring a ham I have ever read.

I have no doubt that for the rest of my mortal days, it will remain the touchstone by which all other ham stories are judged, and found wanting.

I have a sudden, inexplicable desire for a Western omelet.

Now I am craving some Jamón ibérico (like bacon, I consider it part of a balanced vegetarian diet).
Her father would probably consider the average Jamonería heaven on earth: 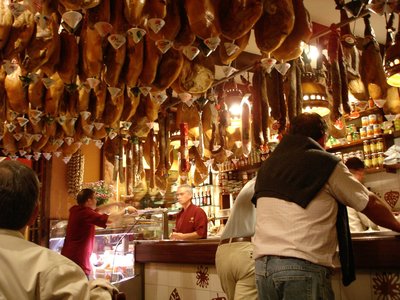 I still don’t understand why they didn’t just light it on fire.

Not a problem with a proper Viking funeral. At sea, the smoke would disperse without causing any harm.

Having spent more than my fair share of time in Ohio, I can assure you that there are few seas to use for a viking funeral. Turns into a double no-no there because there is a definite awareness of keeping flaming things away from public waterways due to the troubles with the Cuyahoga River…

That is hard-core Viking, man.

OTOH, this one had monkeys. More funerals should have monkeys.

Having spent more than my fair share of time in Ohio, I can assure you that there are few seas to use for a viking funeral.

Lake Erie’s only a couple hours north of Columbus. That’s kind of like a sea.

This is the age of the internet. It’s frightening trivial to find someone who lives on the coast who will gladly accept the ham in the mail and then carry out the funeral for you in exchange for being allowed to post the resultant video footage on youtube.

This is the age of the internet.

I was thinking that it would have made a good Steve, Don’t Eat It! story – just 7 years too late.

Sissy. I would have eaten it.

Good point. I mean, it is a Smithfield.

Would you have eaten it in a boat?

Would you eat it with a goat?