Then you will also really enjoy John Malkovich as Ripley in Ripley’s Game based on the Highsmith sequel to The Talented Mr. Ripley. Malkovich as a natural for the character.

I always read the title as The Latented Mr Ripley…

I love all of Patricia Highsmith’s novels. If I had to recommend one above all others, it would be her 1972 thriller, “A Dog’s Ransom.”

The television series Naked City did a comic take on the original story with their third season (1962) episode The Multiplicity of Herbert Konish.

Directed by David Lowell Rich. With Paul Burke, Horace McMahon, Harry Bellaver, Nancy Malone. Mild-mannered Herbert Konish is living multiple simultaneous and separate lives, stumping the detectives who are trying to figure out exactly who he is and...

I enjoyed all five books. Of course, after that last paragraph, I’m now going to wonder about Derwatts as the blue meth of the art world. (Though I’m fairly certain Bernard Tufts would never finish a sentence with “bitch”)

Whilst people are talking about adaptations I have to say that my favourite was the BBC radio adaptation of the entire series from a few years ago with Ian Hart as Ripley. For the most part, they stayed relatively true to the books but added an interesting first person twist by giving Ripley some more deviousness through soliloquy. Lovely stuff (if you’re into radio drama that is)

My introduction was “Purple Noon”, with the amazing Alain Delon in the lead. It differs quite a bit from the later “Talented Mr Ripley” film with Matt Damon. The former has a lot of silence, more character development, and the ending is changed to be more similar to a Hitchcock Presents type of story. Damon’s version as I remember is closer to the novel, has spectacular and engaging acting, but struck me as kind of weird. Philip Seymour Hoffman as Freddie Miles is legendary.

All are highly recommended!

I don’t know if it’s an exact fit, but I’d recommend the Stainless Steel Rat series by Harry Harrison. Pulpy, fun science fiction with a self aware and resourceful anti-hero. I enjoyed them as a kid, and kept a few for my own. 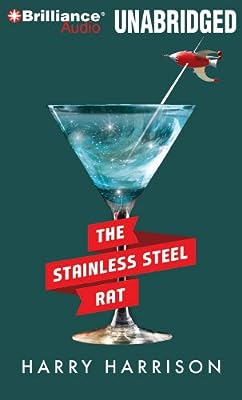 Jim DiGriz is caught during one of his crimes and recruited into the Special Corps. Boring, routine desk work during his probationary period results in his discovering that someone is building a battl ...

I wonder how much Single White Female owes to the Ripliad; Jennifer Jason Leigh’s character in SWF seemed to be more sick than psychopathic, but still.

While I enjoyed the book, my complaint about it was the title. Ripley wasn’t that talented: according to the book, his talents were forgery and (I believe) good at foreign languages.

I’ve really enjoyed everything I have read of Highsmith’s, though the Ripley novels have been my favorites, for sure. I discovered her after reading David Cochran’s book America Noir, probably eight years ago. Also introduced me to Chester Himes and Jim Thompson. It was a really good resource for discovering new writers in a genre I was just starting to appreciate.