The time it takes to be a woman

Doesn’t surprise me much, but I fall on the girly side with the hair-washing. I’ve been doing a 2-step shampoo/conditioner routine ever since I started growing my hair long in 1988, and even though my hair is shaggy rather than long these days, I still can’t get out of the shower in fewer than 12 minutes, whereas my wife (with her long, lustrous locks) can be in and out in 5 minutes.

But then, I’m slow at almost everything. And since she rarely wears makeup except when going out someplace fancy, she can get from falling out of bed to showered and dressed and on the street in under 10 minutes.

By that time I’ll have peed, brushed half my teeth, and hopefully found a pair of socks.

It takes even less time to be a really gross dude.

So, if I’m correct, what your basically saying is that men and women are different in many ways, or in just a few ways.

I can totally confirm this. I presented as a woman until the age of 40. The cost and time it took to be feminine? Sooooooooooooooooooo much more. I spend a fraction of what I did on clothes, toiletries, etc, and spend a fraction of the time. That’s with a job where I occasionally have to wear a suit, and a penchant for designer branded mens clothing. 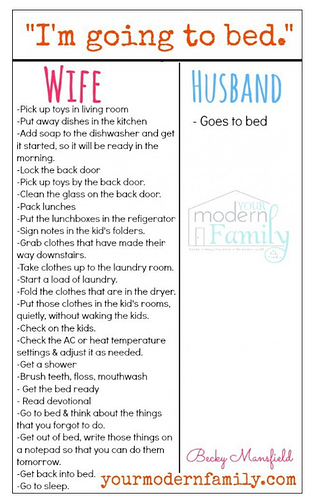 But they live longer, so it all evens out.

Someone please explain to me how this is an example of the patriarchy keeping women down. I’m pretty sure no one is checking to see how long women spend in the bathroom. They can spend as long or short a time as they want, it’s completely up to them.

Hi! Welcome to the BBS!
Can you quote where in Xeni’s post or the article or the video where they said

how this is an example of the patriarchy keeping women down.

Because I cannot seem to find that anywhere.

Come on saying that women take substantially longer time to decide what to wear or what clothes to buy is down right sexist stereotype.

Good chunk of the rest revolves a lot around maintaining really long hair. One can be as feminine with short hair. And lets not even talk anout beard grooming routines.

just on washing their hair. Other, more gender-neutral activities – like brushing your teeth and using mouthwash – are about equal.

I never really considered whether brushing teeth or washing hair was more gender neutral than the other.

There’s a 90’s comedy routine in there somewhere…
“you ever notice how it takes a woman a full three minutes to wash her hair?!.. it’s true isn’t it? don’t deny it ladies… any man in here will tell you how long it takes to shampoo hair… two minutes! right? women, what are you doing with that extra minute?”

Glamour narrows the concept of ‘woman’ and ‘man’ down to two very slick people. Hardly anyone I know look like this.
(Mind you, no idea if the which look you go for affects preparation time).

Speaking of me and my fiancee this is true though…
I have to admit that i never really cared much for dressing, but as far as i can tell this is quite common for men, even if not at my levels.

Women tend to have longer hair. The majority of ladies don’t have crewcuts. I’ve had long hair and I’ve had a shaved skull. Astonishingly, it took longer to wash/condition/dry the long hair than it took to do the same to the NO HAIR.

Well anecdotally anything can be true. I mean, I also notice it when my wife takes long time to select what to wear on particular occasion but what I don’t notice is when I take my sweet time doing something trivial that should have been done in 3 seconds. Heck it takes me half an hour to shave and at least 15 mins to tie a tie knot (including time to google the instruction video on how to do it)

What bothers me with this video is that it picks one particular (very narrow) subtype of women and compares it to one particular subtype of men and than tries to generalise the results. All the time perpetuating certain stereotypes.

Well, i admit i didn’t watch the video…

The point of stereotypes, and prejudice is that they may be sometimes unavoidable, and even true. The real problem starts when they are not seen as what they are, a statistical (often quite skewed) evaluation due to lack of information, but become truth in the eye of the individual or society that holds them.

Are they still trying to foist this metrosexual nonsense on us?

Shit, shower, shave. Anything else is the road to decadence.

Quite. A single bar of Johnson’s baby soap takes care of the shower, the hairwash and the shave.