Deport him to Hong Kong

I’m shocked! Shocked, I tell you!

They’ve been doing that shit here too.
PDX

That is the only video I’ve seen of him, although you can see other people with their phones out. I always wondered just how far they were able to follow him, seems like with all the security cameras on stores and light poles the police could have gotten a license plate or clear image of him once he slipped away from the legit protesters (and maybe that’s what finally happened, hence the warrant.)

This isn’t the only place this has happened, either. There are reports of white supremacists masquerading as BLM protesters to start shit elsewhere, where they were caught.

How much do you want to bet Trump and other right-wing gasbags who complain endlessly about antifa violence will continue to cite this video as an example of left-wing Anarchy Gone Wild.

Of course they will - it’s a certainty. They blamed antifa for the Boogaloo-related murders, even when we knew who was responsible. They’ve invented crimes for the protesters, to make them seem more dangerous. They’ve been using images from protests outside the US as part of scare tactics in political ads. Trump simply declares that black is white and the Portland protests were a problem until he sent federal law enforcement and now they’re quashed. Reality simply doesn’t matter.

There’s a second video that shows Pink Shirt Guy continuing to bird-dog him, but other videos show PSG putting out a lot of small fires between protesters, and protesters/police. He probably had to break off to tackle a more immediate problem.

That’s funny, I thought Umbrella Man had already been identified as a cop named Jacob Pederson. The police claim he had an alibi, but as we all know, the police are liars and cannot be trusted at any time. Until they have this guy confessing on camera and sentenced, I’m still calling bull puckey.

This isn’t the only place this has happened, either. There are reports of white supremacists masquerading as BLM protesters to start shit elsewhere, where they were caught.

Richmond, Virginia…just the other day. 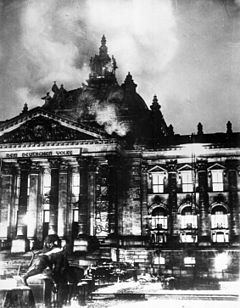 The Reichstag fire (German: Reichstagsbrand, listen (help·info)) was an arson attack on the Reichstag building, home of the German parliament in Berlin, on Monday 27 February 1933, precisely four weeks after Adolf Hitler was sworn in as Chancellor of Germany. Hitler's government stated that Marinus van der Lubbe, a Dutch council communist, was the culprit, and it attributed the fire to communist agitators. A German court decided later that year that Van der Lubbe had acted alone, as he had clai...

They were met at the site by Hermann Göring, Interior Minister of Prussia, who told Hitler, “This is Communist outrage! One of the Communist culprits has been arrested.” Hitler called the fire a “sign from God” and claimed it was a Fanal (signal) meant to mark the beginning of a Communist Putsch. The next day, the Preussische Pressedienst (Prussian Press Service) reported that “this act of incendiarism is the most monstrous act of terrorism carried out by Bolshevism in Germany”. The Vossische Zeitung newspaper warned its readers that “the government is of the opinion that the situation is such that a danger to the state and nation existed and still exists”

Anyway, everyone knows how much those nazis like smashing windows 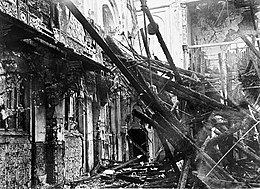 Kristallnacht (German pronunciation: [kʁɪsˈtalnaχt] (listen)) or the Night of Broken Glass, also called the November Pogrom(s), was a pogrom against Jews carried out by SA paramilitary forces and civilians throughout Nazi Germany on 9–10 November 1938. The German authorities looked on without intervening. The name Kristallnacht ("Crystal Night") comes from the shards of broken glass that littered the streets after the windows of Jewish-owned stores, buildings and synagogues were smashed. Jewish...

This happened in Philadelphia, too. Video of a white dude smashing windows with a skateboard, while black protesters tried to stop him.
Guess who was arrested?

If I was going to guess what this phrase meant I’d say it sounded like a particularly unappealing sexual subculture that was heavy on leather, such as the trio Butch & Marsellus run into in Pulp Fiction.

They’ve been doing that shit here too.
PDX

Cars with Florida plates were showing up near the demonstrations in L.A. In nearly all the footage I saw the glass breakers, not to say the subsequent looters, appeared to have white skin.

It is similar to the agents in Oakland in December 2014. I had commented at length as to why they’d do this.

Straight out of “The Turner Diaries” favorite reading of US White supremacists.

Also, Trump sending out federal LEOs is his Reichstag fire. He’s so transparently interested in creating chaos and then claiming victory (even when his narrative is the opposite of what observably happened). Each use of the feds “justifies” the next use, and so on. Gods only know what he’ll be justifying by November.