Originally published at: A large gang of men from at least 11 states intended to violently disrupt a Pride event in Idaho | Boing Boing

Police have confirmed that these folks did not come “to engage in peaceful events” and have taken them to county jail.

When I say this is happening now, and people say I’m over-reacting, I repeat, it’s happening NOW and there are good reasons to consider redlines having been crosses and people need to absolutely think about their safety and their family and friends’ safety.

im not really sure what youre getting at.

lgbtq idahoans and their families and allies deserve to be able to live in their home state as out ond proud as they want to be.

if people are crossing state lines to come attack them, where are they supposed to go anyway?

i think they’re doing the rational thing: organizing events, building community, and being mindful of risk.

all wearing the same clothes, including khakis, with navy blue shirts, beige hats, and a white cloth covering their faces.

I guess they changed up the uniform a little after they learned how hard it is to get flop sweat stains out of a white polo shirt. 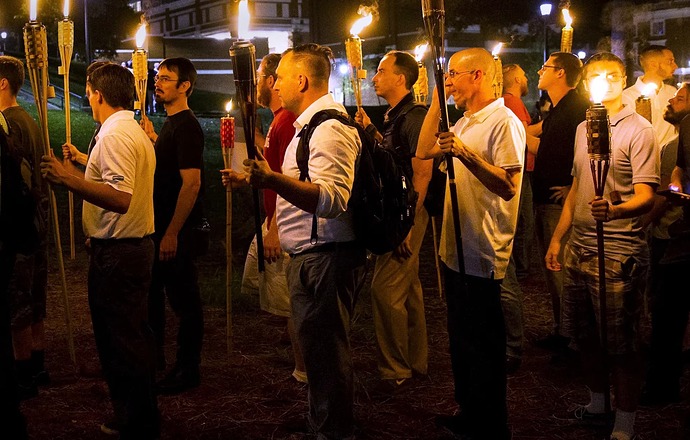 I said it the last few one this happened.

Another question is why they thought it was a good idea to rent a U Haul when I’m sure a bus would have been the same price. But I bet they thought that a) they could more easily slip away in one and b) they would look like this [image]

And this isn’t hyperbole. This is exactly the type of thing the fascist street gangs of the thirties did.

They were in disguise as lesbians moving in together as their second date. Genius!

I hope these Nazi fucks rot in jail. This is the best result possible for all concerned; caught, arrested, thrown in jail, no disruption to Pride.

if people are crossing state lines to come attack them, where are they supposed to go anyway?

I’d also add that so-called blue states are not immune from fascist direct action, either. Last year in California, Proud Boys from Bakersfield came into several liberal L.A. neighbourhoods (including the gay enclave of West Hollywood) with the goal of instigating violence.

We must fight these arseholes wherever we find them in the country, because they are everywhere and are intent on making sure there is no place where those they hate (including most of the regular commenters on this site) can run. 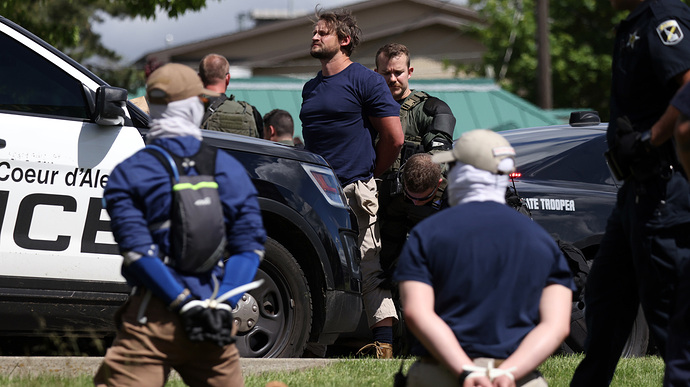 31 members of the white nationalist Patriot Front arrested near an Idaho...

Police said the men came from at least 10 states and were planning to riot at a Pride event in the city of Coeur d'Alene.

They were charged with misdemeanors…

The men, who traveled from at least 10 outside states, are expected to be arraigned Monday on the misdemeanor count.

But now they’ll all be on FBI watchlists, right? Right?

Well, they did say they were coming months ago. I posted about it on this very forum.

I hope they’re all confuselled now because, ha, the cops busted them!! Bet they thought they were getting an escort, the fuckers.

Couple more strikes and they can rot in jail forever.

As long as they were stopped from turning the pride parade into yet another fucking massacre, I’d call that a win in the short term.

Well, they did say they were coming months ago. I posted about it on this very forum.

Back in the 80s and 90s when right wing, racist skinheads were becoming a real problem in punk scenes, one thing that tended to work, was when a neo-nazi racist shows up at shows, you stood UP to them, and did not let them get away with shit. Throw the fuckers out. You do that a few times, they stop coming to punk shows, because the community has shown that they will not put up with their shit.

Standing up to them is scary as fuck - but we have to do it, every time. Together is the only way we win.

Lock these f-kers up for life

but we have to do it, every time. Together is the only way we win.

There was a reason why the favorite tactic of right wing skinheads was to isolate people to beat up… that’s because they know that they can’t win if people are united against them. It’s why when the guy from the Dropkick Murphys called out those Boston racists for using their songs and then challenged them to a rumble, the cowards didn’t show up. They knew they’d lose.

I saw a pair of skinheads in the street a while back, shaved heads, traditional green coats with orange lining, tight jeans, DMs.

It was Brighton, though, so they were hand in hand.

But now they’ll all be on FBI watchlists, right? Right?

I’m pretty sure a lot of them were on a FBI watchlist before this already. At least the Patriot Front’s leader, who was one of the arrested people, if not the others.

“It appears they did not come here to engage in peaceful events,” Kootenai County Sheriff Bob Norris told our partner the Coeur d’Alene Press. 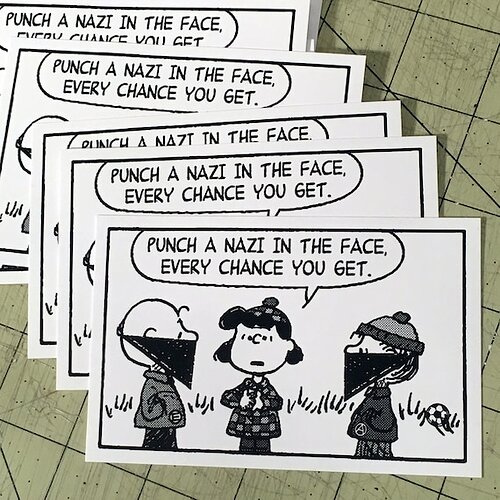 Punch A Nazi In The Face, Every Chance You Get WeatherProof Vinyl Sticker - 2.75 x 4.25

I hope they make a big huge example out of these people. We all need to fight back against this, but it would help a lot if it were “officially” discouraged by prison sentences for these fucks.