The Year We All Wore Kigurumi

I have a dinosaur. I’d wear it everywhere between November & May, but the tail makes it difficult to cycle in. I have thought about getting a second, more practical one, but the idea of buying a “more practical” fleecy animal suit belongs to a universe I can’t quite reconcile myself to.

hmm. at least i will now be able to confidently pinpoint the moment where i totally fell out of sync with popular culture, i guess.

My daughter occasionally wears her Totoro to school. This is a regular, public high school with a fairly relaxed dress code; basically they don’t care what you have on as long as it’s covering your bits.

In mainstream culture, Furries are weird, suspected of being sexual deviants, and clueless news commentators laugh when they hear about a gas attack at a Furry convention.

But in mainstream culture, Kirgurumi are cool?

We live in a strange world.

For me that year was 2009. I went to an anime convention and it was crawling with teens wearing kigurumi. At the time I thought they were using them as ersatz cosplay outfits, but in hindsight they were probably just happy mutants gathering together to share the experience of the latest Japanese fad they had latched onto. Still, it was a bit disconcerting to literally see herds of teens running around in these.

There’s no fur on kirgurumi.

I had to read this article to even know what it was.

I, for one, welcome our new fuzzy-animal overlords.

Kigurimi come in all sorts; I’ve seen Superman kigurimi, spacemen, and plenty of licensed characters: Cookie Monster, Totoro, Winnie the Pooh, Tigger, Donald Duck, etc. They’re worn for comfort and coziness and to be playful. I just saw a rack of them at Target for about $30, and when I was in Australia not long ago, I saw drunk college bros wearing them to bars as if it was just a normal cool dude thing to do.

Only a small number of furries wear fursuits, and they’re always full-body suits covering the whole head, completely masking the person’s identity, meant to take on a whole different persona. And they really aren’t too comfortable (typically). Folks look askance at someone paying a professional $3000+ for a custom animal costume.

In mainstream culture, Furries are weird, suspected of being sexual deviants, and clueless news commentators laugh when they hear about a gas attack at a Furry convention.

But in mainstream culture, Kirgurumi are cool?

We live in a strange world.

I wouldn’t call them “mainstream” yet by a long shot. They’re a fad that’s popular in certain circles.

On the one hand, it’s kind of dumb, but on the other hand, anything that makes furryphobes squawk and shit themselves in alarm makes me smile, so I’ll have to allow it.

That kangaroo wandering around the house turned out to be my daughter. She was not well pleased when I asked if she had joined the Furry life-style.

Furry has now become mainstream. This pleases me. 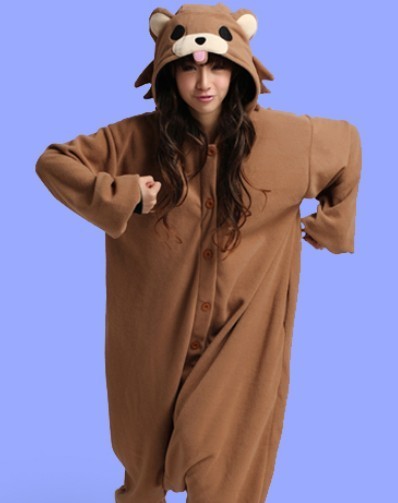 Never heard of these outside of Boing Boing.

And I live near Portland OR.

Maybe they’re not popular here because they’d get soggy in the rain?

Two things come to mind when I read about these:

In the Disney version of Peter Pan, many of the Lost Boys wear animal suits kind of like these.

Max’s wolf suit in Where the Wild Things Are.

another sign that this is not the best of all possible worlds. in a perfect universe, no one would think twice about acquiring fleecy clothes.

edit: just bought one of those cheap onesies mentioned in the article, 13$ for a full body article of clothing with a butt flap? even my poor college student self knows that’s a good deal. at least in the frozen north where I reside.

I have a onesie that I wear in my office in the basement, which I don’t have to heat at all any more. Definitely worth it.

Peter Pan, many of the Lost Boys wear animal suits kind of like these.

Max’s wolf suit in Where the Wild Things Are.

Those are exactly what these are. Perfect comparisons. Basically fancy footy pajamas.

Adults trying to be cute are not.