Hello friends. I’ve mentioned the Irish musician/filmmaker John Dog here before, when he released the hilarious video for his Swiftian/Costelloesque “London Falling”, a Brexit lament.

But just today he has really, really excelled himself with his latest hilarious creation “Under The Bed”, which is about, well, everything! I’m not even going to TRY to do it justice in words this time… but it’s packed with genius little touches, both visual and musical, and I promise it’ll make you laugh. (btw it’s short too!)

Like everything Mr. Dog creates, this is prime Boing material. Hope you enjoy it as much as I do

That is wonderful! What a clever video.

I recognize some of the parodies but not all.

Obviously that is Rogan interviewing Musk near the end, when his head blows up, haha
Am I right to think Walter Cronkites moon landing broadcast was in there?
Who was the real guest on the Dick Cavett show that was replaced with the singer?
What about the older news clips, are they real historical references?
And what is TRE?

Right on all counts! Please excuse crappiness of my MSPainting… 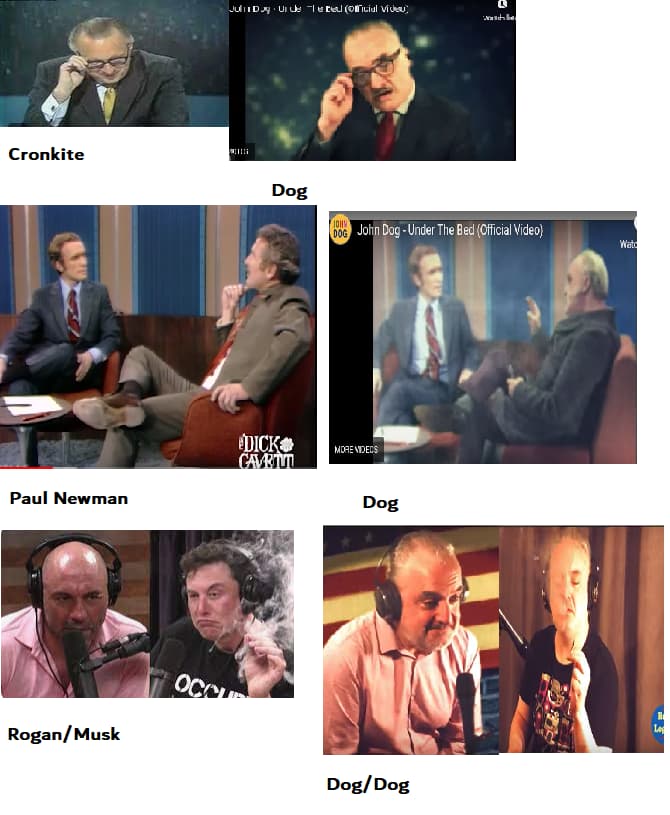 Side-note, DAMN this was fun, anyone got any other multi-parody videos we can go forensic-archaeological on?

Thank you for doing that, very cool.

This really is very funny and there’s a lot packed in there. Reminds me a bit of the Onion News Network of the early 2000s.