The UK is plagued by a moronic politico just like us, how quaint.

Thank you for explaining what a P45 Form is. There were a few reports today that that just mentioned the form without explaining what it was. I would have understood “pink slip”. It’s what someone needs to hand to trump.

Unlike Rump, she’s been in politics for quite some time and really ought to know better. When the stage itself tries to walk out on you, I think it’s time to call it quits… then again, the characters waiting in the wings for her exit are none too savoury either.

Last night? She finished less than three hours ago.

Has Armando Ianucci taken over as her communications director? That speech was right out of “The Thick of It.”

If only some of the letters fell off the word “country”, like the letters o, r, and y, for example.

I do believe that world politics is now being scripted by Monty Python’s evil twin.

It’s funny because he’s not a city vying for the Olympics.

What the hell is going on here and what did I just watch?

“We did not get the victory we wanted because our national campaign fell short. It was too scripted, too presidential, and it allowed the Labour party to paint us as the party of continuity when the public wanted to hear a message of change,” she said.

“I hold my hands up for that. I take responsibility. I led the campaign, and I am sorry.”

All that and also too shit. Way too shit. She could hold her hands up for being shit but I suspect the focus group results suggested not to do that. Too honest.

No. Think of it as a comedy placeholder.

It’s a crying tragedy that the first ‘o’ in the slogan was so well glued on.

I loved the fact that the backdrop was falling apart as she spoke:

I’m not entirely up to speed on the nuances of UK politics, but is it normal for a leader of the Conservative Party to wear jewelry bearing the likenesses of famous Communists?

Can I just point out that Theresa May is wearing a bracelet of Frida Kahlo, a member of the Communist party who LITERALLY DATED TROTSKY https://t.co/CR13geaO7n 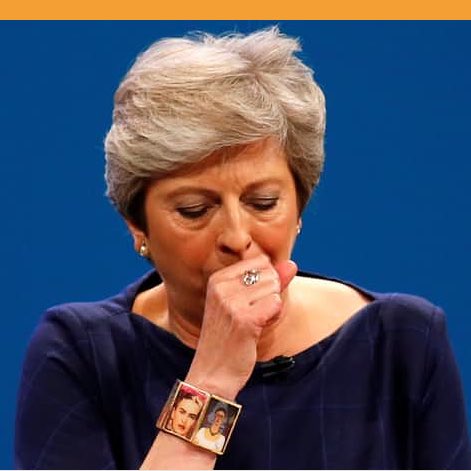 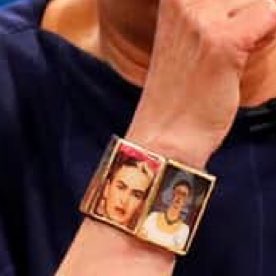