I don’t know any of those people.

Better get to Wikipedia-ing.

Wow, it’s really amazing and bittersweet to see Matthew Shepard listed; twice, even. His murder really kicked off the national discussion about violence against the LGBTQ community. Beyond the tragedy, I’m happy to see his legacy lives on.

Matthew Wayne Shepard (December 1, 1976 – October 12, 1998) was a gay American student at the University of Wyoming who was beaten, tortured, and left to die near Laramie on the night of October 6, 1998. He was taken by rescuers to Poudre Valley Hospital in Fort Collins, Colorado, where he died six days later from severe head injuries. Suspects Aaron McKinney and Russell Henderson were arrested shortly after the attack and charged with first-degree murder following Shepard's death. Significant...

Wow! Very surprised at who came from West Newbury, Mass.!

Went to my little town, found an NFL player I’d never heard of. Turns out he was born there, but went to school elsewhere. Never went back. Somehow, he “out-Wikipedia-ed” Colonel Harland Sanders.

Also… KANYE? ATL? He’s from chicago? Was he born here? I guess so… But he’s not an ATLien… he has been in Chicago since he was 3!

And TRUETT CATHY FOR EATONTON!!!

I come from a small town of 300 people and there are no wikipedia worthy entities… but I am a published comic artist who has won a couple awards. You arent supposed to edit or create your own wikipedia pages, so someone ought to help me out, yo. I can make this happen.

Hmmm… I am not in the US, but I think I know who it’d be for my hometown.

There are more options than you’d think, though. And it’s not a huge town.

Well thats a relief. After the ferris wheel incident at the July 4th carnival last year I figured it would be me for sure, but instead it’s some dude named “Horace Mann”… 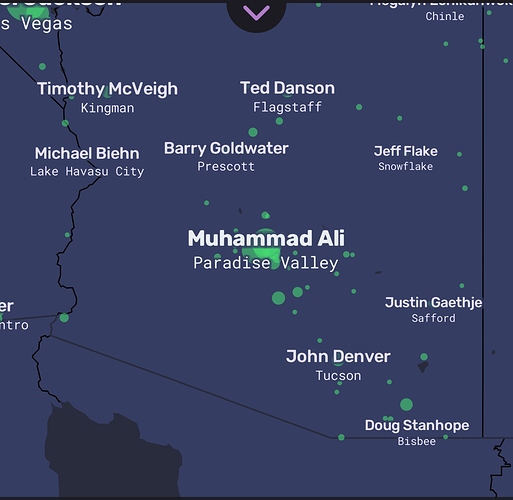 Snowflake is just funny, but I can’t decide which is scarier, Kingman or Lake Havasu. Noting to avoid both.

Also… KANYE? ATL? He’s from chicago? Was he born here? I guess so… But he’s not an ATLien… he has been in Chicago since he was 3!

From what I can figure, I guess the way they did the thing was by which wikipedia article with the city in it was the most searched?