This woman is allergic to water

#This woman is allergic to water

That is most unfortunate.

I feel terrible for someone who suffers that condition, but I can’t help think of…

The headline is a little misleading – whatever it is, it’s can’t be due to the chemical, H2O, given that she’s 60-65% water. How could that even be possible? But I hope they find the real cause, whatever it is, because it sounds like hell.

The headline is a little misleading – whatever it is, it’s can’t be due to the chemical, H2O, given that she’s 60-65% water.

That’s inside her body, the issue lies with her skin.

Think about it this way: your body contains strong acids for digesting food, but if your skin was exposed to those same acids they’d cause serious chemical irritation.

Aquagenic pruritus is a skin condition characterized by the development of severe, intense, prickling-like epidermal itching without observable skin lesions and evoked by contact with water. Symptoms occur for up to 35 minutes; duration of an attack is typically between 10 and 120 minutes. However, sensitivity varies among sufferers, and since water is always present to some extent in the air (atmospheric humidity), those with greater sensitivity who live in moister regions are symptomatic almo...

Wow. I thought the Ani Difranco album was just intended to be metaphorical. But she must have come across this. https://www.youtube.com/watch?v=mAgltYm8_Jk

It’s just weird. There is water in the matrix between cells in the layer just below the dead cells on the surface. And water within the cells, of course. Of course, that’s below rather than above the outer layer of dead cells. I just wonder if it’s some physical process, say, due to water dissolving some sort of toxic chemical incorrectly produced by the skin, and then transporting it across the skin into layers below. The skin is supposed to be watertight, but maybe it becomes porous as part of the process. Eh, too many perhaps.

All I’m saying is that it seems unlikely to me that whatever inflammation is going on is being triggered by the H2O molecule itself. “Allergic to water” is a convenient (and click-baity) term, but it’s definitely more complicated than that.

Interesting, and tragic. I hope she can be helped.

But as others have noted: she’s not allergic to water. She is responding to something that is mobilized, activated, or potentiated by water. The distinction may not matter to her in her suffering, but that’s not an excuse to describe her malady incorrectly.

It is in the same “family”, physical/inducable urticarias, as the dermographic urticaria that this woman uses for her art projects… 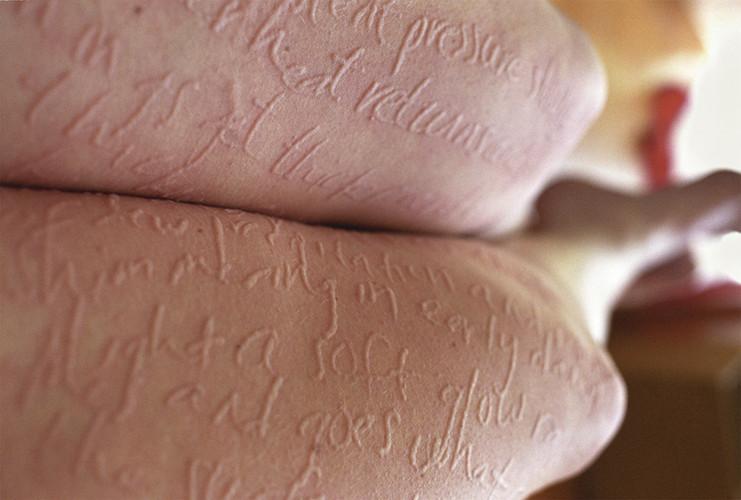 I understand WC Fields had the very same allergy.

On the plus side, she’d be very helpful if you needed to travel around the Outer Rim.

The article doesn’t mention whether the response is acute/discrete, that is to say, a bead of water on her skin creates a bead of water shaped red mark that slowly becomes worse.

If I believed in lizard people, this is the sort of “succesful” outcome I’d expect from one of their experiments. Every time a new rare medical condition is discovered, it’s a new advance in their study of humans. (Hard to call it medicine, since that would ply some sort of improvement of the human condition, and this is the opposite).

The article said that the one drug that helps her is an off label use (of course), which means it isn’t covered by insurance.
I’d find someone who could over-ride that, go into their office and cry, and just keep crying, getting worse and worse until they gave in.

If I couldn’t get access to such a person, I’d just go on the news and do it. Call it a protest, get puffier and puffier until they brought it in for me.

Also: She was diagnosed at 12. So, 12 years of living with this crap BEFORE she knew what was causing it. In addition to the hell of my kid living through that, it might break me as a parent too.

“Allergic to water” headline, all i coukd think was…

“Um, excuse me waiter, does the chef salad contain water? I have an allergy…”

Truly not trying to engage in a pissing contest, but a worse condition comes to mind. My nephew was born with it:

Epidermolysis bullosa (EB) is a group of mainly inherited connective tissue diseases that cause blisters in the skin and mucosal membranes, with an incidence of 20 per million newborns in the United States. It is a result of a defect in anchoring between the epidermis and dermis, resulting in friction and skin fragility. Its severity ranges from mild to lethal. The condition was brought to public attention in 2004 in the UK through the Channel 4 documentary The Boy Whose Skin Fell Off, chroniclin...

My nephew was not expected to live more than a few years in the condition he was in. With a great deal of care and help from others, he’s made it to his early twenties.
As he grew, he routinely had to get his teeth capped for lack of protective enamel, the pain compounded by the procedure. Several times, he had surgery to separate his fingers and toes, until they finally quit because the skin wouldn’t heal and the digits would simply fuse back together again. Even though he’s a man, he only stands a bit over 4 feet tall.
Luckily, a couple of years back, he underwent the latest-wave bone marrow transplantation, and has been improving steadily. He won’t grow anymore, but his skin is improving, and he doesn’t spend his time totally wrapped in bandages any longer.

This photograph made me cringe. I’ve had dermatographia—it can come and go—and can tell you that those raised areas itch. Fortunately, for me, any over-the-counter antihistamine solves the problem. Most people find some antihistamine that provides reasonable relief.