Originally published at: Three children were injured as a landing Sheriff's helicopter blew a bounce house into the air | Boing Boing

I found it odd that ABC’s newscaster’s report suggested the Sheriff’s department felt the fact their presence was anticipated at the show absolves them of any blame?

That’s not how negligence cases work.

Warning: police may fuck your shit up.

Hey they didn’t shoot any of the kids did they? What’s broken bones, internal injuries and psychological trauma compared to blowing holes through them. People are so sensitive about their kids. And now that the Supremes have announced they’re gonna kill Roe v Wade they will tons of replacements. Get tough america. /s

To SeRvE aNd PrOtEcT.

In a literally true but abjectly non-vernacular sense of the phrase I think we can conclude that someone failed to secure the LZ. 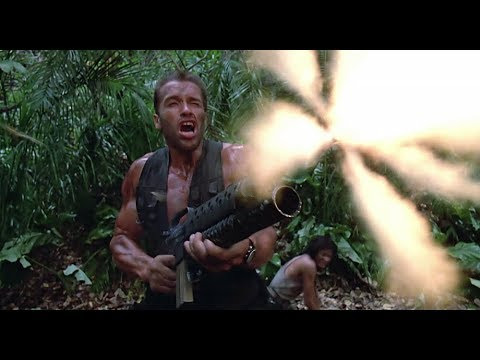 When I typed in “Get to the…” to search for the above image, Google popped up the following 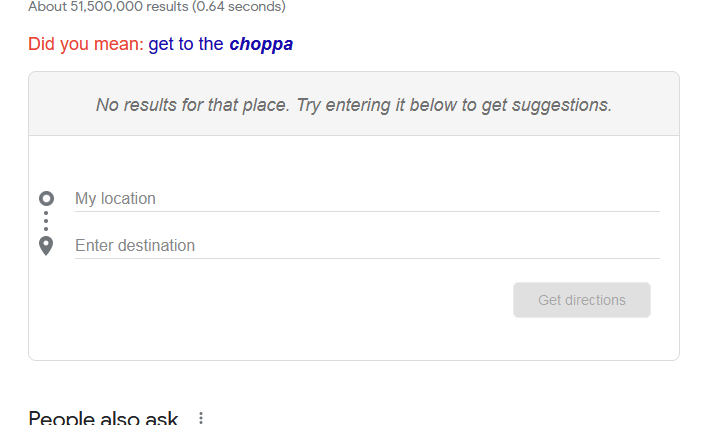 “I found it odd that ABC’s newscaster’s report suggested the Sheriff’s department felt the fact their presence was anticipated at the show absolves them of any blame? “

I didn’t interpret it that way. I think the police saying that the helicopter’s appearance being publicized ahead of time was in response to the parent who claimed that they were given no warning that a helicopter would be there. Either way, it was a bad idea to have the bouncy house and helicopter in close proximity.

Either way, it was a bad idea to have the bouncy house and helicopter in close proximity.

I wonder if it was staked down? Inflatables like this have been involved with a ridiculously high rate of injuries and deaths, with most of the dramatic accidents being a result of improper staking, or no staking at all. On a calm day it’s easy to convince yourself that it’s not needed, or that a half-assed job is ok. But freak wind events happen all the time, even without helicopters in the area. 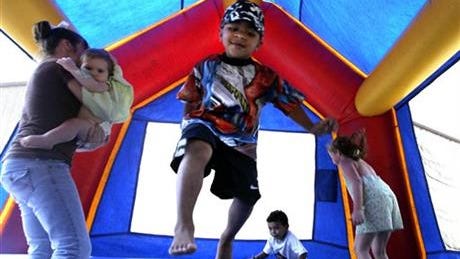 Thousands of kids have been injured while playing in bounce houses thanks to lax regulations and low enforcement.

Not to sound unsympathetic, but it could have been much worse. Six children died in December last year when a jumping castle blew away in Tasmania. The kids were lifted 10 metres into the air and fell from the jumping castle (our version of bounce house).

I find it easy to feel sympathy for all children, equally. Except for Stephen. Stephen’s an asshole.

Hm. I’m gonna guess that the rise in injuries started when individuals could start renting bounce houses for their home parties… when I was a kid you ONLY saw them at fairs or corporate events (the first place I saw one was at a festival hosted by the factory my dad worked for). Now my BIL regularly rents them for his kid’s B-day parties.

I find it WILD that the news clip here uses policespeak that obscures police agency in causing harm. We’ve all heard it when police shoot and kill people, but just listen to what they say with a chopper flipping a bounce house full of kids:

• They lead with “Three children have been injured” (by whom? by what? Also, from what I can tell, 3 kids were sent to the hospital but more than that were injured)
• “in an event involving a bounce house” (yeah, let’s imply that it’s the bounce house that’s the main source of injury and danger. Also, note that it is a very neutral-sounding ‘event’ first not an ‘incident’)
• “and the incident involved a huge gust of wind created by a sherriff’s helicopter landing nearby” (comically circuitious arrival to the fact of the sherriffs being at fault, oops, I mean the sherriffs’ helicopter. Also a gust of wind sounds very natural, an act of God almost)
• “A woman who does not want to be identified says her children were among the victims and she claims her kids suffered injuries from … being hit by debris or being thrown to the ground” (to me, it seems weird and undermining [of the woman] to say “she claims” and then show pictures of the kids’ injuries. Is there doubt here?)
• And Jason also noted how the newscaster regurgitates the ridiculous police defense that it was a known a helicopter would be there as a response to the families having no warning that their kids were about to be literally blown away.

Plus, I always find it a good exercise to imagine how this would be reported if it wasn’t police harming people. Imagine if somehow a bounce house full of kids got inadvertently flipped by, say, people protesting injustice or by any marginalized group and not Amerikkka’s gun-toting, neighborhood-occupying darlings who can do no wrong.

I wonder if it was staked down?

Or staked enough: little tent pegs vs. long pieces of rebar hammered in. An experienced Burner might have a good idea of how much staking something that size needs.

There should be some sort of (verified) manual/documentation provided by the manufacturer addressing this (and other points like maximum load etc.).

It’s probably an nth generation knock-off of the original design, and the manual is not in English.